This weekend was super quiet with my mom and the doggies still on the Southside of town and Austin spending the weekend with Fat Pat and his baby mama. I struggled with miserable headaches that I was calling migraines but truly, were probably just sinus headaches because now I'm snotty and my ears hurt. On Sunday I was in the kitchen forcing myself to choke down some soup (because I realized that eating two Little Debbie cakes was not making for a nutritious diet for me today) and I realized that it may be a long time before I'm THIS alone again.

Next weekend my parents are moving out of the house they've lived in for 37 years and will be full time residents of White County. This house is big - three times the size of the house they're moving from - but for me, after spending so much of the past few years with just myself and Austin, it's an adjustment to live with other people. But it's not a good thing to be alone. 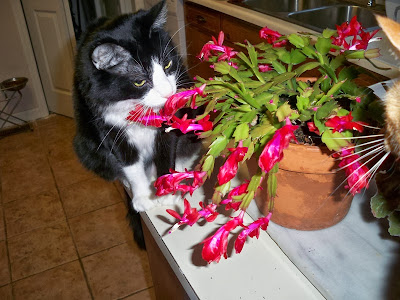 This weekend has reminded me how hard it is to feel really bad and not have anyone around to help. My head hurt so bad on Saturday that I couldn't think straight, even after throwing everything in the medicine chest at it. The only thing that helps me when I have bad headaches is ibuprofen liquigels. I don't know why. I've been on the most expensive headache meds known to man and they don't do the trick like a good advil will. But I was out of advil. And I was alone. I had to just suffer through it. I even carried the phone down to the Whine Cellar with me because I was afraid I was going to need to dial 9-1-1 with some kind of stroke or something. It hurt that bad. Fortunately quiet house also equals great sleep and I fell asleep much earlier than usual and slept much more deeply than usual and woke up still feeling icky but the headache was gone. 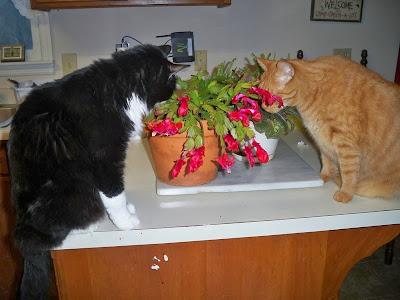 Rather than allow myself time to talk myself out of it... I got a shower, did the most basic glam routine and ran to the store to buy advil. Not going to get caught again with a nasty headache and no way to treat it! I'm relieved that those days of suffering alone are over, at least for the near future. I am a fiercely independent person and I can promise you that my dream home was never "my parents' basement" but life is what it is. If I'm going to be single, mostly empty nested and live with pain, I'm glad to not have to face more nights like Saturday. It is more than just an inconvenience to be alone and need something that you can't do for yourself.

As I said, I've self diagnosed my headaches from last week as sinus related because around the same time that the headache went away, the snot started. And the drip down my throat which makes me feel like I'm choking when I lay down. I slept for three hours yesterday afternoon and I never nap during the day. I slept long enough that the kitties were doing a welfare check, trying to pry my eyes open. I went to bed early last night and although I didn't sleep as well as Saturday night, I woke up feeling better than I have in days.

They're predicting wet and icy weather for us over the next two days and since I avoid crowds at all costs, I figured I should make a big grocery run before the bread and milk crowd/holiday cooking crowd hit the store. I have been so sketched out about budgeting and slightly uncomfortable that Austin gave away some of our food money last weekend... but then I realized I still had half of my food stamps from last month. I guess I just didn't shop as much as I thought I had. It all works out. I don't know why it still surprises me when it does. So our pantry is packed and we should survive what I believe will just be a cold rain for the next two days. 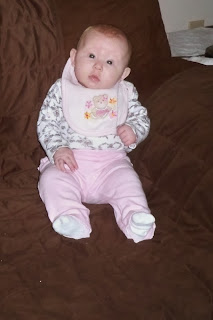 Austin's girlfriend Charity and her baby girl Mya came over this morning. Mya is three months old. She was born right before Austin and Charity started dating. There's a sad story about her father but it's not my story to tell so I won't. Charity's a good mom and Austin is doing a good job of being supportive of her. Her mother invited Austin over for Thanksgiving which is a sort of big deal - her parents weren't thrilled with her dating anyone while Mya is so young, afraid that it would be a distraction for her. I think the fact that Austin isn't terribly clingy has helped. He's not really demanding of her time because he's perfectly content to do his own thing a lot of the time. He and I are similar in that respect. Charity has a strong personality and is highly motivated. I think she's good for Austin... even if Mya can't quite figure out who he is. 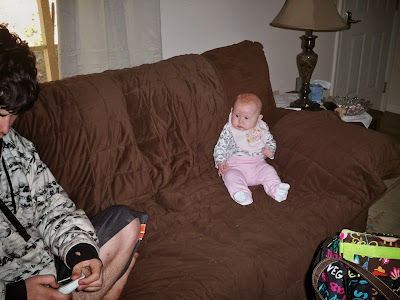 Love this picture of her watching him on his phone. She always gives him this curious look. She looks so tiny there on the couch, doesn't she? I don't know how long these crazy kids will stay together. Like I said, they dated before and it didn't work out. My boys make great boyfriends because they were raised by a girl who surrounded herself with lots of colorful characters. My kids were getting mani-pedis before they could drive. They went shopping with me for the theatre. They tagged along to everything I did... and vice versa. I always raised my boys to be good caretakers of their little cousins. To this day Sarabeth and Jamie adore spending time with Austin. He's good with little kids because he's really just a big kid. 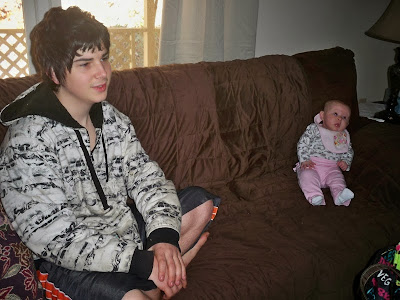 I've got a couple of genealogy posts that I'm working on... and I'll be sure to post lots of pictures of wintry weather, should we get any. Happy Thanksgiving week, y'all! Love and hugs!