Tuesday By The Fire 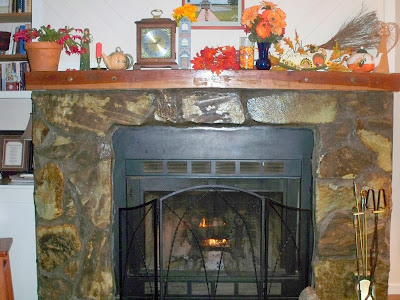 As I suspected... our "possible wintry mix" was just a lot of really cold rain. It's ok. We've still got December, January and February to turn my world into a snow globe. I took advantage of the dreary weather and made potato soup. Austin made a fire in the fireplace. You would think the "in the fireplace" would be understood but this is Austin... the kid who burned a dozen holes in the carpet. Have I told you that story?

When we were living in the trailer aka as "the Cardboard Castle" one day after school when his older brothers were *cough*notreally*cough* watching him, he figured out that if you wadded up a piece of notebook paper and lit it on fire, it would rise a little bit, like a hot air balloon. And then it would fall to the carpet and catch the cheap trailer carpet on fire. WHICH he smothered with a pot so the fire burned a pot sized spot on the carpet. Most kids would do this once, freak out and stop. Austin burned a dozen places on the carpet before either his brothers stopped him or I got home from work. I forget which came first. I had a dozen black polka dots on my green carpet. It was lovely. And unfortunately not the only Austin the Arsonist story.

This is why, when he called to tell me our house got struck by lightning, when he said, "our house is on fire" I said, "what did you DO?". You can't blame me.

Anyways... I had a brainstorm this morning about the remaining Christmas gifts left to buy and I was able to finish my shopping from my cozy spot by the fire. I got something really fun and unique that cost a fraction of what it looks like it cost. Yay me! I'm not cheap, I'm poor. There's nobody in my life who doesn't have everything they need or want, with the exception of Austin who only asked for one thing (a hookah because OF COURSE I want to help Austin play with fire). In my mind gifts come in one of two categories - either you make someone's wish come true  - like a Lexus with a bow on it - or you give them something meaningful and creative. I'm in no position to be granting wishes so meaningful and creative it is!

I hate to tease a great, affordable gift idea and not share it with you but 99.9% of the people who are getting this particular gift read my blog at least occasionally and I don't want to spoil it for them. So if you're looking for a gift idea and need to know now, instead of after Christmas when I will be able to tell you... then email me and I'll share. I only mention it because it took up a big chunk of my day and I have never been finished with my Christmas shopping before Thanksgiving! It makes me feel like December is a great big month of possibility instead of facing it with a "how will I ever manage?" panic that is my usual holiday state of mind.

That means I might actually do something the with Christmas cards that have been sitting on my kitchen counter for three weeks. On top of those cards is a little note with my friend Whitney's address... the address I jotted down in February when I was ready to mail her baby (who was then in utero) a baby gift. Baby girl is nine months old, almost, and I am a big ole procrastinator. So you see, finishing Christmas shopping early is a big, hairy deal for me!

The potato soup I made this morning was super easy and so good. I read on another blog :waves to Sonya: about her making potato soup and I thought, "I can do that!" and so I did. I just chopped an onion and two celery stalks... sauteed them in a stick of butter... once they were translucent I added carrots and potatoes and a box of chicken broth. I added about two cups of water to make sure that was all covered up and just let it boil away until the potatoes were tender. Then (this is the only tricky part) I took out a ladle full of broth and mixed in some flour... returned that sludge to the pot so that the broth would thicken... added some half and half and let it all warm up and... all done! I seasoned with a little garlic powder and rosemary and Austin said he would have liked to have Parmesan cheese with it but I thought it was perfect. I had bought a baguette of french bread yesterday and it was nice and crunchy/chewy today, perfect for dipping up broth. I had soup for lunch and dinner and there's still a lot of it leftover.

There's also meatloaf and mashed potatoes leftover from last night and sloppy joes leftover from last Thursday. And a turkey breast waiting to be cooked. We're not going hungry by any means. And... this sounds like a really bad "fat girl" habit but I have a box of Little Debbie's in my nightstand. The thing is... I get a sweet craving every night about an hour after I take my meds and I don't want to have to climb the stairs to get a snack. Also. This way I can sorta keep Austin out of them. Although lately his addiction is clementines. We keep a box in the future kitchen area of my Whine Cellar and he can snack on them whenever. Austin's munchies have always been whatever is easiest to grab so if I put out something nutritious, that's what he eats. It's not that easy for me. If I want something sweet I will eat my way through everything in the house until I satisfy that sweet tooth. I LIKE hummus and carrots, I LOVE pomegranates and I try to keep both on hand for me to snack on but at night... Debbie's my home-girl.

Anyhoo... so that was Tuesday. Hope your week is going well. If you're traveling, be safe. I'm happy to be staying put by the fire with my kitties! Love and hugs y'all!