Maybe I'm overselling it but WHAT a Wednesday! seemed like an enthusiastic title.

My fabulous online gift purchase from yesterday was delivered this afternoon. Seriously! I got free shipping and it was delivered the next day! Talk about holiday cheer! As a bonus, something I wanted to go with this gift but didn't think I could afford is available at Ikea for an amount I CAN afford. The closest Ikea is in Atlanta and nowayinhell would I go there between Thanksgiving and Christmas. Never. I've been there twice before - the first time was the day after Christmas with my buddy Joey and the traffic was insane. The second time was with the second husband and it was a nightmare for so. many. reasons. which I have blocked out to protect my sanity. As a matter of fact, I went with the second husband at least twice so I really have blocked things out. Anyways. I thought there *might* be a chance that Cody would be working near there as his job takes him all over the state and it turns out that he IS working near there soon so my fabulous online gift purchase may be even more fabulous. I'm excited about all the gifts I've bought for this Christmas. Having lots of available time to browse all year long really lends itself to better gifting - even on a tight budget! 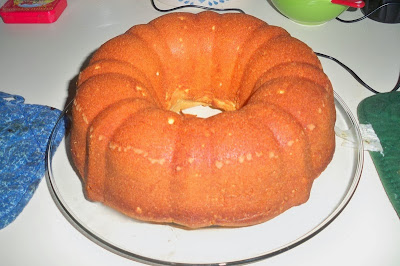 So that was happy. I woke up with the demon abdominal pain again but it eased up without drugs and that was also happy. I got semi-motivated this afternoon and decided to make another pound cake, my second attempt. I couldn't relocate the recipe I used last time so I just made it from memory and held my breath and it turned out even better than last time. Makes me feel like a real Southern Belle. Southern women are supposed to be able to bake from scratch and grow things in the dirt. I'm one for two. I was going to make a lemon poppyseed pound cake because Austin loved the lemon poppyseed cookies they used to sell at the bakery in Cleveland. Then he told me he probably wouldn't want it even if it was lemon poppyseed because he isn't in the mood for cake so I used the same flavors that I did last time - eggnog, nutmeg and rum flavoring. There's a slice sitting on the nightstand beside me (for my sweet craving later) and it's making the whole room smell good.

Despite my wish for a pre-Thanksgiving Winter wonderland, it never snowed here yesterday or today. There was some alleged flurry activity last night but it was too dark to really distinguish if they were in fact, snowflakes. It is unseasonably cold. 28 degrees at the moment according to our little handy dandy thermometer. It's cooler in the basement than the main floor which is usually alright by me but tonight it's cooler than my comfort level. Austin is using a space heater in his room because he usually only wears boxers and no shirt. Actually, the space heater was because the baby was in there the other day and he decided he liked it toasty warm which meant that his "risk management obsessed" mother had to do a complete inspection to make sure there was nothing flammable near the heater. My room, on the other hand, has windows that aren't insulated well and stays fairly cool. I have an electric blanket AND an electric throw so when it's cold like this I become the filling of an electric sandwich and I wake up sweating. I hate to breathe warm air so it's really better for me this way. I could always turn up the heat but... it hardly seems worth it. 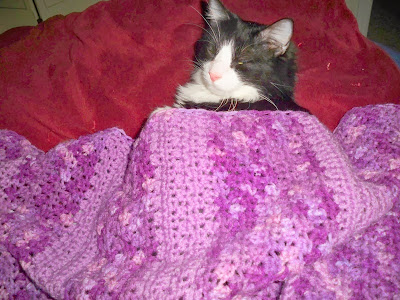 In this picture Little Kitty is demonstrating his method of sleeping on top of the electric throw which is on top of me and under the afghan that mom made which is on top of the electric throw. I did not cover him up - he slithered down between the blankets and used his super dexterous front paws to adjust it. Since I sleep on a big feather cushion, the foot end rises slightly, almost like a little pillow for him. I always wake up with at least one kitty at the foot of the bed.  One of the three cats (I'm pretty sure it was Stubby) threw up right in the middle of my coziest blanket which is usually between the electric throw and the afghan so we were one blanket short last night. I did laundry today so there's now that extra level of warmth and it smells SO fresh and clean!

Much like my multi-layered bed, my outfit for today is a bit of a multi-layered look. I randomly kept adding and subtracting layers as the day went on. I started with leggings, a long turtleneck and a button up shirt then added fuzzy green socks that didn't match because my feet were cold and these were the only fuzzy socks that weren't in the wash. Then I decided that the leggings were too snug to not have something that extended further down (not that anyone notices or cares - at this point it was just me, the cats and the kid in boxers but you never know - a neighbor came by one day last week and the UPS man came today - visitors are unlikely but possible) but I was also a little chilly so I put on a long skirt over the leggings. Then, before I came downstairs for the night I took off the turtleneck (because who can sleep in a turtleneck?) and button up shirt, put on a long sleeve tshirt, took off the long skirt and covered it all with a sundress that is tshirt material - very soft. Still with the leggings and green socks. Just picture a toddler dressing themselves for the first time.

Tomorrow the fam is going down to my cousin Christie's house in Turin, Georgia (right near the fictional town of Woodbury). It's too much of a drive for me to do in one day and I can't leave all three cats overnight because Eddie eats all the food and the other two cats would starve. Also, it's just too much driving with the added excitement of the evil gut pain in addition to something fun that's happening with my right knee. I'm going to fix a turkey breast and stuffing... sweet potatoes and maybe some corn for myself. I forgot to buy cranberry sauce so I may run out in the morning and get some if our local grocery store is open. Austin is going to the girlfriend's house so it will be quiet here. In other words, just like any random Thursday but with the added bonus of the Macy's Parade on tv! I hope that wherever you are, whatever you're doing, that it's a blessed "random Thursday" for you as well.