Kicking Debbie To The Curb

Yesterday while I was at the doctor the nurse called me back and asked me to get on the scale. I joked, "you know... you're supposed to take my blood pressure first before you get my weight, otherwise the number on the scale makes the blood pressure go up..." She laughed. All 88 pounds soaking wet of her. The number wasn't a huge surprise and I didn't *really* get stressed out by it. I don't LIKE it but in the grand scheme of things being overweight/obese/freak show fat is just a small part of the problem.

The really weird thing is that I like good food. Not greasy food. Not fattening food. I much prefer clean eating. Given the choice I'd much rather have a bunch of grapes or some sliced radish than a Little Debbie any day. The problem is that Little Debbie is just so gosh darn shelf stable and available. She's easy. She doesn't require a trip to the store every couple of days or a trip upstairs to the fridge. It's ironic,  isn't it, that eating food that doesn't ever deteriorate advances the deterioration of our health?

I'm not in the position to get back on the Weight Watchers bandwagon. I'm taking some meds that are contrary to weight loss and there's just no way to justify an expensive program in which I can't really succeed. I can't exercise, other than maybe swimming or walking really, really slowly for very short distances. Even though there's a lake right outside my door, I don't trust what lies beneath the surface. I'm not big on swimming with snakes and frogs and fish and... who knows what else. I stretch a little here and there but I pay a huge price for it. Seriously I'm handicapped in what I can do toward hard core weight loss but I CAN make better choices without suffering.

So I've broken up with Little Debbie. I'm giving up my juice addiction and filling my big sippie cup with ice water instead. I'm investing in some foods that aren't shelf stable and trying not to eat foods with words I can't pronounce. I'm not weighing in but I'll be able to tell if stuff fits better. At the end of the day the number on the scale doesn't matter as much as how I feel. I can't fix my back but I can reduce the demands I'm making on it. I'm significantly heavier than I was when my back first started giving me trouble. That just doesn't make sense. Something doesn't work right so you ask it to do more.

For dinner tonight Austin made macaroni and cheese steak. He mixed in steakums with regular boxed macaroni and cheese. It tastes better than you might think. I tossed in some freshly picked spinach from the garden for a little green something-something. If I could get my recommended servings of fruits and veggies in every day I wouldn't have as much room for the bad stuff. I'd have no trouble kicking Debbie to the curb. Lunch today was salad with spring greens with fixins from the salad bar at Ingles. Snack time was pita crisps with carrots and hummus. Breakfast was a solitary fig newton. I know. Not a great breakfast. Mom and I had some errands to run in town so I just ate enough to give the pills a place to land without eating a hole through my stomach. 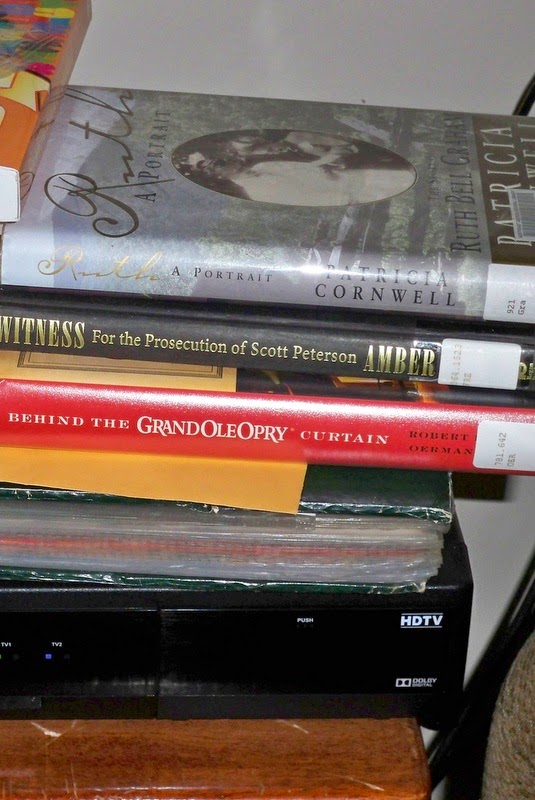 I went to the library today and picked up three new books: one about Ruth Graham (Billy Graham's wife), one written by the girl who was having an affair with Scott Peterson at the time he murdered his wife and one about backstage at The Grand Ole Opry. I'm still working on Arnold Palmer's autobiography but every time I lay down in bed to read Little Kitty plants his furry butt right smack in the middle of it. Also, there's been a lot of good stuff on tv this week so I haven't read as much as usual. I still read several hours a day and I read ridiculously fast.

There's lots of biological stuff going on outside. I'll wander out there and snap some photos tomorrow. My trusty digi-cam is working again. I don't know how or why but I'll take it. Mom planted a new tree today so there's lots of good stuff to see! There's also a huge box that the tree came in for the kitties to play in. I'm telling you... never a dull moment here!

My favoritest blog mommy ever, Grace of Camp Patton delivered her fourth little bundle of joy this morning. I'm totally smitten (via blog reading) with baby Phoebe Anika and can't wait to watch her grow. Grace has Julia who is 3 1/2, Sebastian who is 2 1/2, Theo who is sixteen months old and newborn Phoebe. That kind of line up provides endless blog hilarity! Oh, and the baby daddy is an Ob/Gyn resident so four kids, frequently on her lonesome makes Grace a funny camper. They're just a sweet, very real family and if you need a giggle, check out her posts about the things that Julia says.

Austin's friend Fat Pat brought his little boy over to visit last weekend. He was such a cutiepatootie, even if he did put up a fuss when we pulled him out of his carseat. Pat's stepfather won $500 on a scratch off ticket two weeks ago. He bought another one with the money and won $1000 which had to be redeemed at Lottery Headquarters. On his way he bought ANOTHER scratch off and won $340,000! These people really have had a hard time financially. They work as painters and handymen and sometimes have a hard time finding work. With the money they won they were able to buy new vehicles and pass down their vehicle to Pat and his baby mama. He was driving an old pick up truck that hardly ran and was a big gas guzzler. They also bought a new double wide for Pat and his baby mama (and her grandma) to live in... Pat spent most of last Summer crashing with us because he didn't have anywhere to live. I'm not a big fan of the lottery because to me it seems like a stupid tax - no offense. It's just that the people who spend a lot of money on it are usually the people who can't least afford to waste it. It's nice to see some good come from it. Bless his little heart! 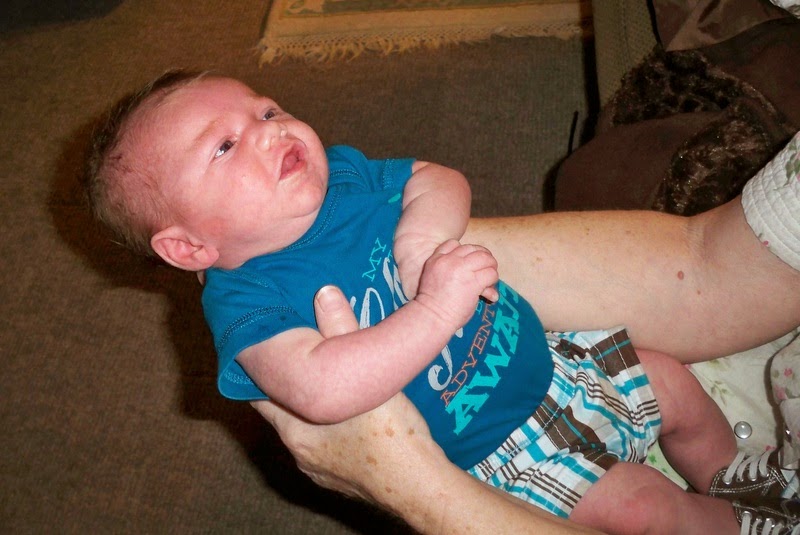 I guess that's about all the news that's fit to share today and some that wasn't. Can't believe we're midweek already and six short days away from the anniversary of my birth! Happy 450th birthday to William Shakespeare and Happy Wednesday to you! Love and hugs, y'all!

I struggled with weight half my life until I read Intuitive Eating. Perhaps your library has it. This book will change your life.

If the library does not have the book you can read about it on dr. Google and YouTube. Josie Spinardi on YouTube is also a fine resource. I have lost 50 pounds and kept them off for 5 years.

Good luck with your clean eating! I have been doing that for almost 250 days and have lost 54 lbs to date! Not bad, slow but doable. :)

I have also been reading about your SSI case that you post. It does take a very long time for approval if to get one. but I really wanted to tell you about my daughter who is an ASPIE. She was diagnosed late in her life. We knew there was always something "wrong" but no one believed me. So we fought until one day a lovely doctor said, "clearly she has Aspergers!" YES Indeed! She also said that she should never drive because of many reasons. She does work part time because we believe she should contribute to the world of "earning" her keep. She is going to be 25 btw. The doctor also said that we should apply for SSI for her because she would most likely be living with us for a very long , long time and even maybe her life. So, after 3 almost 4 yrs she was approved. Its not a lot but its something to help with the bills, her clothing and shoes...and our housing... it can be done!
Good luck to you! I hope it all works out that you or he gets the help.