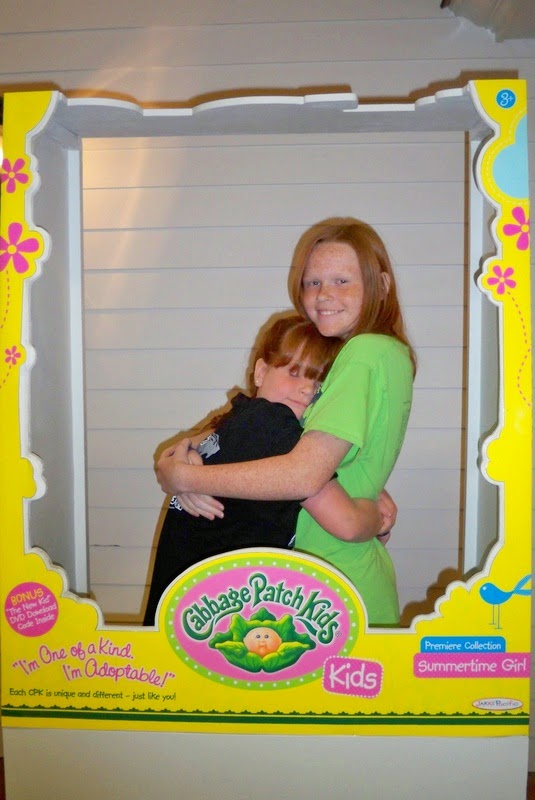 I have about two dozen blog posts swirling in my head but none of them seem to be making it to the keyboard. Some are too deep, too controversial, too sad... and some are pictures of cats and cute kids. I really feel like I could jump off either side of the bridge any moment: life is pure bliss or life is a hopeless mess. I could be easily nudged in either direction by the smallest of events.

My kid is going through such a rough time. You are only as happy as your saddest child. I look at the accomplishments of the other two and am so relieved that they are safe and happy and loved but that can't undo the heartache that I feel for the one lost lamb. His whole life has been a struggle for people to understand and accept him. To those who show him grace I feel infinite gratitude. To those who treat him with indifference... I understand and accept because I know he's hard to deal with but I still hurt for him. I don't think there's a day lately that I don't shed a tear for him. He's the child who has the least amount of contact with his father - his entire life has been about rejection from him. He's a pariah in our family for something that may (or may not) have happened when he was very young so he carries that burden. The Darby years were traumatic for him for several reasons and honestly, for every person who showed him any kindness there are a dozen who treated him like an outcast. Years of those kind of events and this recent breakup have left him really discouraged and just... lost. The people who are hardest to love are truly the ones who need it most.

He was dating a local girl that he had dated in high school. They got together last Summer just a few weeks after she had a baby. She told him that the baby was a product of date rape and ALTHOUGH the story always seemed sort of suspicious to me, I never challenged it because what if it HAD been true and something like that had happened and no one believed her. I'm such a huge proponent of choosing life, no matter what the circumstances that I wanted to support her decision to have her baby. As it turns out the baby was conceived with a boy who was going into the military and the story was concocted to keep him out of trouble. She got bored since he was away and basically just used my kid for amusement lying to him about her situation for the past nine months. Honestly, I'm glad that she's out of his life because the last thing he needs is to be with someone so dishonest and manipulative but he's hurt that he was made a fool for so long. It sure doesn't help him be able to trust in the future. 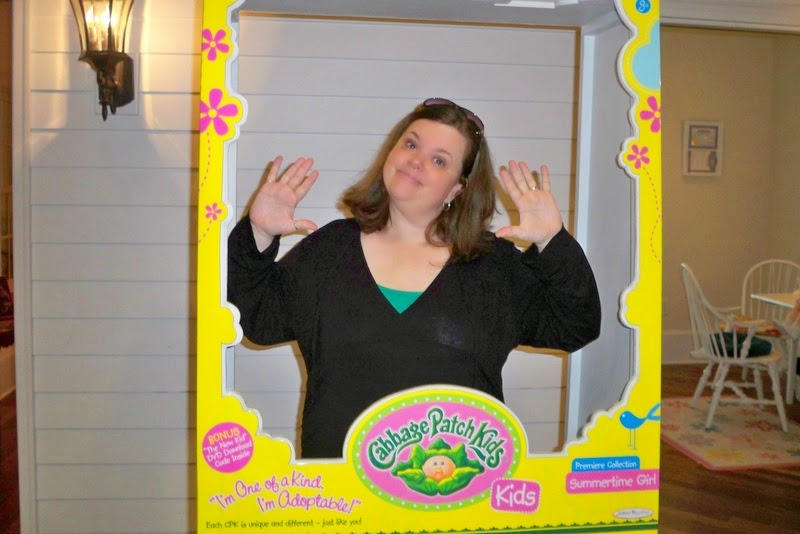 Otherwise... I had a great day with my nieces yesterday. We went to Babyland General and then to the peanut stand for boiled peanuts. It was a hot day and I did a lot more walking than I'm used to so by the time I got home with them I was really feeling awful. I don't know if it's the meds or the pain but I was so sick to my stomach that I just knew I was going to have to pull over and throw up on the way home. The road that leads to our house is so curvy and those curves were killing me! I knew that if I got sick it would freak the girls out - I had the air on full blast and was breathing deeply trying to keep it together. We got home and settled into my very cool Whine Cellar and we all just sort of melted. When my mom popped down for something Sarabeth said, "Mawmaw.... Jamie needs something for lunch... and so do I..." and that's the last thing I heard out of her for a long while. She woke up long enough to eat and then crashed for the afternoon. 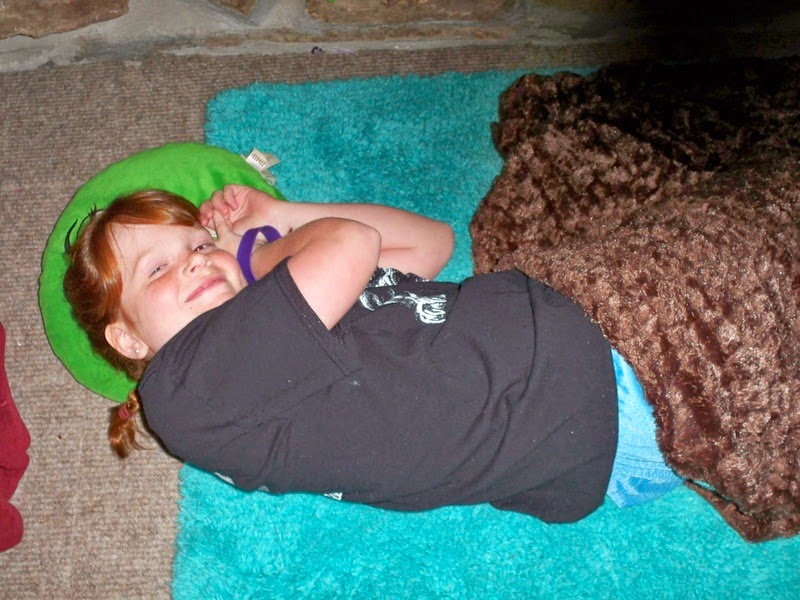 Jamie built her little nest on my blue rug with her special pillows and blankets that I keep tucked away in a cabinet in a trash bag so that they don't accumulate cat fur (she's allergic). Mawmaw set up a laptop for her and we watched a few episodes of My Little Pony. Sarabeth had booster shots the other day for middle school and I think that's what wiped her out. Whatever the cause... I'm your go-to-guy if you need a lazy afternoon. After awhile Jamie and I went outside to sit in the porch swing and then picked blackberries. 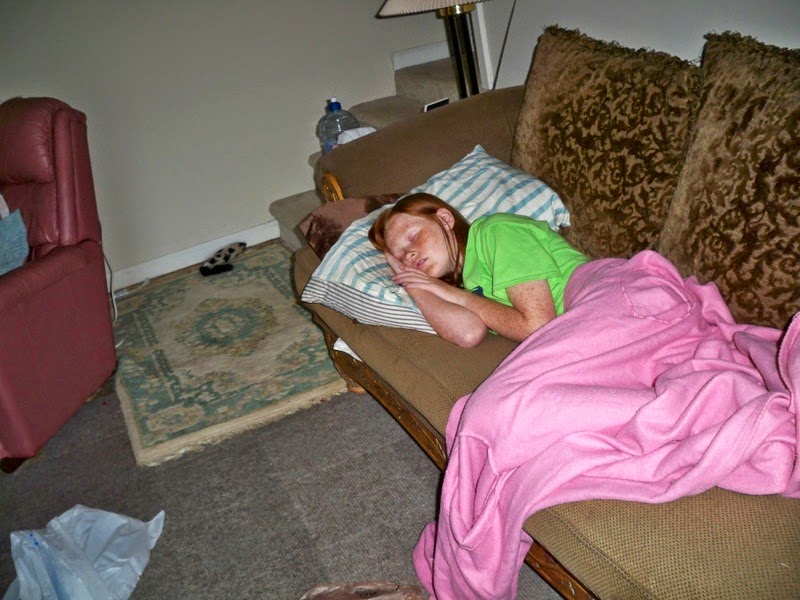 I'm not getting enough sleep at night because Little Kitty has become so needy and demanding that he wakes me up several times a night to PET HIM. I used to be able to tuck my arms in the blankets and he would think that the hands were gone so petting time was over. Lately he's been starting at my shoulder and tracing his paw down my arms until he finds my hands and then he'll use whatever means necessary to get that petting machine turned back on - nipping at me with his teeth, tapping me with claws, whatever it takes. I could just close him out at night but I'd miss his demanding little self. Austin's been sleeping better at night and I think Little Kitty is missing playtime with Austin. It doesn't matter how late I fall asleep or how little sleep I get, I'm wide awake by 8am at the latest and have a hard time getting a decent nap. This morning Pop had to wake me up to find the keys to one of his cars. I had driven it yesterday with the girls and was so sick when I got home that I dropped the keys in my purse instead of hanging them up. That particular car is the one with his golf clubs in the trunk and he was going to play golf so... after that I made an early morning (before it got too hot) trip to the store to buy more luigi's italian ice. 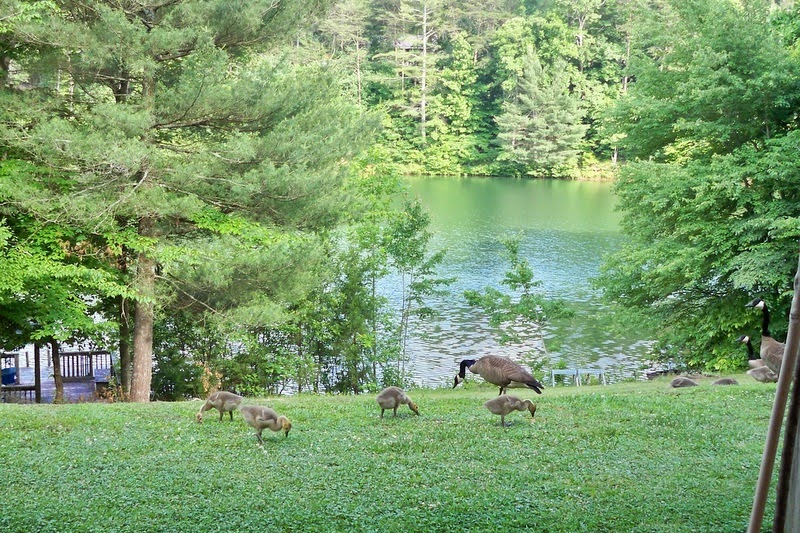 In other news... the geese around here have gotten really aggressive and come all the way up to the back porch. The yard is covered in goose poop and feathers. I guess that will translate into a really green lawn at some point. Pictures of geese replacing pictures of cats today.

You're all caught up for the weekend now! Love and hugs, y'all! 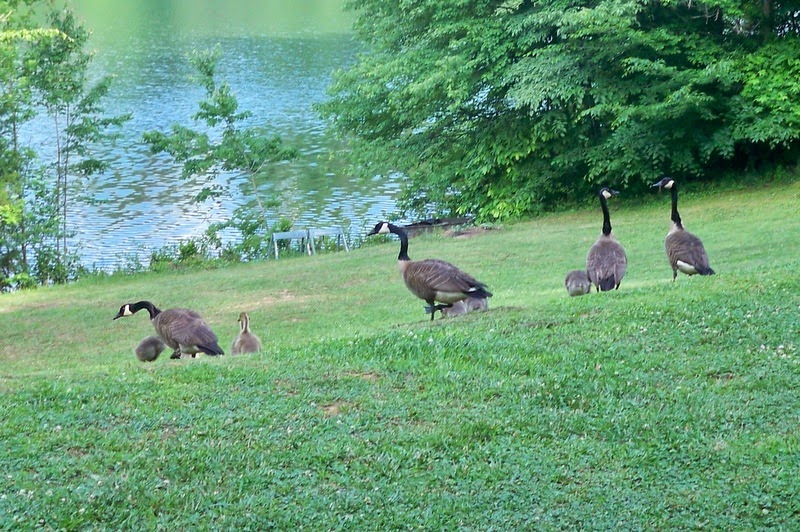 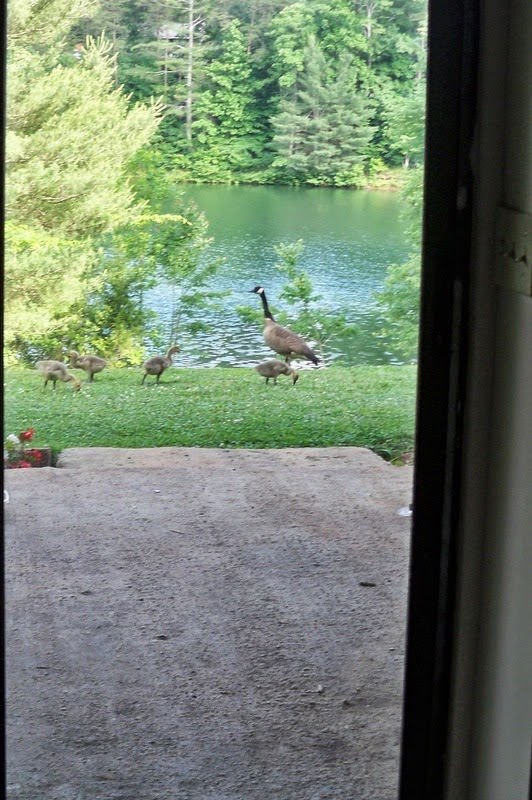 Picture taken through the sliding glass door... that's how close they are. The novelty of having geese nearby has truly worn off!