Hey y'all! Time to play the "sorry I haven't blogged all week" song again. I don't know that I have anything ground breaking to share but I knew it was time for a welfare check with my mother hens and blogger babes.

After the fall on Sunday I was uber sore and moving around even less than usual. I just planted my happy butt on the loveseat and stitched to my heart's content. Here's the progress of my latest project after one week: 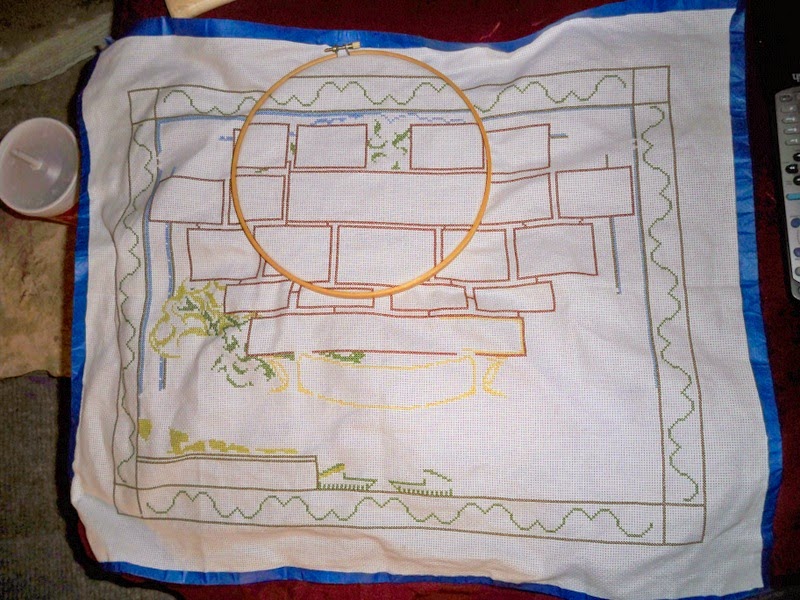 Today is two weeks and I have added a bunch more on it. It's a big piece but that means there are big chunks of fabric that are all the same color so it's easy to just chug right along without having to continually glance back and forth with my pattern. I am stitching more than I'm surfing and it has been a nice retreat. 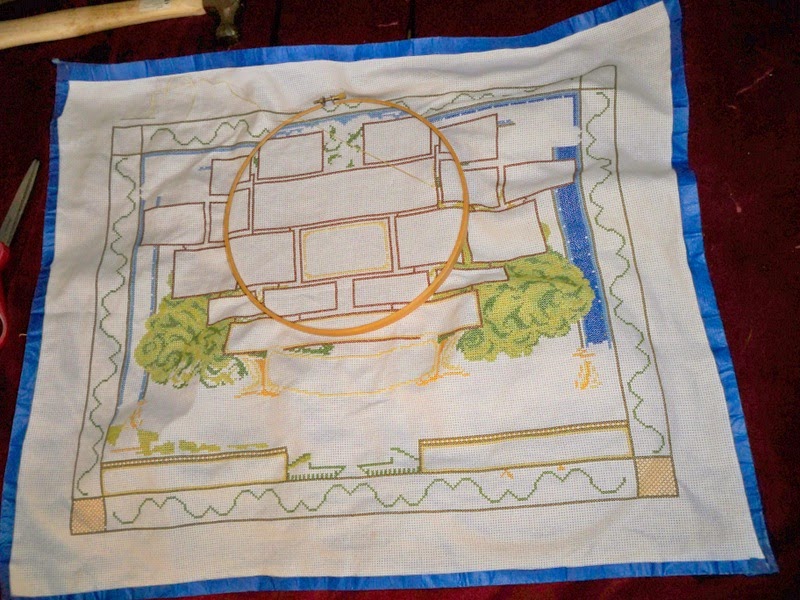 This is at the end of week two. Doing the trees is hard because there are three colors in random patterns. There are also a lot of spots where you just have a stitch here and there of one color. It looks like I'm not doing things in a specific order but what I do is use one strand of thread at a time - like, the thread comes in a long piece that you end up cutting in half and then dividing the six strands into three sections (you use two strands at a time). That makes six sections of any one color at a time. If I'm not sick of that color I'll do another six but most of the time I switch to another color. (This may have been the most boring paragraph I've ever written).

I'm debating leaving Farmville2 because as I've progressed in the game it has become a huge timesuck and most of the time I'm playing it out of obligation not because I'm enjoying it. I'd rather devote more time to things that matter like my genealogy stuff and bible study and - I don't know. It has just started to feel like a job not a hobby. Whereas I can't WAIT to start stitching in the morning and I hate it at night when I'm tired and start making mistakes and have to quit.

Austin was with us a couple of nights this week. Two, maybe. He came and did some yard work and was semi-helpful around the house and then he headed back to his girlfriend's house.

I took some funny pictures of Little Trouble Kitty being all stealth in a clothes basket that my mom had put on the landing of the basement stairs. Every night around 7:30 we gather all the kitties in the basement and have "nummy time" where they get their treats and close the door heading into the house. The reason for this is to keep Lily (who is still hanging in there despite her cancer diagnosis over a year ago) from coming downstairs. She can't go UP stairs so someone has to walk her around the house up the hill when she escapes. During the day we keep a baby gate at the top of the stairs, sort of propped against the doorway so there is enough room for the cats to get through. Lily has lost so much weight that she can slip through herself but the gate does discourage her slightly. However, at night if she comes down it's really hard to guide her up the hill because she doesn't see well and when it's dark outside, it's really dark (no street lights). Anyways... one night Little Kitty was on some kind of secret mission to watch and see if the door opened up again. He kept peeking out at me then peeking up the stairs to look at the door. And I guess he thought since Mawmaw carries the basket up the stairs that she might carry him. 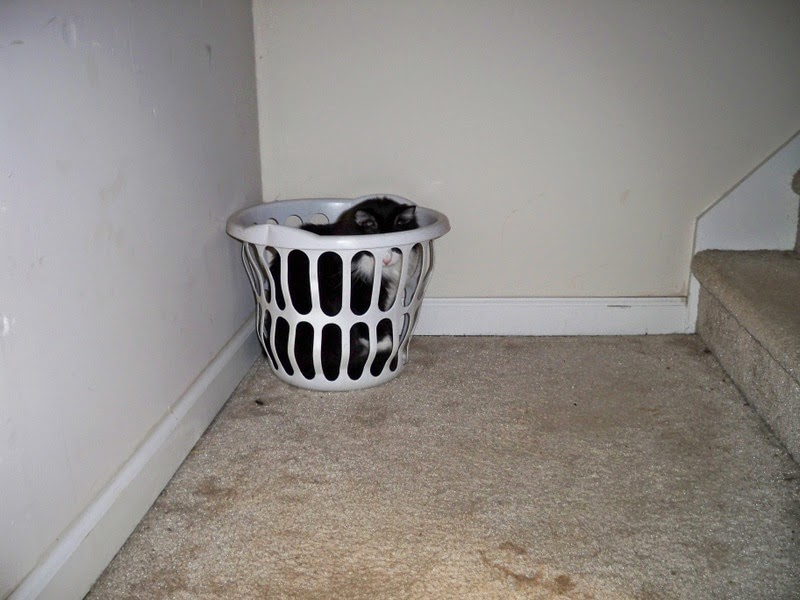 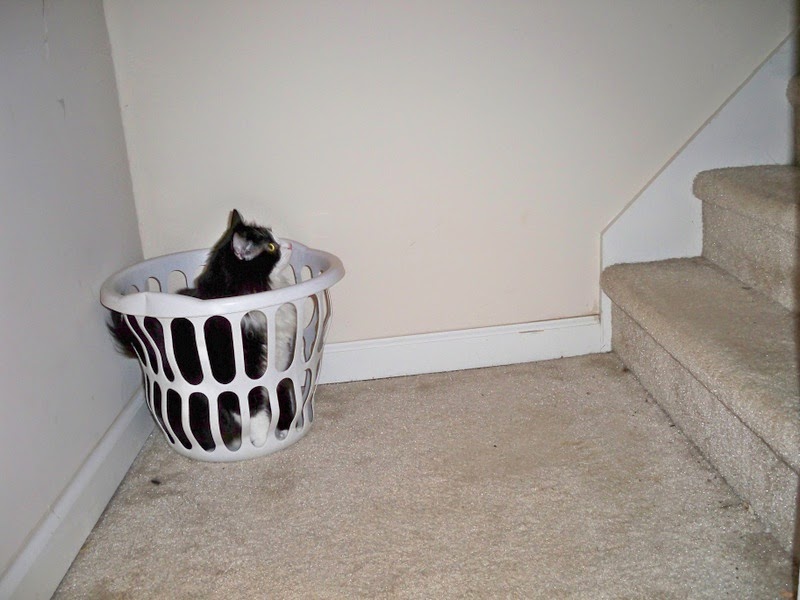 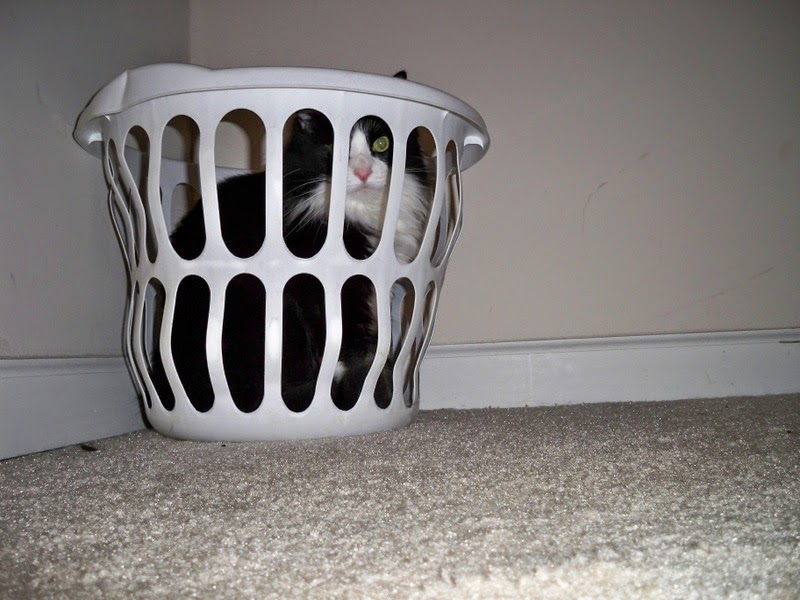 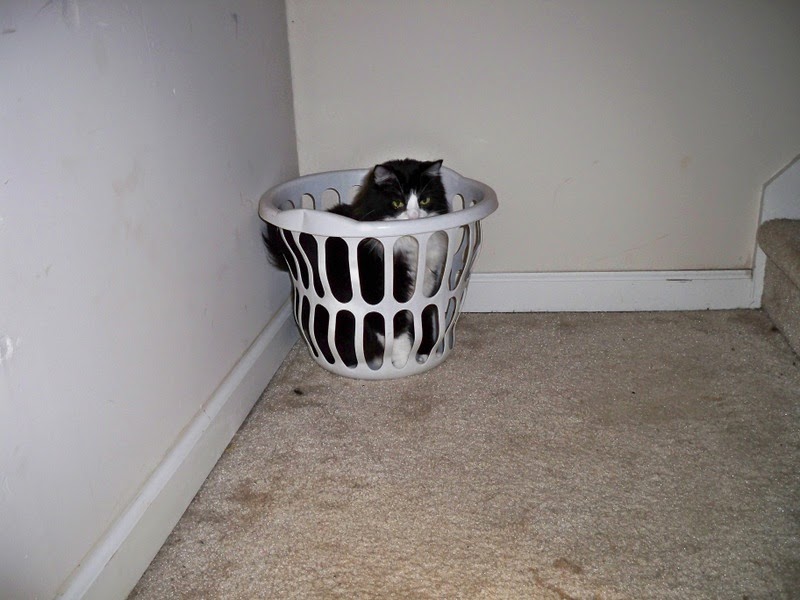 Stubby got sick the other night and threw up ALL OVER the mattress on the floor by the hearth. I used to be a champ at cleaning up disgusting bodily fluids but for some reason since my kids are grown I can't stomach it. I was heaving like crazy. I'd dab up a bit of it and then have to run for the bathroom. Keep in mind that I was moving slower than normal because of my fall and so that whole process of bending over and then running away was no picnic in the park.

Another night Oscar the dachshund got upset because my parents went out in the boat WITHOUT him. He is constantly with one or the other of my parents and he loves the lake and loves riding in the boat. He was climbing in my lap for comfort and then tried to climb OVER me to the table behind the loveseat. That table is  literally just propped up - one of the legs is broken and you can't put any weight on it without it collapsing. So I was reaching back over my head trying to pull 16 pounds of chubby dachshund back to my lap. I finally hollered for Austin and he came and intervened in the doggie meltdown.

I can literally do nothing all day and still - just by chance and happenstance - end up doing things that aggravate the fragile state of my spine. I try to be as careful as I can but life happens.

On Wednesday this week I took my mom to the doctor while dad was down in Atlanta taking care of Grandma's errands with her. It was uncomfortable but not excruciating. Then we went shopping at Dollar General because I was out of shampoo and conditioner and a few other necessities. Dollar General is preferable to Walmart because it is so much smaller and involves less walking but we still manage to find all kinds of fun things there.

Yesterday while Pop was golfing my mom decided we needed to treat ourselves to going out for lunch. Driving thru for lunch,  I should say because I hate sitting on hard surfaces and we took Oscar with us so he wouldn't be scared at home by himself. We got Chick-fil-a and the nice girl in the drive-thru gave Oscar a dog biscuit. He was like, "Chickfila is now officially my favorite place in the whole world!". And it kept him from sticking his snout into our food.

We have a baby pumpkin growing on a vine right beside my porch. 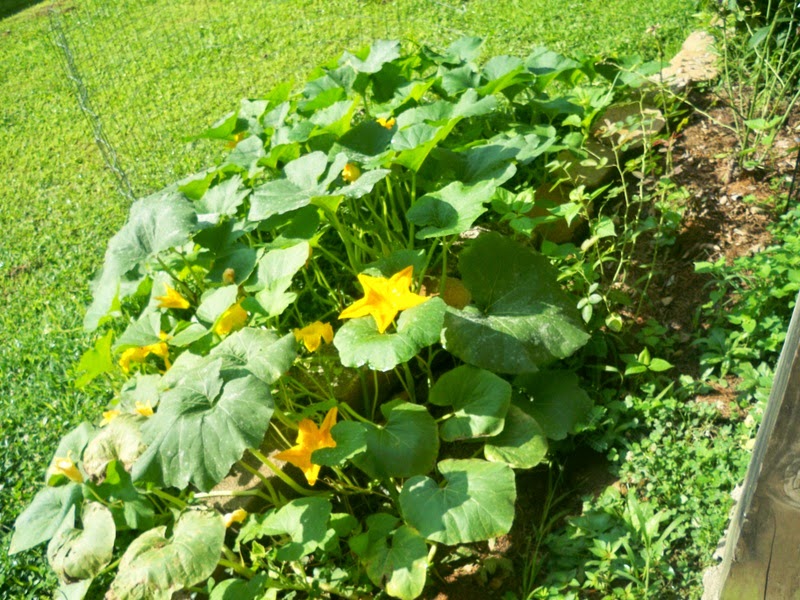 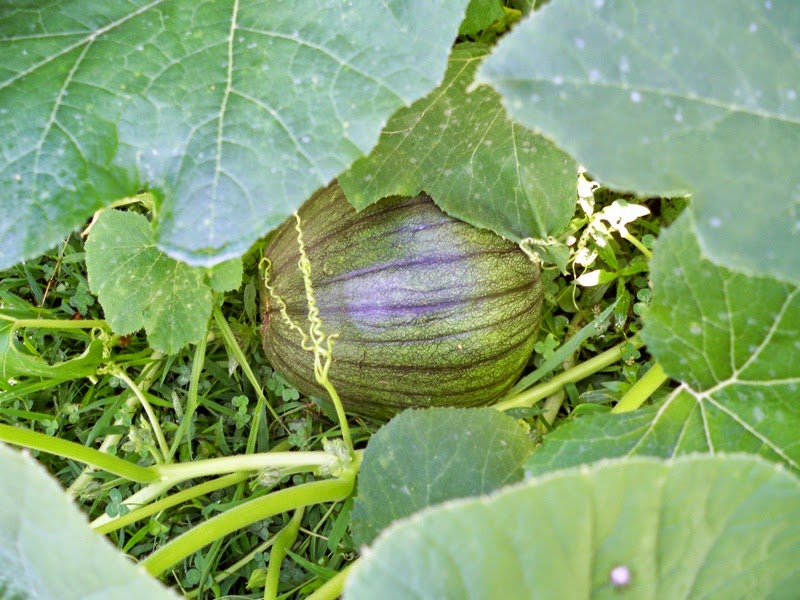 And that's life in Cedar Holler this week. Hope your week have been lovely! Love and hugs, y'all!