I'm watching PBS - a docu-drama about Pompeii that oddly stars the guy who plays Carson on Downton Abbey as this important Roman figure. It's a step up or down, depending on your perspective from the three hours of Bachelorette finale I watched last night. Let's just say I'm diverse.

I have a few things to share (for once) so this will not be a blog entry about the adorable antics of my cats (although they are still as cute as ever). 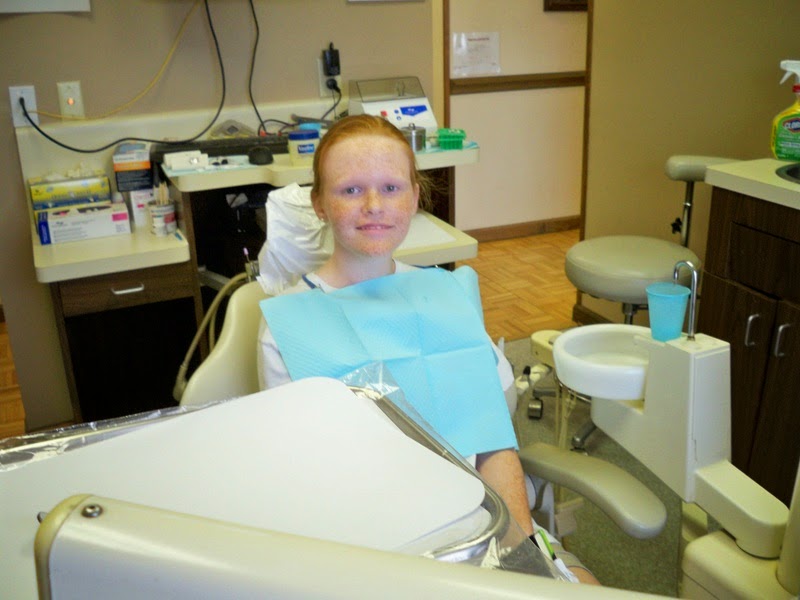 Yesterday my niece Sarabeth needed to see the dentist about an odd protuberance in her gum. It was essentially where a baby tooth had broken off and the gum had grown through it. She needed to see the dentist but dad was in New Orleans working on his doctorate and mom was working in Atlanta. They asked if I could take her and of course, I'm not doing anything else, so why not? Also, Sarabeth and I have always had a really frank relationship. If something is going to hurt, I'm going to tell it will hurt. She trusts me. And I always - even when she was just a toddler - I have always spoken to her like she is an intelligent human being, because she is. Who better to take her than someone she can trust?

She had a lot of anxiety about the whole tooth thing but I told her honestly what can happen if you have something wrong and don't fix it - using the example of Pop's abscessed tooth from a few weeks ago. So when the dentist (who was amazing) gave Sarabeth the option of having it pulled yesterday or having it pulled later, Sarabeth made the mature decision to go ahead and take care of it. She was incredibly brave. She had one tearful moment of anxiety but her sister was playing court jester to entertain her and I just reassured her that it was not going to be that bad. I also gave her chapstick because the worst part of having extensive dental work is feeling like your lips are pulling apart. The ladies at the dental office teased me about being the worst aunt ever but Sarabeth and I agreed that we make a good dental visiting team.

Before the dentist we went by the library to pick up some books they had on hold for Sarabeth. While we were there Jamie started having a bad allergy attack to the extent that she was in the library bathroom with a wet paper towel trying to ease her irritated eyes. We needed to go by and pick up benadryl for Jamie before taking Sarabeth to the dentist but it was taking SooooOOOooo long at the library that we were going to be late. The librarian, bless her heart, told me to meet her in the conference room where she kindly offered us some benadryl. She didn't want to do it out in the open, just in case someone objected. This is small town life, y'all. People take care of each other. So the good news is that Jamie was quickly much better and we made it to the dentist on time. The bad news is that she was trippin' on sunshine at the same time her sister was high on gas. The two of them were HI-LAR-IOUS!

And this happened:
Sarabeth: I feel so weird... like I'm spinning.
Aunt Heather: Like you're drunk? Oh wait. You wouldn't know.
Hysterical laughing ensues.

And the short version of the story is that she did fine. It was not painful. She was very brave. I quickly wiped up a tiny drop of blood that dribbled from her chin before she saw it so she wouldn't freak out but really, she had stopped bleeding before we got home (much quicker than myself or Mawmaw usually do) and she felt well enough to have a hamburger for dinner last night.

Today was my doctor appointment. The liver thing is no big deal. Elevated schmelevated, apparently. I have a kidney infection which apparently was bad enough that the doctor couldn't believe I didn't have symptoms. My back hurts all the time, I always pee a lot, I mean, nothing different. We debated antibiotics. They can't do a shot- which is what works best for me - so we're going to do a course of amoxicillin and not be surprised when that doesn't work. After some poking and prodding he thinks the evil gut pain is an ovarian cyst. He couldn't do a full exam so he told me to go to the county health department.

I called the county health department and they don't have funding for pelvic exams for women who are not able to bear children. Do you realize what this means? Our government is more concerned about people being able to be sexually active and use birth control than they are about potentially life saving exams for people who are potentially ill. It is just another insult to add to the multitude on insults that healthcare has become for me. People having sex is more important than my life. I can pay for the exam - $115 - and I will, probably but she then went on to explain how if anything is wrong they can't help me. Yeah. I get it. The flip side is that if I went to a gyn as a new patient without insurance it would be probably double that so I figure I'll go and at least accomplish as much as I can there and go from there. It's just insulting and so very hard to keep fighting. Honestly, I could just keep suffering through the evil gut pain as I've been doing for a year. Except for the fact that my aunt is battling cancer and it just doesn't seem prudent not to do my best to have it checked out.

The doctor I saw today asked me why I had waited so long... I'm like... waited? I pay a pain doctor a huge amount of money every 2-3 months and there was nothing more he could do without doing the whole abdominal work up, i.e. MRI, etc which I couldn't/can't afford. He said, "why would you see a pain doctor for that? they treat chronic pain." NO, jackass, I tried to get the doctor to whom I was spending the last of my life's savings for pain to diagnose a secondary pain issue. I mean, this is the second time I've seen this guy and this is not the first time I've told him about this pain. This was the first time he examined me and felt anything. So. Just frustrating. I'll leave at that. It's hard enough to be in the lowest caste of people as far as healthcare is concerned without having a doctor who KNOWS you don't have insurance or money give you a hard time for not being able to get medical treatment. Anyways. 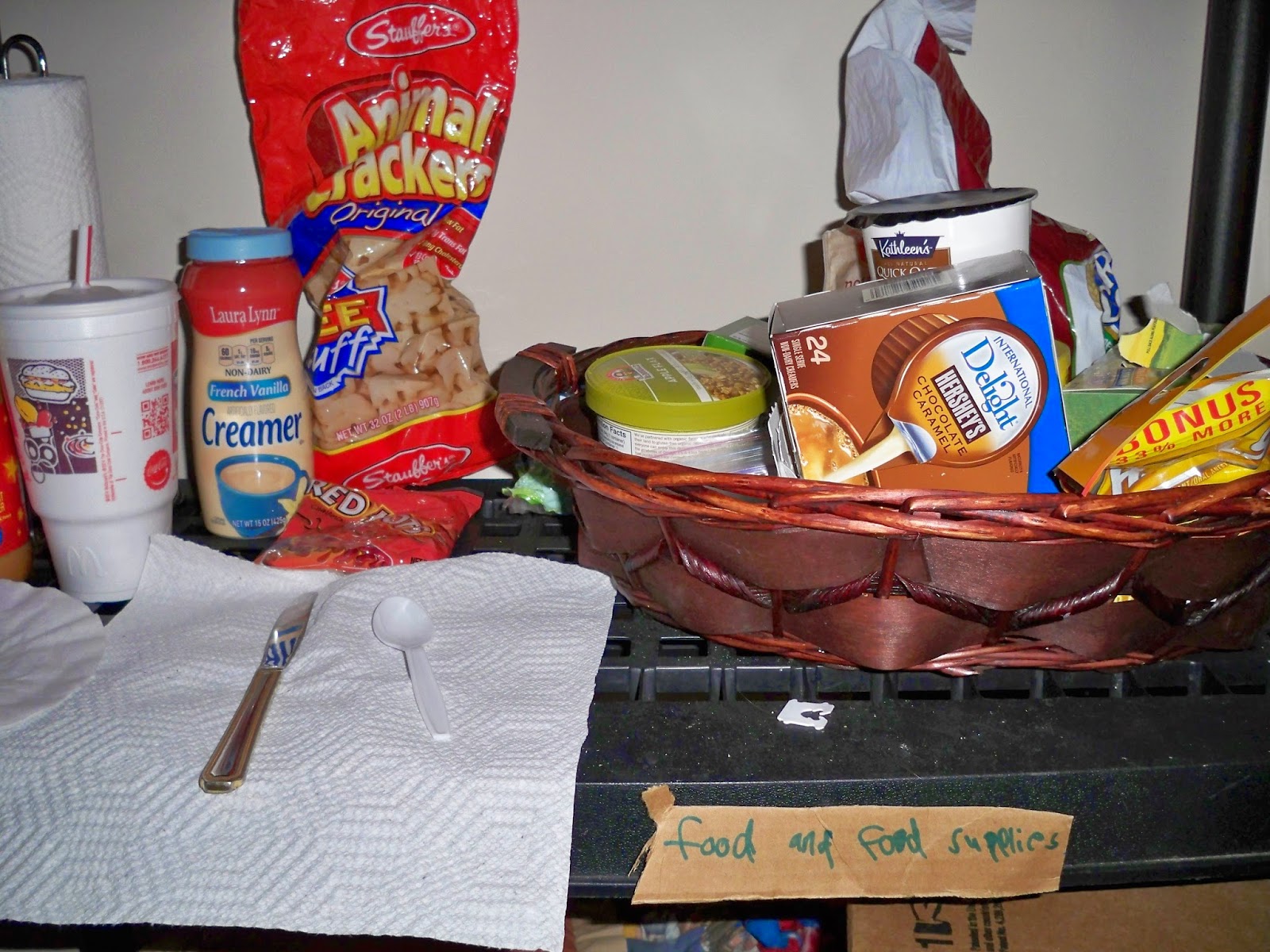 Jamie and Sarabeth had been hanging out with me this afternoon before I had to leave for the doctor and to my surprise, Jamie decided to organize my living room for me while I was gone. Nothing beats the organizational skills of a nine year old! Every time I reach for something I crack up again... like reaching for a tissue and I realize they're not on my end table, they're with the paper towels. Paper products go together. My laptop was in a box marked, "electronics" and she had gathered up things that she thought should go in my bedroom and made a box for them in there - with dirty socks and sunscreen and hair bands. All the different air fresheners and scented candles are together on the end table. Everything I look for means thinking about it through Jamie's perspective and it. is. FUNNY! I mean, she really worked hard at it! Check out my "food and food supplies" above!

Austin is still hanging out with the girlfriend. Haven't seen him in a week.

I quit playing Farmville2 on Friday and have been so relieved not to feel obligated to keep it up. It literally takes about four hours a day and ... I just couldn't. Instead I've been going to Khan Academy's website and listening to lectures on history. That's right up my alley. After I finish their history courses I'm going to check out art history. And I picked up two books from the library in Helen while I was there with the girls yesterday.

Anyways. It's been an action packed past two days and I'm planning to do a lot of nothing tomorrow. I have to pick up my prescriptions and ... that's it. The heat liked to kill me today and oral antibiotics always make me sick so I'll be even more of a hermit until that's done.

Happy Tuesday. The week goes on...
Love and hugs, y'all! 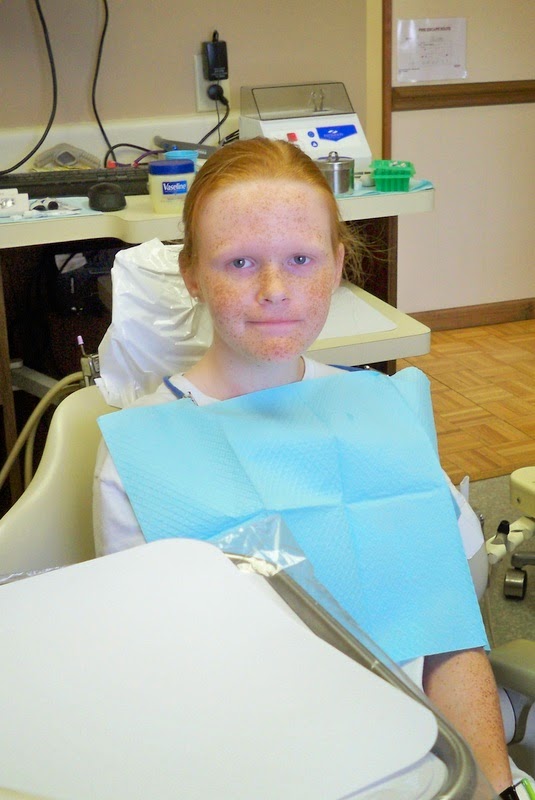 I have pictures of her as a baby making this exact same face. This is her "I'm not giving you a clue what I'm thinking" deadpan. 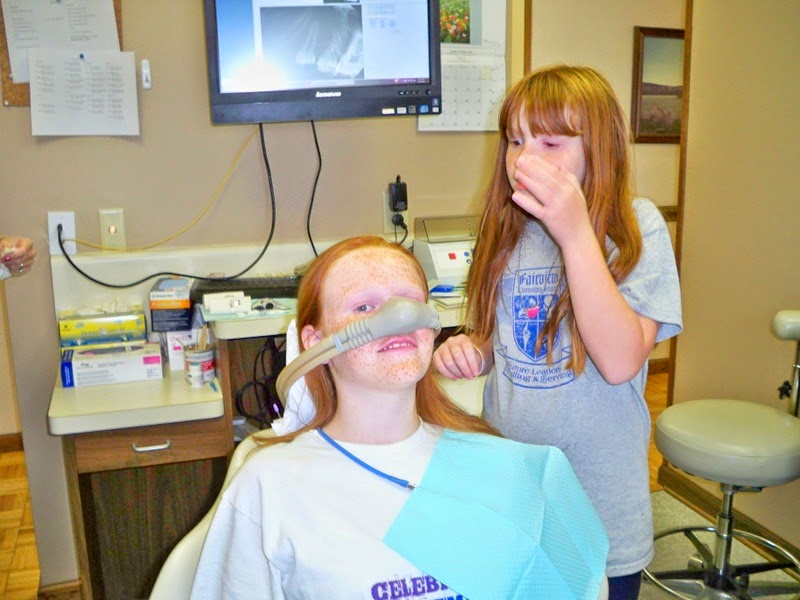 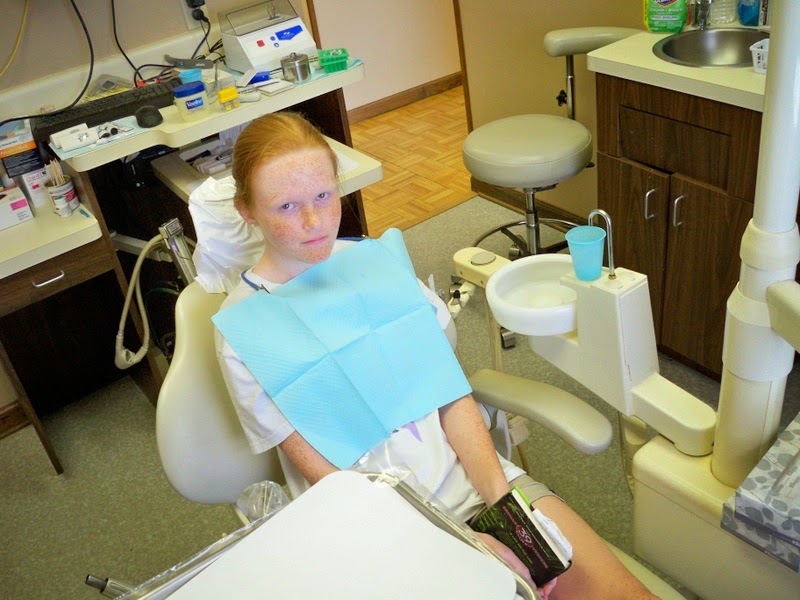 After the verdict that the tooth must come out, just prior to meltdown. 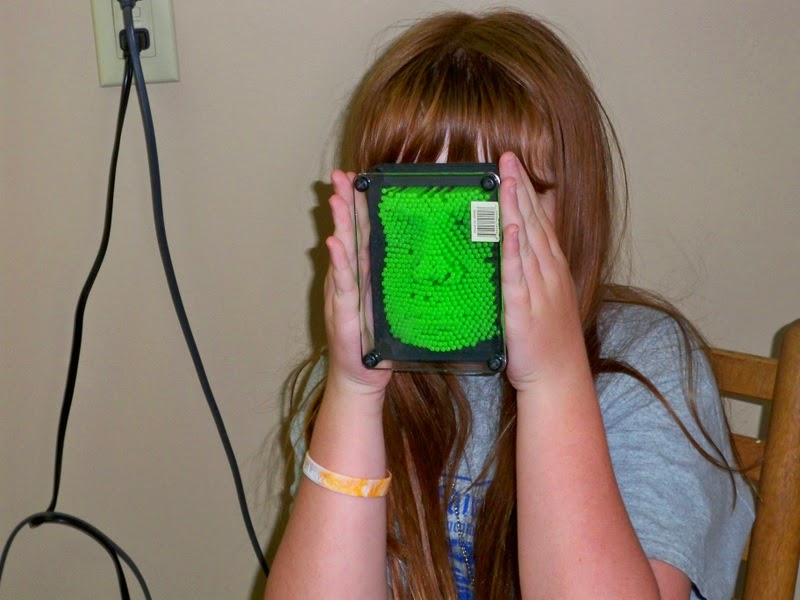 Hard to think about the needle in your gums when your sister is doing this! 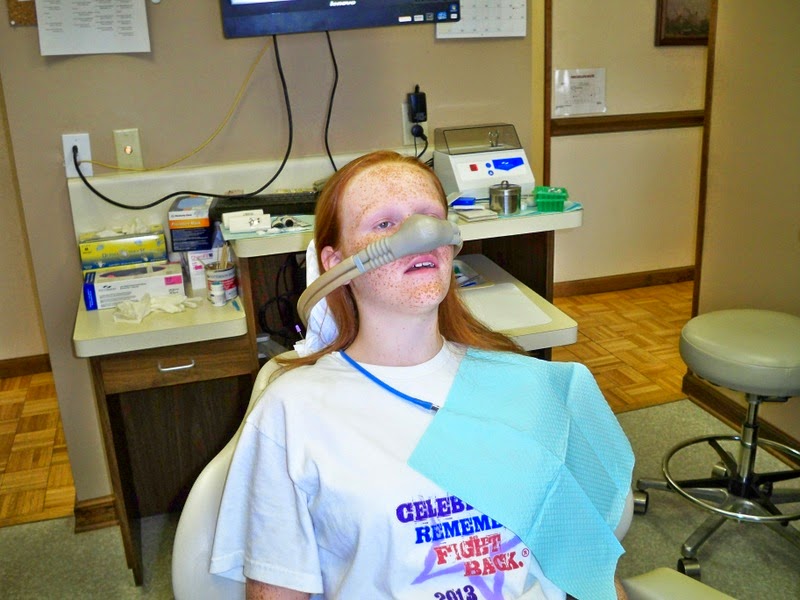 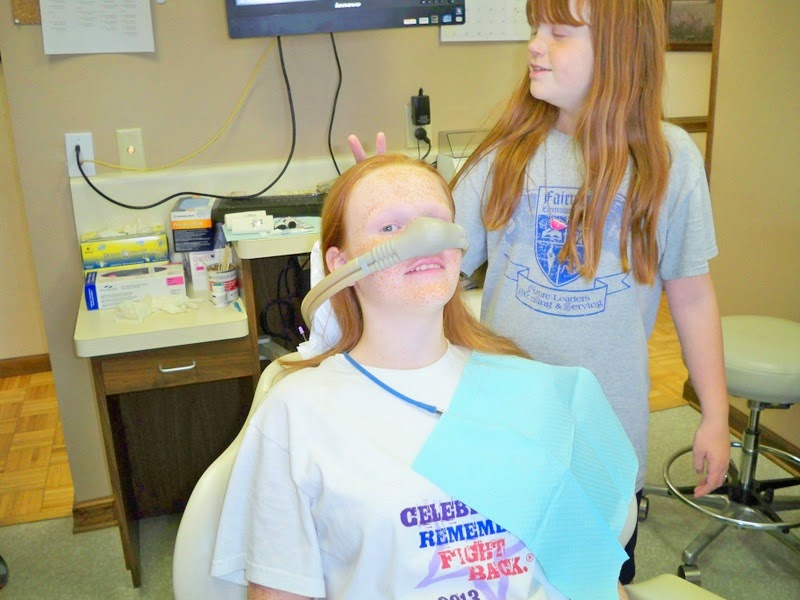 It wasn't too long after this that Sarabeth said, "it's ok, Jamie, you can go sit with Mawmaw in the waiting room". Right after Jamie shrieked and covered her eyes when they stuck a big ole needle in sister's gum. Before the dentist struck again she said, "Jamie, are you ready?" And Bethy said, "it's ok, Jamie, you can go". They're such great sisters. And great nieces. And a great blessings.... which are probably filed in a box somewhere with my bible...