Yesterday was my mom's birthday. Her brother John and his wife Gerri are in town from Florida. John is the youngest brother. There were four boys in a row and then three girls in a row. My mom is the middle girl. Anyways... John and Gerri are here for the week, staying in the house of a friend of theirs? Or something? I'm not sure. They're not staying with us. They came over yesterday and then we went to Wendell's for lunch. Wendell's is sort of a meat and three type place. Everyone except for me and Pop had liver and onions. :shudder: I had fried chicken and Pop had grilled chicken. The food was good. The company was great. The stress on my back was unbearable. 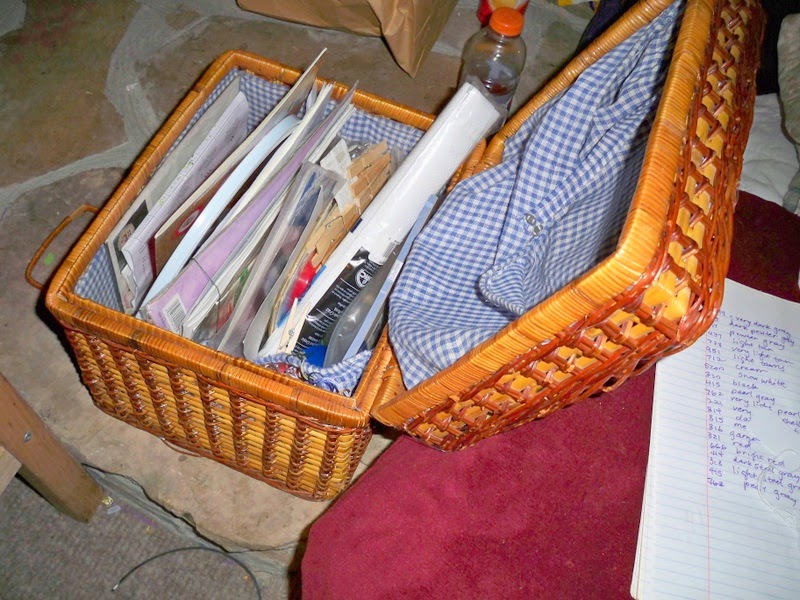 Afterwards we visited the little thrift store next to the restaurant where I picked up this amazing picnic basket for only $5!  I knew it was perfect for a sewing basket so that I could organize my embroidery supplies. Sidebar: whenever I type the word "picnic basket" in my head I hear Yogi Bear's voice saying "pick-a-nick basket". Anybody else have that problem? Gerri found a great deal on some dishes and made arrangements to go back and pick them up later this week when they've been packed for travel back to Florida.

During lunch Uncle John entertained with stories about mom's early childhood when they lived in Cohutta, Georgia. Cohutta is near Dalton, Georgia, in the far northwest corner of the state. It was (and still is) primarily rural and poor. Their house - my mom's first home - didn't have electricity or running water. The barn and the chicken house had water and electricity but their home didn't. They used well water to drink until a cat fell in the well and ... well, contaminated it. Then they finally piped running water into the house. Can you imagine having seven kids without running water and electricity? Ironically, the year they got electricity was the year that the last child was born. Apparently they found something else to do at night.

All was well with the grandbaby at the doctor on Wednesday. They did not do an ultrasound, she goes back for that next Thursday and I'm taking her! I've heard this thing on the internet about how the placement of the placenta in early pregnancy is an indication of the sex. I mean, I know that's probably as much of an Old Wives Tale as the peeing in drano thing or the swinging wedding ring or how you carry... but I'm still going to take note of it, if possible.

I'm so proud of Tasha because she has gone back to work! I've been there... I know how hard it is to work in early pregnancy. I also know that she wants to give this baby the best life possible, which was always my motivation. Every job I ever worked was to provide for my kids, especially those last few months that I worked full time while Austin was finishing high school. I can't tell you how many times I wanted to just give up... how many days I came home in extreme agony... but I had to give him that stability for his last few months of school. Thanks to help from family, we didn't have to move out when I lost my job which would have been devastating.  I hope that seeing Tasha work hard to provide for their baby will be inspiration to Austin to do everything he can to find a job. There are a lot of places hiring.

Going out to lunch yesterday was painful. I wanted to push myself because we don't see Uncle John that often, just like I pushed myself last weekend when Grandma was here and the result was the same. I was in such horrendous pain by the time we got home - after a little detour through Helen - that I was pouring sweat and sick to my stomach. Today my spine feels like it's on fire and in a vice. I'm having muscle spasms and my legs feel like they're made of lead. It's crazy. I was out and about for just a little over two hours and not all of that time was sitting. Two hours of activity takes me out of commission for days. That's just ... frustrating. 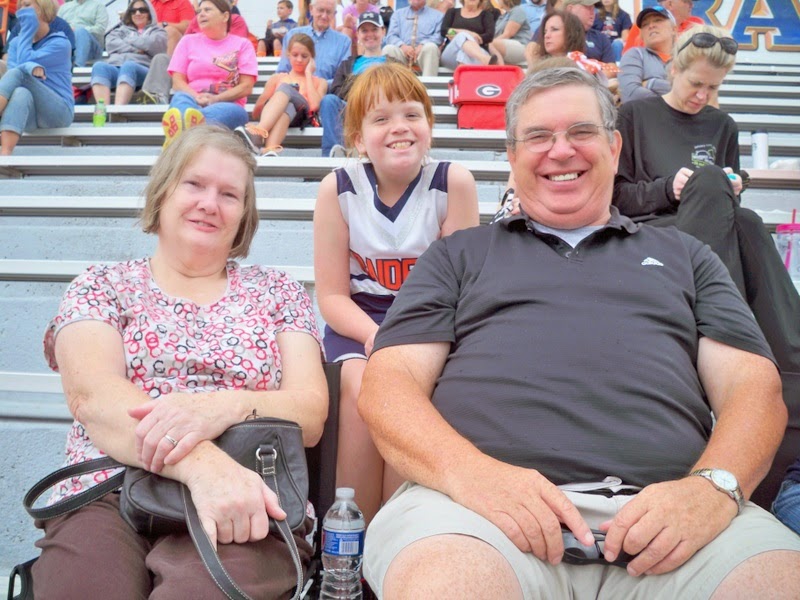 Mom and Dad went this morning to watch my niece Jamie cheer. I sent along the camera and Sarabeth took a bunch of pictures for me. Jamie is the one with red hair, in case you can't spot her. 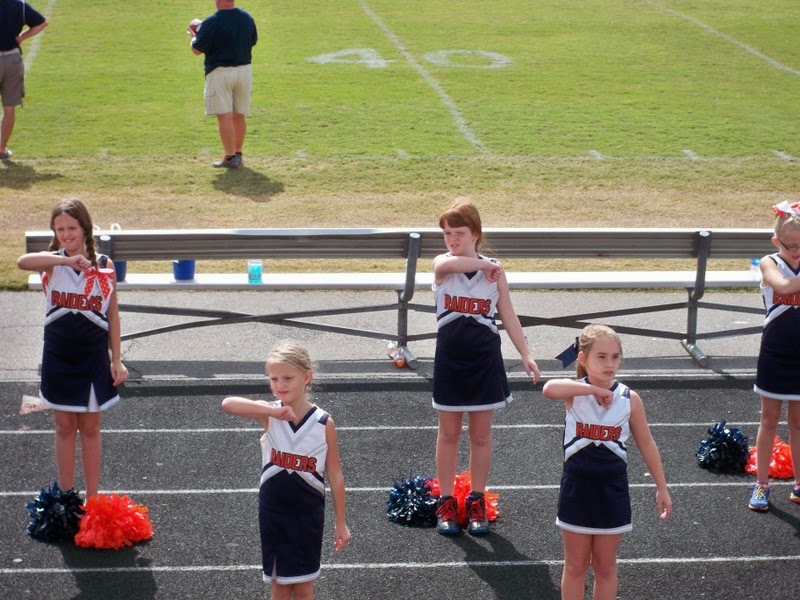 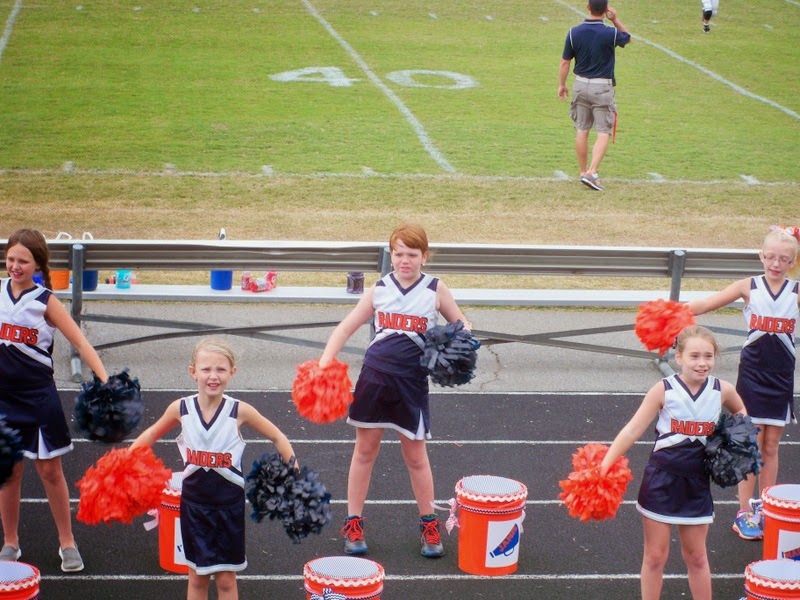 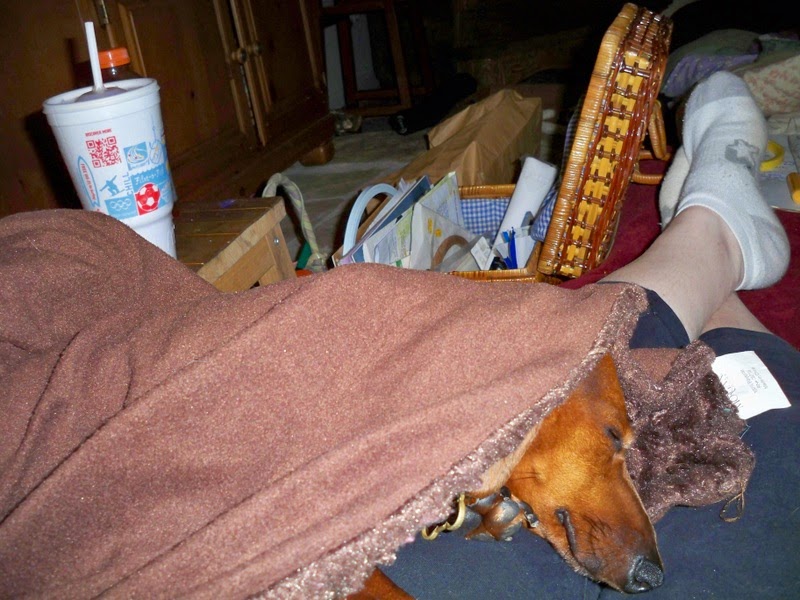 And now my parents are at a Sunday School social and I'm dog-sitting while watching the Florida State game. I've been a Gator fan ever since the Darby era. I mean, I lived in Florida at the height of the Tebow reign and it was great to be a Florida Gator. At least it was then. I'm not a fair weather fan but I did promise my children to change my allegiance whenever they gave me a grandchild. Even though Austin knows nothing about football, the older boys insist that a grandchild is a grandchild and they have invoked the Grandchild Clause. I'm told a FSU sweatshirt is in the works. I'm watching FSU vs. NC State. And trying my best to pull for the right team. I figure it's the least I can do. Go Noles.

I guess that's about it for now. Can you stand a few more Jamie pictures? I love my sweet girl! 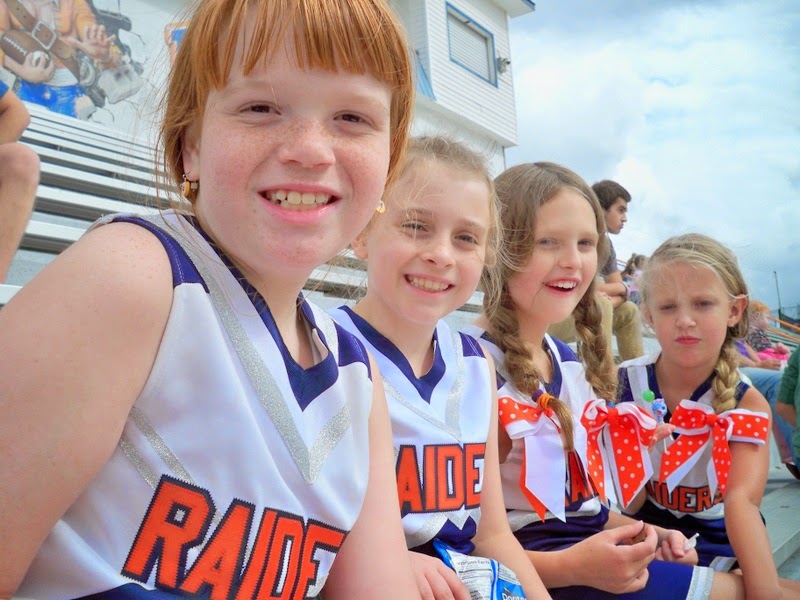 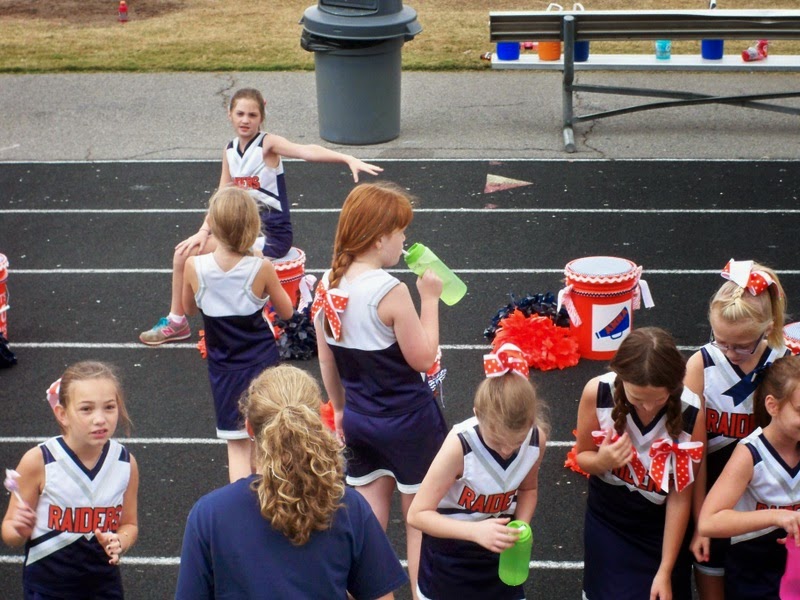 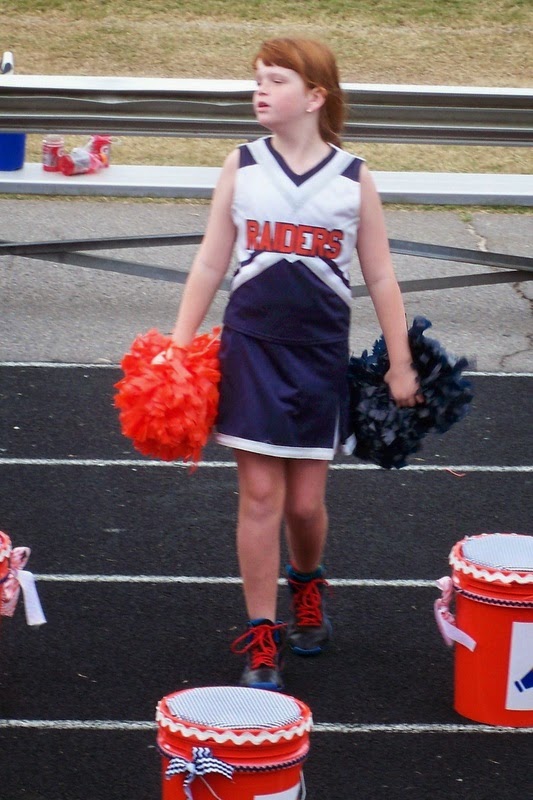 Heather as soon as I saw your 'pick--a-nick' basket in the picture it made me think of Yogi!...lol. Great pics of Jaime. She looks so much like you! Pretty girl. Can't wait for pics of the new grand baby...xxx