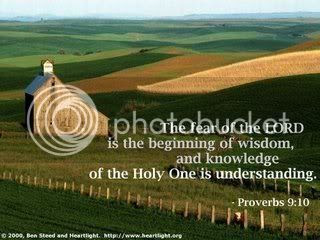 Yesterday I started trying to wrap my mind around the concept of fearing God. We want God to be an accessory... our last resort... in the periphery of our lives...
Most of us believe in God... or "some higher power"... who is benevolent and charitable and who can grant us that which we desire.
Many of us believe that you have to have some sort of relationship with God to insure that we go to Heaven when we die... although we all probably have some variation of understanding as to what establishes that relationship. For some faiths, you're born into it.... for others, you're raised in it... and some others believe that you have to seek a relationship with him. Still others believe that you achieve immortality by the things you do here on earth.
Many of us seek that eternal assurance or earthly assistance but we mainly do it because we need God, not because we fear God.
I don't know what made me start thinking about fearing God... but the thought formed in my mind during church and sort of lingered. I spent a lot of the day napping and resting and nesting. My back is bothering me and I knew that I wouldn't have free time for a few days (although I love that there's a holiday in the middle of the week! Woohoo!) so I took advantage of a quiet Sunday afternoon. But as I nested... the thought stayed in my mind, "Do I FEAR God?"

I googled the words, "Fear the Lord" and found a sermon on the subject. I actually found several things on the subject. I looked the word "fear" up in the concordance of my bible and thought about several of the verses there. Lots of stuff in Deuteronomy.... that's a book that's all about the nation of Israel and them learning the Law and it's really dogmatic. Truly, at that point in biblical history, people had a fear of the Lord... if you realize all that they had to do to have a promise of eternal life, you realize they lived in fear. (and I suspect in a constant state of discouragement because NOBODY could keep the Law, which is why we needed a Savior... but that's a different topic.). There are verses in Joshua, 1 & 2 Samuel, Job, Psalms... and then we get to Proverbs - the book of wisdom - and it's chock full of verses about the fear of the Lord... here are a few thoughts for you:

Serve the Lord with fear and rejoice with trembling. Psalm 2:11
Let all the earth fear the Lord; let all the people of the world revere Him. Psalm 33:8
The angel of the Lord encamps around those who fear him and he delivers them. Psalm 34:7
Fear the Lord, you his saints, for those who fear him lack nothing. Psalm 34:9
Blessed are all who fear the Lord, who walk in his ways. Psalm 128:1
The Lord delights in those who fear him, who put their hope in his unfailing love. Psalm 147:11
The fear of the Lord is the beginning of knowledge, but fools despise wisdom and discipline. Proverbs 1:7
To fear the Lord is to hate evil; I hate pride and arrogance, evil behavior and perverse speech. Proverbs 8:13
The fear of the Lord adds length to life, but the years of the wicked are cut short. Proverbs 10:27

There are more.... but I'm running out of time this morning... here's the point: we have made God, the creator of the universe, the one who holds the planets in place, the one who controls every breath we take... we have turned Him into a warm, fuzzy, cuddly creature who we can entertain at our leisure. We ignore Him, we ignore His commands, until such time as we need him.

I have this problem with Austin. He won't do his chores until he faces a consequence for not doing them. I can talk until I'm blue in the face. I can yell, scream, beg, cry... nothing works. But when I take the remote control away from him, he becomes very obedient. The problem? He doesn't fear me. He loves me. He appreciates me on some levels. He wouldn't want to live without me. He doesn't WANT me to be angry. He just wants me to be in my "mommy box"... provide for him and not expect anything in return. That's how we view God. And by we, I mean me... and maybe you, I don't know. Maybe you see yourself in this.

What has happened in Christianity since the feel-good sixties - is a turning from the hellfire and brimstone preaching that taught people to fear God.... to respect who He is. We have tried to make God politically correct. We have tried to appease man and not offend anyone by speaking what God really says. We complete our Sunday morning obligatory church service (or not) and we do our little cursory bible study and prayer every day (or not) but we don't fear Him. We don't worry that we are not obedient. We don't worry about the fact that He is displeased with our actions. We don't worry that when we claim to be a Christian and then act like the devil, that we are preventing people from approaching Him - because they don't want to be near us or like us.

I have been on a spiritual journey myself but it has lead me nowhere...

I think fearing God is honoring God and if we do that we do what He wants and walk in His ways, we are in fear of Him. To be in awe is what I think it means. Trembling while rejoicing because He is greater than anything we could ever imagine.
'On Ya'-ma

Excellant entry this morning. Lots to think about.

FEAR...that has been the key word of my week. Seeing as I am facing surgery in two days. FEAR...let's talk a little about FEAR.

I grew up believing in a God that would "strike me down" and throw me into hell and burned for all eternity if I made a mistake. Fire and Brimstone.

I grew up believing in a God who was judgemental and would be judged again at death before "entering the pearly gates" and after harsh judgement and ONLY IF I PASSED certain criteria, I would be allowed to enter those gates and walk the golden paths beside the Lord.

THAT is not the God I know and experience daily NOW.

I personally don't think you have to FEAR God to respect God or to rejoice God or to honor God. Fear is not something that is of God.

I think when I fear, it is coming from another place OTHER than God.

Love drives out fear and if God is love, then there is no fear! Jesus lived it, and showed it and died for it. All we have to do is trust more and fear less.

“Perfect love casts out fear” We see perfect love in action in the life of Jesus. We see him in fearful situations, turning instead toward his opponents in love. Christ lives within us and can provide the same kind of loving response we may need in threatening situations. When in those situations, we remember that we aren’t there alone, but the God of love is right there with us, "The Spirit within you is far stronger than anything in the world.”

See??? It's in the scripture...WHY would God want us to FEAR him when it's written otherwise???

The only other thing I want to add is that there may be a better word for “fear” such as “awe”. But of course the word “awe” or “awesome” has lost some meaning in our contemporary context.

When the Bible speaks of having “fear of God” it often has a connotation of reverent awe.

“The fear of God is the beginning of wisdom”.

This is a saying that people could really take the wrong way- as if fire and brimstone await those who aren’t “afraid” enough.

I don’t think that’s the point though. The point is to orient one’s life and understanding around the fact that God is sovereign over everything.

I think the point is that we should never be too flippant about the Creator and we should always remember that despite His loving kindness and His closeness and availability to us, He is also always, by His very nature- “awesome”.

Still fearful about my surgery..which is NOT of God,
Jen

Read this entry time and again, then once more after that. Certainly food for thought.

This was an interesting entry to me at this time because I am finding my way to God.
I don't think I have to fear Him to be accepted. I think that I need to walk in his path. Do as He would do.
I am trying to surround myself with people that walk the walk and live the life that God intended us to live. Not just go to church on Sunday and then spend the rest of the week going against everything that God intended us to be.
Sheri

Without fear, there is no courage, and courage is a great virtue.

Depending on your form of Christianity, however, fear of the divine should not be at all crippling. If my understanding if right (and there are No guarantees on that), your version sees Jesus as the embodiment of a new covenant (which, for example, lets you where cotton poly blends and keep a clock in your house) in which the requirements for salvation are minimal, but the duties of equanimity fall back on you. Right?

So fear of the divine, not the issue. Fear of yourself perhaps more so?

The courage to stand up for both the divine and yourself, is perhaps the true goal.