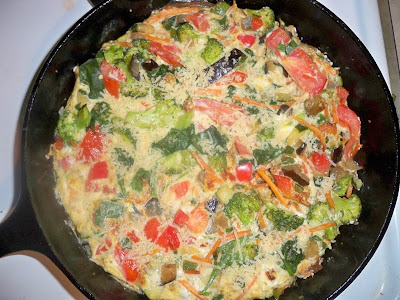 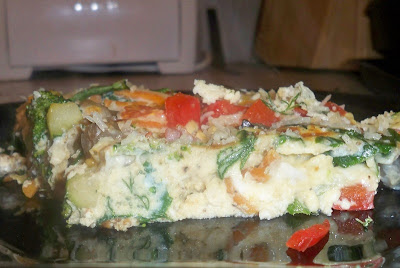 I did it! I made a frittata for breakfast/brunch!
It was really easy... I googled a few recipes for the basic technique. I've done one once before but I wanted to make sure I knew what I was doing.

I started by chopping - dicing - slicing - all the veggies I wanted to use. I basically just used the things I had in my fridge - about 3 cups worth of veggies. Yes, that's a lot. It was intentional. I wanted to go heavy on the veggies and light on the egg. I used 1/2 an eggplant, 1/2 a zucchini, about 1/2 cup of chopped broccoli, 1/2 a jalapeno, about 1/4 cup of red bell pepper, 1 cup of spinach, 1/4 cup of scallions, 1/4 cup of shredded carrot, 1/4 cup of chopped tomato... lots and lots of veggies.

I sprayed my big cast iron skillet with non-stick spray and added 1 little tiny teaspoon of olive oil. Once it was hot, I put in all the "sturdy" veggies - leaving out the spinach, scallions and tomato. I let the sturdy veggies cook until they were tender, then added the other veggies.

I blended 3 whole eggs plus 3 egg whites, 1 tablespoon of skim milk, 1 tablespoon of fresh dill with salt, pepper and celery seed (which I added by accident, thinking it was pepper and it actually turned out to be a nice addition). I also added 1 oz of soft goat cheese - because I had it and I knew it would melt well.

I poured the egg mixture over the cooked veggies and stirred until the edges began to set. Then I set it under the broiler for about 5-7 minutes until the top started to brown... then pulled it out and let it sit to set for a few minutes.

Cut into four generous slices, this is 3 weight watchers points per serving. So not only did I have a great breakfast today - I made breakfast for the next 3 days! Yay me!

That looks delicious. I have never tried making one but I think by following your recipe I may try it.

Looks great and made my stomach growl!!