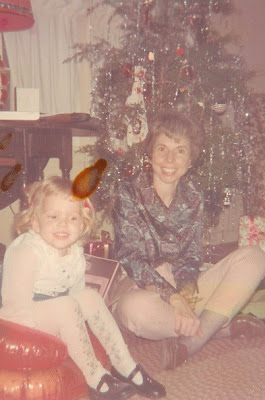 I love this picture... not just because I'm cutie-patootie-Suri Cruise-fashion-worthy in my precious little dress and patterned tights (I am still a fan of tights!) and the t-strap shoes are a step ahead of plain old mary janes... I also love this picture because my sweet Steel Magnolia was sitting there on the floor criss-cross-applesauce (or as we used to say before political correctness - indian style). She was young... less than 50 (she was born in 1923 and I was born in 1968) and she was, and still is, an example to me of living gracefully.

Yesterday, Aunt Claire (my dad's little sister) got the call from the medical professionals who care for Grandma letting us know that it is no longer wise for her to live alone. Uncle Bruce, Pop and Aunt Claire will be getting together on Wednesday to discuss what will happen to Grandma for the next season of her life. Without over dramatizing the situation, it breaks my heart.

Grandma was, just like me, forced to raise three kids on her own with little or no financial support from their dad. She has been single more than she has been part of a couple. She remarried, briefly, in 1985, but her second husband was in declining health and died within five years of their marriage. She met her sweetie, Jerry, who was a widowed neighbor. They never married because (as she explained to me) two marriages were enough for her. I totally get that. She has lived on her own more than she has lived with others and I know, from having lived mostly on my own (with Austin) what a huge transition it is to live with others. Not just to live with others... to give up the independence of driving... traveling... being a part of her community.

Last Memorial Day weekend when Austin and I went up to see Grandma and go to see a show at the little community theatre there... we went to Huddle House with her and the waitress said, "are you feeling better, Mrs. Harris?"... and then the usher at the theatre asked if she was over her cold... and as we were seated another audience member asked if she was better... and I said to her, "It seems that all of Clay County, North Carolina knows more about your health than I do!" She is loved there. I totally get what it's like to be bonded to a community, to enjoy those small town relationships and to feel like you have a place in that world.

I think the long-term plan is to move her to an assisted living facility near Aunt Claire, who lives in Acworth, Georgia. Acworth is Northwest of Atlanta, near where I lived in Woodstock, about 45 minutes to an hour away from my parents house, depending on traffic. It's also much, much closer to our other Steel Magnolia, my great-aunt Bette. Instead of battling the curvy mountain roads to get to Grandma (curves hurt my back like you wouldn't believe!) it would just mean battling Atlanta traffic (which I am completely comfortable with)

But the thing is... what sticks with me is that she told me that she wanted to stay in her house as long as she could. That was the only input I had in the discussions last night between the Elders. She wants to be in her house as long as she can. I know I sound like a broken record but I almost feel like she imparted me with that request in the same way someone passes a torch, it was my message to carry for her in case she couldn't express it herself. Last night daddy said, "well, maybe this was as long as she could". I know this may be true and I hope we can help her accept this.


As my daddy pointed out, they are meeting on Independence Day to talk about Grandma losing her independence.


Having just lost my own financial independence and having to move from a place that I loved... even though I very much love being here with mama and daddy and very much love seeing Cody and Quee every day and I love the fur babies around here so much... just as Grandma will love being near Aunt Claire and her kids, my cousins Donald and Michelle and their kids... and Aunt Bette... and my brother David and his wife and four kids live near there... she will find joy there, I have no doubt, she will make it work because she is a Steel Magnolia, that's what they do. But having just been through a similar transition, I have complete empathy for her.

I'm going up to Grandma's house with daddy (or maybe driving separately, I don't know the plan) on Wednesday and will stay for a time that is not yet quite determined. I think Uncle Bruce and Aunt Vicky will come up over the weekend to stay and I will go back home and come back whenever I'm needed, as long as I'm not working.  Aunt Claire is taking care of an internet connection for me, which was my only request. I'm really low maintenance... coffee in the morning... internet... and that's about it. I'm getting all my prescriptions refilled today so that I don't end up in a medical crisis of my own while I'm with her. I hope to take my scanner, although it is big and bulky, it would be awesome to copy even just a fraction of the treasure of old photos and documents she has. It would give us something to do, a distraction. 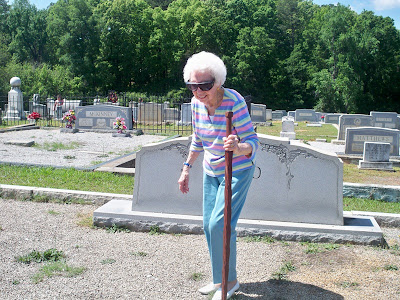 I've never spent the night at Grandma's house, that I can remember, since I was an adult. We stayed in the same hotel room when we went on our pilgrimage to the Ward hometown of Lincolnton, Georgia, back in April but that was neutral territory (a hotel room). I'm not one who is comfortable outside of my own nest. She has, as you can imagine - at 88- her own habits and way of doing things and I have developed my own peculiarities even though I am only half her age. I just think... for all the generosity she has shown me... for all that she has been through... she deserves the dignity of transitioning into this season in the way that makes her happy. I can do whatever I need to do for as long as I need to do it. She deserves it. And I can't help but believe that God has ordered my life in such a way that I can be there for her now.

Im sure you'll be there for her and make sure she recevies all the dignities possible.