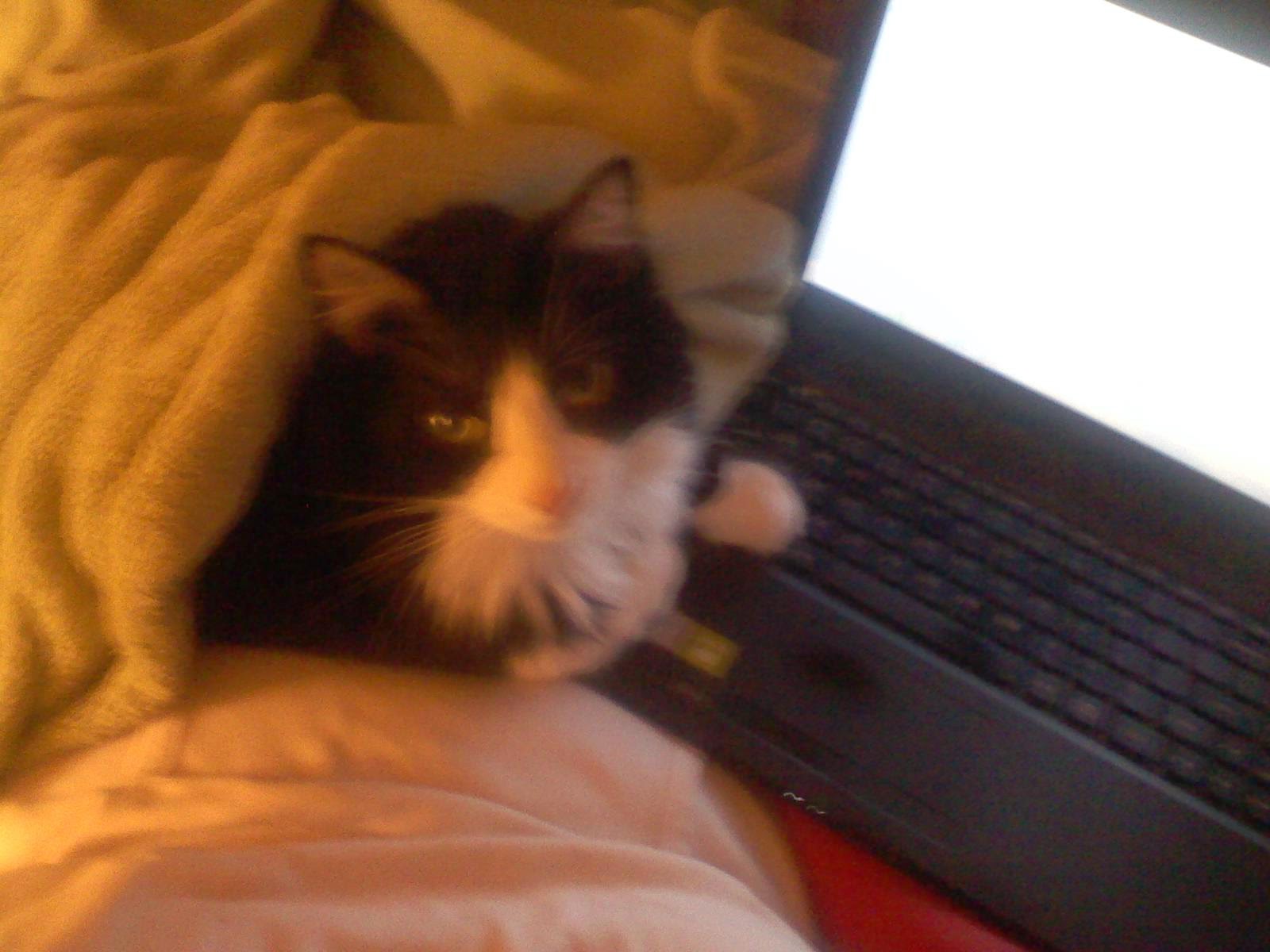 Cold Mondays in February get no respect. I'm going to give a little love in hindsight and look forward to today.

1. This cat curled up under a cozy blanket supervising my internet time. Taken with my cellphone. Love. Love. Love!

2. Austin had a job interview with the local Ford dealership. The good news is that the Vocational Rehab people are really pushing for him to get this. The bad news is that he HAS to have his license. Which he doesn't.

3. Austin sees this as the catalyst to push him to get his license, which would be a good thing.

4. Also, I'd like to say that I'm glad that he has waited to get his license. Sixteen year old Austin didn't have the maturity for such a responsibility. Twenty-one year old Austin (on March 1st) is much improved. I'll still worry/wonder about him behind the wheel but not as much. Babies have a way of teaching young people that they are not immortal.

5. While waiting on Austin outside the dealership, I sat in the car with my window cracked filling out paperwork I'll need tomorrow for my re-eligibility appointment on Wednesday. I was focused on the paper and didn't notice it was snowing until some flakes blew in the car window. It was flurry-ing like crazy.

6. Although I'm usually a big fan of the fluffy white stuff I've already predicted that there will be no big snow this year for us. That way, if we go the whole Winter season without, I can temper my disappointment with the knowledge that I WAS RIGHT!

7. I got a call yesterday from the Imaging Center letting me know that my ultrasound today was going to be $800 and something but that they would allow me to pay $600 at the day of the appointment and be billed for the rest. Apparently whatever funding or payment program the clinic has worked out wasn't explained to the nice pre-admission ladies in the Imaging Center. The clinic is open only on Tuesdays and Wednesdays so there was no one for me to contact to connect the dots. I had to leave a message. It's a Reason To Love because the girl from the Imaging Center was super nice and really did all she could to figure it out. Honestly, I should have known more about who was handling payment. I just assumed it was going to be like my mammogram there where it was just ... done.

8. It's also a Reason To Love because I really don't want to get out in the cold OR have anyone touching me today because... the Crazy Gut Pain is definitely hanging around today.

11. My sister-in-law to be (in 123 days, I think, don't want to count all over again) gave me a lovely and very generous gift yesterday. She continues to be all that we could have dreamed of for Bryan. I love the way she loves on people. She's a gem and we are blessed to have her. And Angie, my best sister-in-law, needs a little help in carrying the weight of dealing with me. She needs someone to tag team with her.

12. Austin and I went to the grocery store yesterday. We just always have a great time hanging out and I so very much appreciate his help and support. Then he went to Tasha's to give her a little support because she was really sick the night before.

13. Which means.... the Whine Cellar is an island of solitude!

14. The Bachelor was on. It's entirely cheesy and immoral and the whole premise is just... I don't know... it doesn't sit well with me but I have to admit, it's a train wreck I can't look away from. I find myself getting wrapped up in it. Guilty pleasure.

I could probably come up with a few more but I'll leave it there so I don't end up writing a novella. Hope you have a safe, warm, happy week! Love and hugs, y'all!