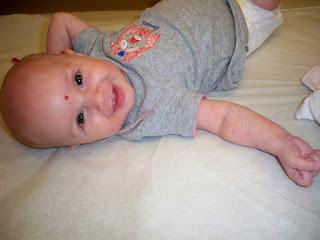 Yesterday morning I had a doctor's appointment with my primary care dr. He's local, it was an early appointment so I was less likely to have to wait, he's a really nice guy and ... so not much stress involved in seeing him. However, I had a migraine questionnaire to get him to fill out and I wasn't sure if he could do it.... would do it... would have to charge me for doing it... or would fill it out in such a way that would help my disability case. 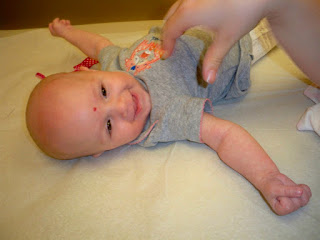 While I was waiting a guy came into Urgent Care (in the same office) having cut his finger on a hedge trimmer. He had his finger wrapped up in his shirt and was bleeding a good bit. He was about to pass out when one of the receptionists ran around to grab him a wheelchair before he hit the ground. They were afraid they were going to have to take him to the hospital by ambulance but it turned out to be something they could fix at Urgent Care. Living in a small town, the attitude here is that everyone is assumed to be a friend & neighbor and people are more likely to interact than what I've seen in the suburbs. The whole waiting room was a-twitter with good wishes for the poor fella. Even the nurses in the back offices were talking about him when I finished with the doctor.

Fortunately my doctor was one hundred percent willing to help with the form. We sat there and went over the questions together. He completely agrees that my headaches are disabling and occur too frequently for me to be employable. That made me feel a lot, lot better about things.

I went home and ate about a half a can of diced mangos for brunch. I was hot, I didn't feel great and I just couldn't manage to eat. I worked on my current embroidery project and caught up on recorded tv. Then it was time to take Cosette to the doctor. 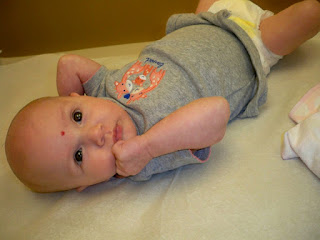 Cosette has thrush which hasn't seemed to bother her and hasn't affected her mom so we've just been waiting for it to resolve. It hasn't so we took her in to see the doctor. Also, she doesn't poop. Ever. On July 1st the pediatrician said to give her pedialax if she goes 4 or 5 days without pooping. It's a suppository. Once they do that, she poops a bunch but then doesn't poop again until the next time they give it to her. She's eating well and gaining weight - up to 11 lbs, 2 oz yesterday! And 24 3/4 inches long! She's a happy baby up until about the 4th or 5th day of not pooping and then she's very difficult to soothe. She holds her body really stiff and doesn't just cry, she has a fit! 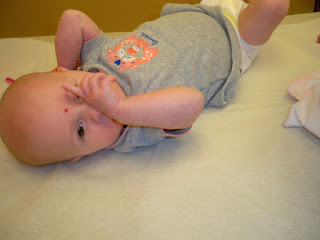 The pediatrician checked her out... had to do the gloved finger in the butt which she was NOT FOND OF... at ALL! He discovered that her anatomy is too close together down there. It's something called anterior displacement of the anus. It can be quite severe sometimes and hers is not but... it does make it harder for her to poop. Since she's exclusively breast fed there is no way to change the milk she drinks (I asked if there's anything Tasha could eat or do differently - there isn't) so the doctor wants to try giving her a little pedialyte every day to get more liquid in her stool so that it will pass easier. The only real cure for the problem is surgery which... we don't even want to go there. 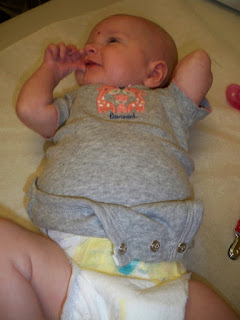 He also wanted to do an xray to make sure the internal anatomy was ok and that there were no blockages or anything. One of us had to put on the big lead apron to help hold her in place for the xray. Not that she's pregnant or anything, but Tasha being of childbearing age, it was riskier for her to be exposed to the xray so I did it. I wanted to get a picture of me in the get up because... NanaTron is pretty awesome looking! One xray tech held down Cosette's feet and covered her thyroid and little parts with the shields. My job was to pull her arms above her head - with her elbows by her ears and baby girl was NOT A FAN of this position! She is so freaking strong! She screamed bloody murder the whole time we were in that position and it broke my heart.

They'll call today with the results of the xrays. I'm forcing myself not to google this condition because the little bit I did last night had been boohooing. Once she's six months old I want us to introduce baby-lead weaning to her. That's when the baby is still breast fed for her nutrition but gets food to feed herself - think of like playing with food - because it's not for the nutrition, just to get her used to tastes and textures. At that point we could start introducing fiber into her diet and also give a sippy cup with water. 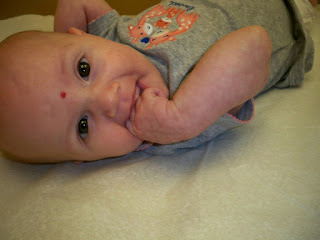 After we left the doctor we picked up Austin from work and grabbed a few things in the market. I was coasting on fumes by that point. Austin was exhausted from a long day at work. Tasha hadn't slept much the night before and was worn out from the doctor visit. We were really a pretty pitiful pack of people. I took them home and finally got home about 7pm. All I'd eaten all day was that little half can of diced mangos. Fortunately, Mawmaw and Pop had dinner waiting for me, it took me another hour before I was settled enough to eat but it was an absolute feast at that point!  I was so tired that I didn't notice Little Kitty was underfoot and I stepped on him. Poor Kitty! He avoided me for about an hour after that... hiding under the bed like I was a stranger. He finally got over himself because I woke up during the night with him laying in my lap as usual.

Today HOPEFULLY will be a restful day. Marquee went to the doctor yesterday and Ollie's still cooking. She's 39 weeks so it could be ANY DAY! Her ob doesn't do inductions until 42 weeks for a first baby so we might have three more weeks of this but I hope not, for Marquee's sake! She's a tiny girl. I'm 5'2 and she's shorter than me... there's nowhere else for Ollie to go! I'm constantly mindful of not wearing myself out so that I'll be ready for the trip south to welcome Ollie. I can't wait to hold him! 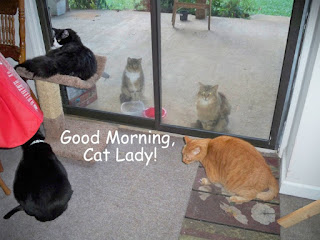 So that was my marathon day yesterday... left the house at 8:20 to pick up Austin and take him to work before my doctor visit... then got home at 7pm after Cosette's dr appointment, picking up Austin and grocery shopping.

Pictures of Cosette are from the doctor visit BEFORE she got pissed off.

And a picture of all my indoor and outdoor cats.

Breastfed babies do not poop everyday! They can go as much as a week and be fine. Laxatives are not needed, and have harmful properties. Obviously, this new information should be considered, and you live in a town where there are probably not many pediatricians to choose from, but research yourself about breastfed babies poop since her doctor is not educated on the matter. Most are not breastfeeding educated.

Definitely we don't want Cosette to have to use laxatives. The plan for now is to give her pedialyte every day to increase the water content in her intestines. We're really confident in the doctor who is treating her. The point is not that she doesn't poop more than once a week... the point is that she only poops after a laxative. If she wasn't given a laxative she would never poop at all. She has a lot of stomach pain and gas after several days without pooping which is heartbreaking to see. Knowing that there is a problem with her anatomy means taking a different route in helping her poop. The higher the water content in the poop, the more likely it is to find a way out. All that being said... I got a text at 4am from her mommy that she pooped. I don't know if she had pedialyte before then but she had not had a laxative so that's good news. Mom, Nana, Mawmaw and several others in Cosette's life have a wealth of knowledge about breastfeeding so even if the doctor wasn't knowledgable about breastfeeding (which I don't feel is our problem) we would know what was ok and what wasn't. A screaming baby with a rigid belly is not ok.

Sounds like you've got a good doctor on your hands. Yay!

Sorry to hear about Cosette not poopin and problems with her plumbing. Is there a good chance it will correct itself as she get older?
I was wondering what is the pink mark on her forehead? Is it her birthmark? Either way she's just too cute!

Best wishes with Oliver's impending arrival. Tell her to go to the mall and walk, walk, walk. It's air conditioned so she won't get over heated. There's many old wives tales on getting labor a kick start but walking will also get her body all loosened up. Kinda like stretching before exercising. Many small women give birth to big babies naturally, getting herself ready also helps with the healing.

God Bless over you and yours right now.

She is a pretty baby and really growing. I hope the new little one arrives soon. I know the mom must be very uncomfortable if she is that little.