It's a two for one this week on Food Friday! We had an amazing food week with the 4th of July and with Marvin being off work on Wednesday night it meant an extra date night eating out for this girl! I'm really proud of my "eating to lower my blood pressure" plan for this past week and I feel like I was probably 80/20 good to bad ratio with my food choices and that's a doable percentage for me. I stayed on task with fresh/healthy/clean/protein and veg, fewer processed foods, etc. Did it lower my blood pressure? Not really. I had one normal blood pressure reading on Saturday and otherwise it's stayed high. Have I seen the doctor? Nope. We'll talk about that later.

Fun things first! On Tuesday night Marvin and I went to Wild Wings Cafe with two guys from his softball team, their significant others and some of their friends. I think there were nine of us in the party and it was busy and slow. We got there at 6:30 and by the time we were seated and fed it was 8:30 but it was fun to hang out and chat with everybody. I'm not a big wings person. When I go to Wild Wings I get the shrimp skewers which you can have with the same sauces as the wings. I went for ginger flavor and thai flavored. I ate the celery that came with Marvin's wings and I had fries on the side. 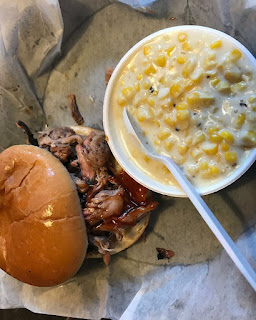 On Wednesday morning we slept in because... you know, day off (for him)... then we went to Moonie's Texas BBQ in Flowery Branch for an early lunch. You can click the link if you want to check them out. I had the pulled pork basket which comes with a pulled pork sandwich and a side... I had creamed corn. My dad makes the best creamed corn and I have a very high standard for the dish... and Moonie's is a close second to my dad's. The pork is amazing... lots of burnt ends (my favorite!). They have a Georgia Sweet sauce that I really love and of course, I had sweet tea to drink. It felt like a very patriotic meal for the 4th of July. Marvin had the same as me except he gets their pulled pork sandwich with slaw on it. I'm not a huge fan of slaw so... not for me. At Moonie's you order at the counter and then seat yourself. They were busy on Wednesday, lots of people were getting large to-go orders, I'm guessing for picnics and cookouts and such but it didn't take long for us to get our food and tuck into it. And of course, the nice thing is that you're then not obligated to tip because you've served yourself. The restaurant is clean and the counter service is friendly and generous. Definitely recommend them in you're in or around Hall County.

Little addition to this bit on Moonie's... Marvin said I have to tell you about their other sauces because he is a huge fan of Moonie's. They also have a Texas Red sauce that is vinegar based, a Carolina Gold that is mustard based and a Spicy sauce. I'm a fan of the Georgia Sweet because I don't like spicy and honestly, the Georgia Sweet is a bit spicier than the sweet sauce that I get at Sonny's BBQ and at North Georgia BBQ, just for comparison sake. I haven't tried Moonie's beef brisket because I'm mostly a pork bbq girl but Marvin says it's amazing. Anyways... 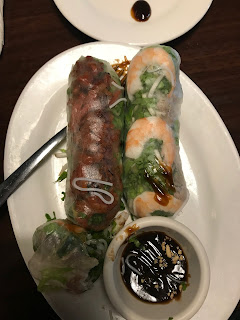 We went home and had a nice nap... yep, slept in and then napped... that's my kind of holiday! Then we went to dinner at Saigon Cafe in Buford near the Mall of Georgia. It's a Vietnamese / Thai / Chinese / Malaysian restaurant. Here's the thing... I loved the food and would very much love to go back and try lots of things from their menu. The menu is colorful and descriptive with big pictures of the food so you had a great idea of what you were getting which is so helpful when it's a cuisine you're not used to. I'd love to go back but the service was terrible. I've linked the online menu for you above. As a starter I had the goi cuon - slivers of boiled pork and shrimp fixed with vermicelli rice noodle, lettuce, bean sprouts and wrapped in rice paper. Dipped in a mixture of peanut and hoisin sauce. Marvin had thit nuong cuon - slivers of bbq pork mixed with vermicelli rice noodles, lettuce, bean sprouts and wrapped in rice paper.

I didn't try his roll but mine was awesome. I really love basil rolls when I get Thai food and this was comparable to that. The peanut sauce was thick and sweet. Honestly, I could make a meal out of the rolls and maybe a soup or something. They had pho - which I have never tried and really would like to but it was so steamy hot outside that I couldn't imagine eating soup. Marvin had me try panang curry recently at our favorite little Chinese restaurant close to his house and I loved it so instead of going with something I would normally order, I was a bit adventurous and ordered the panang curry with chicken. Marvin ordered chicken pad thai. We asked the waiter to make mine less spicy and his more spicy. Apparently that was lost in translation in the kitchen because the curry came out really spicy and the pad thai, not so much. I tried to soldier through it but Marvin was a real gentleman and offered to switch entrees with me. He likes spice... me, not so much... so I had his pad thai and he had my curry and we were both happy!


Our food came out quickly and despite the spice mix-up, both were really tasty, better than average for sure. But our waiter disappeared and we never saw him again. No refills, no "how is everything"... not even a bill. I found a pitcher of water and refilled our glasses - but there was no ice. Later I finally went and grabbed the first waiter I saw and said, "please, we have been abandoned, can you find our check so that we can leave?". The check came and there was no apology, no explanation... nothing. Honestly, if the service had been even fairly decent, this is a place I would ask to go back to frequently. There were lots of things on the menu that I would like to try, such as the pho. By the time we left the place was busier but by no means busy... there was no one seated anywhere around us. Maybe that was the problem? I don't know. I would just say... go there for the food because it was definitely a step above but be prepared to spend some time there, just in case.

When we left the Saigon Cafe we noticed that the Hot Fresh sign was lit up at Krispy Kreme and Marvin had a buy one dozen, get one dozen free coupon so... yes, please! Krispy Kreme was packed but it moved really quickly and everyone was in a friendly, chatty mood in line. We got two dozen glazed and it made for a nice dessert that night and breakfast in the morning. Marvin likes his donuts hot... I like mine a day old or so... so we both got exactly what we wanted. 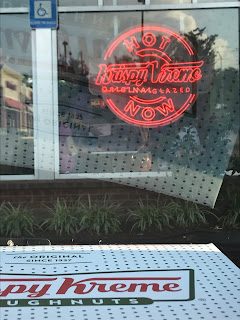 On Thursday we slept in again (notice a pattern?) munched on donuts and then Marvin fixed hamburgers for our lunch. He used blackening spices and bacon bits with bleu cheese dressing and they were amazing! Then I was feeling out of sorts and thought I should go ahead and drive home while I felt well enough. It's not a bad drive - about 45 minutes.

When I got home Cosy was still here with her dad and she was so happy to see me! I held her and she laid her head on my shoulder and stayed there for like... five minutes. She's not really a big cuddler because she's an introvert so it was a special treat for me to just be able to hold her and get lots of love. She had been such a good girl for her dad all day. She seems to have turned the corner on the potty training thing and just all of a sudden is owning it. As long as we don't bug her about going, she will let us know when she has to go and she stayed dry all day for her dad. I'm super proud - and relieved. The trick seems to be putting her in undies instead of pullups and letting her decide when she needs to go. She had really gotten to the point that when we tried to put her on the potty on a schedule she would absolutely refuse and throw a fit and... just totally not cooperate. Letting her decide when she needs to go is working for her. Austin feels like she's totally potty trained now but I told him we still had to work on the whole poop situation. That's a whole 'nother issue!

Since I've gone from eating to pooping, I guess it's time to wrap this post up. I hope you are enjoying my Food Friday posts as they are definitely one of my favorite type posts to write! Have a great weekend! This is what I'll be doing... in the middle of this... 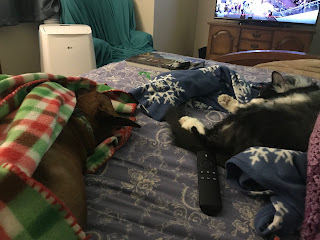