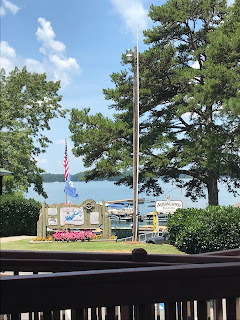 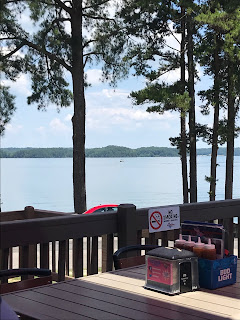 Good morning, friends! Just kidding. I'm writing this at 4pm on Friday afternoon but I did JUST wake up from a glorious nap. AND... I could go right back to sleep now but I'm staying awake to chat with Marvin while he's in between work and the DJ gig he has tonight. I'm having such huge guilt feelings about the massive amount of sleep I'm currently needing to function when he's out working these 12 plus hours a day, working every day of the week in one capacity or another. But I also know that it's something I haven't chosen for myself, it's just where I am health-wise at the moment and pushing myself just makes things worse.

The up side is  that the house was empty and quiet today. The painters finished up and our covered porch looks great. If the grass cutter came today, I surely didn't hear him. Pop's been playing golf, Austin has been at work and the house has been deliciously cool and quiet. It's perfect for sleeping. My back is hurting worse than yesterday and was worse yesterday than the day before. I hope there is a point where it starts getting back to normal but at the moment, I'm feeling pretty discouraged and overwhelmed. I also had a migraine last night that woke me up and kept me up for several hours which contributes to the fatigue. I sometimes have these headaches... and I don't even know if they qualify to be called migraines but basically the pain originates somewhere in my spine and radiates up my back to my head. It's different from my normal migraines, which sort of feel like they originate in a vein behind my ears and pound their way up my temple and behind my eyes.

Anyways... so a cold dark room and quiet house are awesome things right now but I also had a great time on Wednesday getting out to the great outdoors at Lake Lanier. For those who aren't local to Georgia, Lake Lanier is a reservoir that was created by building a dam on the Chattahoochee River back in 1956. It is a place where people go for boating, water skiing, fishing, camping or whatever you might do on a lake. Marvin lives really close to the lake so we have occasionally been able to enjoy the view at the lake, On Wednesday we had lunch at a place called Pig Tales, which is located on the lake (near the lake? there's a little bit of ground in between.). Pig Tales is a bbq restaurant that also serves a lot of fish dishes on their menu. You can check out their website by clicking here. https://www.pigtaleslakelanier.com/

Marvin and I had previously been to their sister restaurant, Fish Tales so we had an idea of the quality and standards of the particular restaurant group. Pig Tales, however, is a little different in that it is an outdoor restaurant. It was a hot day but the dining area of the restaurant is shaded and they have fans everywhere and I don't feel like we were particularly affected by the heat but at the same time, I was glad to get back to the a/c in the car when we left so... take that into consideration if you're heat sensitive. There wasn't any wait for a table - which is what we find most weekdays when we go out. Our waiter was attentive and came right away to get our drink and appetizer orders. The food came quicker than I expected... you know that feeling of, "who is she taking that to... it's too early to be... OH, it's ours!"

We started with fried green tomatoes which were served with pimento cheese layered between them. We gobbled them down so fast that I almost forgot to take a picture until there was only a bite or two left.
We had sweet tea to drink but I was also in the mood for a pina colada which... I probably hadn't had in 20plus years. Marvin had a voodoo juice to drink. Neither of us partakes in the adult beverages very often... maybe once a month or so, I guess? But it felt right to have a tropical drink in the heat and humidity that is life in Georgia in July. The heat, humidity, alcohol and my being out of sorts anyways with my back all combined to make me a bit tipsy and giggly but not sloppy drunk. It was one drink, after all. Just for the record, it had been more than six hours since I had last taken pain medicine. You have to be careful about those things.


For our meal, I had the pulled pork sandwich with sweet potato fries. The pork was great. I'm not a fan of slaw so I scraped that off - I had forgotten to request that they leave it off. The sandwich is served on big thick slices of texas toast and I ate that separately. The only suggestion I would make is that the texas toast be garlic toast, that would be perfect.
Marvin had the Brisket Philly which was sort of like a philly cheese steak sandwich but using bbq beef brisket instead of steak. He had the cripsy beer battered fries with his sandwich. It was a lot of food and almost more than he could eat. I don't often see him unable to clean his place - where with me it happens almost every single meal - so trust me, this was a generous portion of food.
It was not a cheap meal, despite the sort of rustic setting. We had an appetizer and cocktails which greatly increased the price. Maybe not a budget, end of the pay period meal for me but the price of the food is in line with the quality of the food. They are open well into the evening and I could definitely see that as a nice place to go at night when it's cooler outside. They allow pets so... that's unusual for any restaurant here but I'm sure it's because it's outdoors.


Finally the "blog review" curse was broken and we didn't have to go the whole meal without refills. Of course, we also had cocktails so we didn't need as much tea and that lowered the number of trips our waiter had to come to our aid.
Overall... great service, great food, beautiful location (probably not on the hottest days) and worth a visit if you're in the area.

What has been your favorite meal this week? Do  you have any fun dining out plans for the weekend? Be sure to share in the comments either on this page or by my blog link on my Facebook page. Hope you have a great weekend! Love and hugs, y'all!