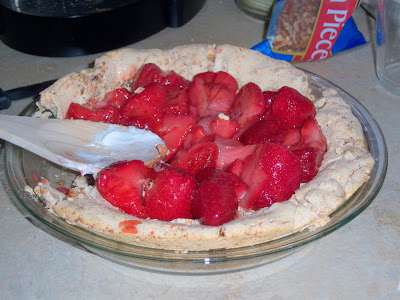 Who says I'm not domestic? I made a pie AND cookies AND sausage balls today! The cookies are no great Martha Stewart-ness on my part... I just bought the premade tube of cookie dough. The greatest accomplishment is not eating the raw dough before it can be transformed into cookies.

The pie is a rather cool deal... and I am rather proud of myself. You may recall that there was a practice pie about two weeks ago and I forgot the baking powder and pecans... today I made the real deal and it is awesome (note missing piece). For those who are interested in attempting the pie... it's relatively simple (meaning, if I can do it, you can do it)... you just crush 20 ritz crackers and mix with 1 tsp baking powder and a 1/2 cup of chopped pecans... butter a pie pan... beat 3 egg whites (separating the eggs is a tad tricky but you probably have one of those handy dandy egg separater things... I just used my hands)... beat the egg whites until they're stiff and then add a cup of sugar and a teaspoon of vanilla. When that's beaten in, fold in the cracker mixture. Bake at 325 for 45 minutes... after it cools... top with strawberries and, if you like, whipped cream! The pie is sort of a meringue and it creates all these nooks and crannies for the strawberries to juice into. It's really yummy!

This morning at church former Georgia Governor and former US Senator Zell Miller spoke. Here's his wikipedia entry for those who aren't well versed in southern politics... http://en.wikipedia.org/wiki/Zell_Miller Basically he was a Democratic Governor and after his term ended he was appointed to replace a Senator who had passed away mid-term. He went to Washington as a Democrat but his conservative values convinced him to convert to Republican. He spoke at the 2004 Republican Convention. I've always followed his career with interest and it was good to meet him. He was at our church to honor State Representative Ben Bridges, who is a member of our church. Ben was a Georgia State Patrol officer prior to his political career and he was assigned to protect Zell Miller. (Ben's greater distinction in life, as he and I later agreed, was that his daughter, Deidre, is my Jamie's teacher at Resurrection Episcopal Preschool.) Mrs. Miller was so sweet... she introduced herself to Austin and we were able to share with her our appreciation for her husband's service to our state and our nation. Zell was also gracious and shared that he was proud to be at our church - as we were proud to have him. I admonished Austin to remember meeting him as Zell Miller played an historic role in the politics of both our state and nation. Regardless of your political affiliation, it is always an honor to meet an elder statesman.

I think I mentioned that Austin was participating in Bible Drill and last week he was given a Bible. I am a little embarassed that he didn't already have one... all my kids HAVE had bibles over the course of their lives but I guess since Austin has never been able, up until now, to sit through church or bible study, I never made sure he had one of his own. Last week he said, "they gave me my own bible... I even got to write my name in it". Awww.... Yesterday when I picked him up he was proud that he had *almost* learned the books of the Old Testament in order (it's pretty tough... there are 39 books!) He even called Jim aka Uncle Bubba on his way home from the retreat to demonstrate his new skills... When we got up this morning Austin said, "I started reading Genesis last night..." "OH?" I have never forced my kids to read the bible. I have and will force Austin to go to church with me as long as he lives with me but I want him to want to seek God. Church attendance is one thing... having a relationship with God and an appreciation for His Word is something else. He said, "yeah... that whole thing with Noah and the Ark is pretty amazing..." and he started quoting facts and figures. Give an Asperger's kid any book and they will know it inside and out in a very short time, if they're interested. He asked if he could read the bible during worship service instead of having to "do all that singing and standing up and stuff". I agreed. I mean... yes, I would love for him to appreciate the worship service itself but so long as he is getting something out of the service and doesn't distract others, I'm ok with it.

While we were waiting in the receiving line to meet Zell Miller, etc, Austin had to recite the books of the Old Testament for Angie to show her he could do it. I'm so relieved he's found some interest in something we're doing at church... because he's GONNA GO either way, it just makes it easier on me if he's enthusiastic about going.

Time for a quick nap... Bible Study at 6pm... then dinner together with the families from Bible Study... and then tomorrow I have to be at work early... I'm tired... need a power nap!

The pie looks great! Can you share the sausage ball recipe too?

You are a great example of reading the word, so if you're interested, he thinks, "why not". Any way you can get him to even read, is great! Don't you love when you're feeling all domestic? No one says it has to be made from scratch, but when a dish comes together, makes it worth it! You probably just need to practice :) Did Ryan finish with his dental work? His pic looks great on your sidebar. Dental problems are the pits...as you know! Take care...