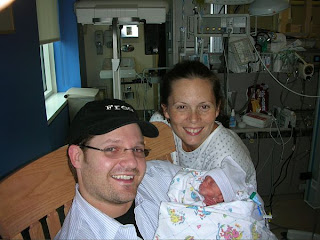 Back in 2002, my dear friend and soul mate, Purple Michael and I directed three shows with the Clayton Alliance for Summer Theatre, aka CAST. CAST was a community theatre program through the Clayton County, Georgia school system. It was a good thing... a very good thing... many people who went through that program have gone on to work in professional theatre. Many relationships were formed that have lasted... the program, in it's purest form, ended in 2004 with the show that Michael and I created for the Fifteenth Anniversary. The program director was one Mrs. Mary Kraack - a theatrical genius and incredible woman who was surrogate mother and BFF to dozens of people. Mary has two sons, Steve (who is married to my high school friend, Mitzi) and Jason, who married Lindsay in 2003 (I think?).

During the summer of 2002 Michael and I worked on three shows: Footloose, Fiddler on the Roof and The Fantastiks. Footloose was comprised of teens and young adults. Fiddler was community wide. The Fantastiks was for people who had come up thru the CAST program and worked in professional theatre. Lindsay (pictured above) was our choreographer for Fiddler (my kids called her the "Dance Nazi"). She was (and is) amazingly talented. She went on the next summer to direct a very challenging production of Les Miserables, student edition. Jason participated in the Fantastiks... and during that time I got to enjoy his humor and talent and charming personality... along with a host of other incredibly amazing people...

You have these relationships in theatre that I refer to as "show relationships" where you meet someone and work side by side with them for hours at a time for days and weeks. You eat together, spend all your waking hours together... your life evolves around the show and with that common goal, you can't help but bond. Because theatre folks are ever evolving and because working actors and tech people are always going from one show to another... and moving on to other show relationships... you have a tendency to lose touch... but the bonds that are formed during those moments of extreme creative vulnerability and fatigue have a tendency to go on. I have dozens of kids that I worked with in theatre that I still communicate with on an almost daily basis via myspace and facebook.

So Lindsay and Jason, for me, are special people, but I had lost touch with them... until I was forwarded an email that showed a picture of their baby girl, Eden Pressley, who was born very premature, weighing 2lbs, 7oz about a month ago. I had been trying to get an update... and finally Jason's dad sent me a link with updated pictures. Eden is doing well... she will probably remain in the hospital for another six weeks or so... but she is growing and gaining weight and looking great! Here are a few pictures I snagged... keep Jason, Lindsay and Eden in your prayers! 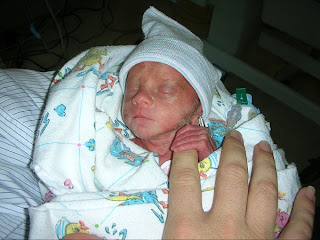 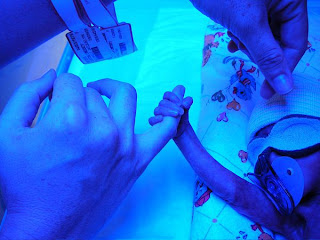 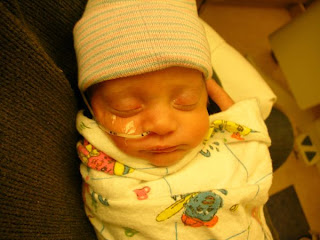 awww she is so tiny! I hope she does well. Linda

Awww, how tiny! Prayers for her continued health, and for the parents!

Awww, my the Lord bless her little soul.

Aww, what a little peanut! I hope all goes well and she continues to grow and thrive.

Congrats on your new bed! I bet you slept like a rock!

Have a safe and fun weekend!
Hugs, Beth

Awwwww so so tiny. wishing them lots of luck and love. Laine xx
x
http://lainey-lainesworld.blogspot.com/