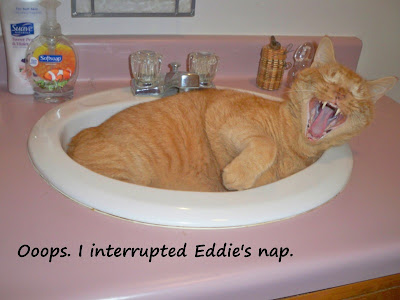 It started raining and the satellite, as usual, went out, so I thought it would be a good time to blog.

So I started downloading the photos from my camera and by the time I finished the boys had come upstairs to find something to eat.

There's some new Xbox thing that they're using and so Logan came over to hang out and play.

He was smart enough to raid his mama's pantry first knowing that they had depleted ours earlier in the week. 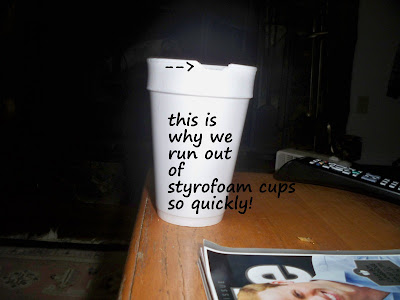 Actually. I probably said something to the effect of "I'm not feeding anyone else until the end of the month".

Not that I'm selfish. Just poor.

I was afraid that the interruption of the kids in the kitchen would make me forget what I wanted to share with you today.

Hopefully not. I know you're all on the edge of your seats to find out the weekend happenings at Casa de Boredom.

The styrofoam cup, by the way, has a bite taken out of it. We buy styrofoam to keep Austin from taking glasses down to his room. He has a habit of chewing the styrofoam afterwards. It's probably not healthy. Anyways. Back to my story. 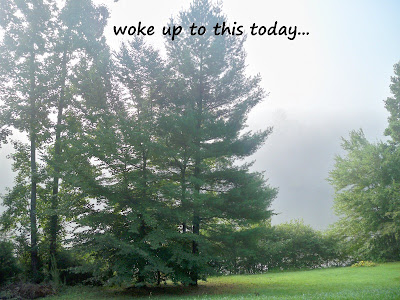 I had one major social fail last night and two epic fails today.

I got a spur of the moment offer for a date last night around 8-ish pm and I bailed. I had already taken my knock out meds and knew I would be zonked before my company could arrive.

Plus. Truth be told. My hair wasn't looking great, I hadn't shaved my legs in three days and I didn't feel like making myself presentable.

I'm not sure if he's mad but he hasn't responded since I declined. I come with a disclaimer, it's not news to anyone that I'm not sociable or spontaneous.

I do want to hang out with three dimensional people, I promise. 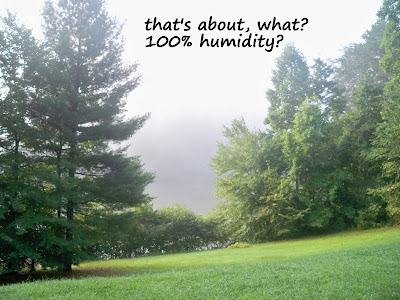 On the other hand... I slept really well last night.

This morning I got up and decided I was SICK to death of the frizzy side braid so I endeavored to dry my hair and style it.

First of all... it was a thousand percent humidity. (see photos of our dense fog this morning)

Second of all... it was already over 80 degrees upstairs when I started.

I dried my hair and realized I was missing both the magic serum that I use to straighten my hair and the flat iron. 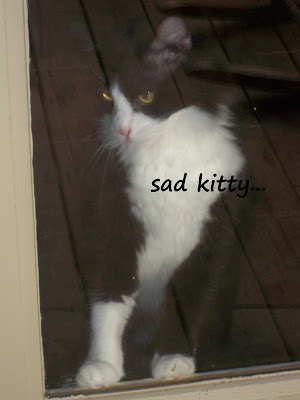 Since I had dried my hair and was in desperate need of heat on that hair... I pulled out the hot rollers.

For the record... hot rollers in 80 degrees plus one thousand percent humidity equals a gallon of sweat.

A gallon of sweat prior to morning nourishment = extreme dizziness and fatigue.

And the end result? Worse than frizzy side braid. Not worth the trouble.

That was Epic Fail number one for the day.

Epic Fail number two was peeling and slicing the cucumbers I picked from the garden last night and... having a big ole worm that I think may have possibly been a maggot climb out and wave at me. 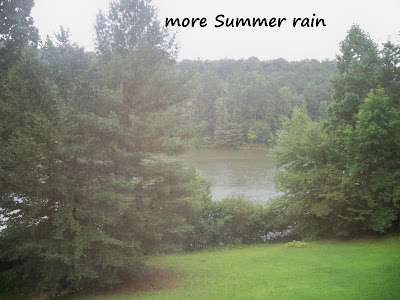 I would have taken a picture but I was too busy freaking out and scrubbing my hands in extreme OCD fashion.

I don't have words to tell you how disgusted I was. Worms. In my food. The NERVE!

At any rate... I made pasta salad from a box and tried to eat it but I'm still sick to my stomach, six hours later.

I've just been eating graham crackers and trying to get it out of my mind.

I napped this afternoon which is something I haven't done in awhile but the trauma of those two epic fails wore me out. 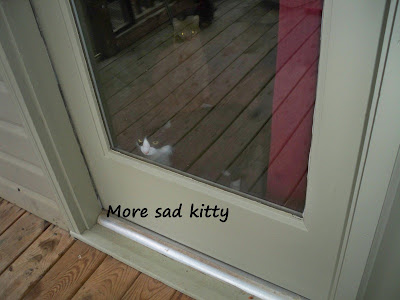 That. Plus there's nothing on tv and I managed to alienate the one human being that wanted to actually spend quality time with me.

Of course... the cats won't let me get two inches away from them.

Little Kitty sits at the door tapping on the glass if I go outside without him.

And to take him I have to hold him up on my shoulder like a baby - which is great unless he gets spooked by something and then it's cat scratch fever for me. 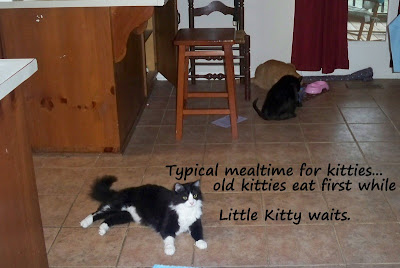 We put more bird feed out so that he could pretend to hunt birds and squirrels so he's having a great time.

My plans for the evening are to hide out in my Whine Cellar and read until bedtime.

That's all I've got for today. Happy Weekend. Hugs.