Guaranteed to always make me cry? Reunions. I'm a hot mess in airports, believe me.

Today a man with a gun walked into an elementary school in the Atlanta area and not one single person was injured. It was a big drama with the local news channel dedicated to the situation all afternoon. I left to go pick up my nieces from school and by the time I got home they had gotten the kids away from the school and to a nearby parking lot to be reunited with their parents.

Cue the waterworks. I mean, seriously... bawling my eyes out.

I don't know what it is. I don't have any separation anxiety. I'm whatever the opposite of helicopter mom is... I've always allowed my kids guilt-free independence. I'm not clingy. I've lost a lot in my life - a lot of stuff - but I haven't lost a lot of people so I don't really have that unresolved issue of loss but ... man... kids and parents reunited after what could have been a very tragic situation... it tears me up.

I'll never forget on 9/11, working near the Atlanta airport ... we were all gathered around a little tv in the office and and the second plane hit. My boss turned around to me and said, "go get your babies". There was something that day about being reunited with my kids that allowed me to feel that life would go on. If they were safe, I could deal with anything else.
I love being in the car with my nieces and hearing their perspective on things. They have been raised in a Godly household - in a very secure family with parents who love each other and who love them. They haven't been exposed to a lot of inappropriate things - violent things. I mentioned to them on the way home that there was a school in Atlanta where a person came in with a gun. I quickly assured them that nobody was hurt but that the children had to be moved away from their classrooms. I asked them if their school had told them what to do in that situation. To my surprise, thankfully, they have, just four days into the school year, already been told what to do in that very situation. They are very clear on what would happen down to what corner of the classroom to go to. They even knew exactly where they would be taken if they had to be taken away from the school property - a nearby church.

I have to say that I also very much love that when I pull the car up in the carpool lane to tell the teacher with the walkie talkie who I'm there to pick up, I don't have to say their last name. I love that they live in a community where they are known. I just said, "Sarabeth and Jamie... " and before I got the last name out she was on the horn asking for the Gant girls. It's a good thing.

It's not that bad things don't happen here. There is crime here. Less crime than in a big city but it does happen. People know people here and so it's harder, I think, to do bad things to people you know. 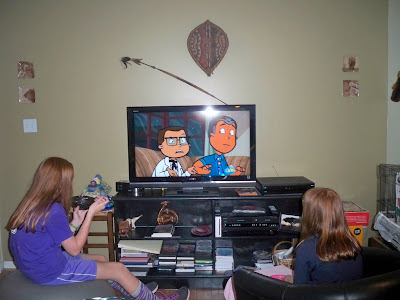 Watching them after school is really easy. They make their own snacks and watch Word Girl on PBS while I play sudoku on my nook. They do their homework in the car on the way home - or at least start it. And it's good for me to get out of the house.

By the way... their snacks today? SB had black beans that she heated up for herself on the stove. J had poptarts. There's no doubt they're my girls.

I have a bit of a headache today. It's more than a little bit. I have a horrible headache. It didn't really start until I was on the way home from my niece-sitting duty so the timing was good. I spent a lot of time today trying to get water out of the basement and I think the mold is getting to me a bit. Either that or it's just one of those random headaches. Happens all the time.

Maybe this will be an early bed time. I didn't sleep great last night - was awake for about two hours in the middle of the night and hit the ground running this morning to go get the wet vac so we could try to salvage the carpet. I'd show some pictures but I don't feel like walking downstairs and back up to do it. I haven't seen Austin since I got back home. I don't know if he's here sleeping - he stayed up all night - or if he went off with his buddy again. Either way... the fish I was planning on cooking for dinner isn't getting cooked if it's up to me to do it.

That's all I've got today. Hug your kids.

You probably know this on some level, but, you really need to get that carpet and padding out of there. We flooded during Katrina, like thousands of others. We were warned from the first day to get the wet stuff out. It is virtually impossible to salvage the carpet, and totally impossible to dry it out in place. Black mold will soon start to grow and it can be deadly. If the sheetrock is wet, black mold will grow up the walls as well as on the inside of the wall surface. This situation is particularly dangerous for anyone with compromised health and respiratory system.