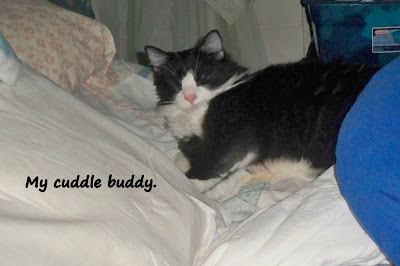 I had a burst of energy/semi-painless day. Painless as in "less pain" not as in "free from pain". But it was manageable enough for me to do three loads of clothes (mine, Austin's and towels), empty the dishwasher, take out the trash (because Austin didn't) and pick basil so I could make another big batch of panzanella since the first batch was a hit. It felt incredibly productive even though I know most people do that much plus work a full day. That was the most I had done in a long time. Of course, as per usual, the pain came right back with full force but the good news is that today is the first day this week that I've had to take the hardcore pain meds and THAT is a good week, no matter what else happens. 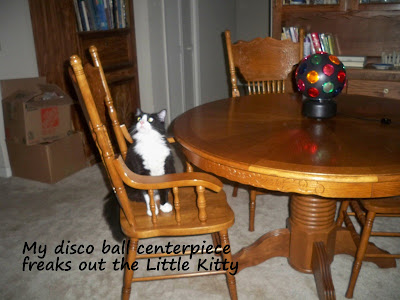 We had a really hard rain for what seemed like hours today. Not sure if there are any new/renewed leaks in the basement. I haven't heard a peep out of Austin since lunch and I haven't gone downstairs. On one hand I think I should probably go down and check on him but on the other hand, he can sleep for 15 hours straight so why bother? If I don't see him before I go to bed I'll check for signs of life. He's been less than cooperative this week in full on rebellion to not having Mawmaw around to keep him honest. I had it out with him yesterday and gave him a *nugget of wisdom* that if you do the things that are expected of you without having to be reminded, you don't get reminders. It's really very simple. If you want to be treated like an adult ACT like an adult. It's a process. Ultimately he still has the same syndrome he's had for his whole life and he's never going to have internal motivation. All teenagers struggle with that transition to adulthood and we would be foolish to think his would be easier. It's frustrating but... at least he's not off somewhere breaking laws or racking up credit card bills or doing something else destructive to his long term well-being like creating offspring. 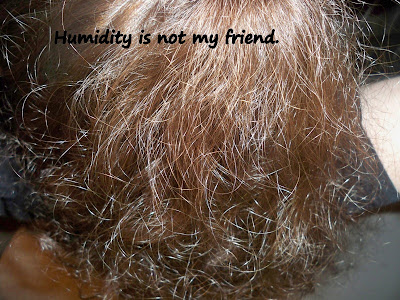 In happy news... the trash finally got picked up. They missed last week due to  problems with their truck. I'm not sure what happened. When I used them at the apartment they had a real trash truck. Here they pick it up in a 20 year old pickup truck. I don't know if that's because they have to go down our driveway (which, admittedly, is steep) or because they've retired the "real" truck or maybe use it for bigger subdivisions. I sent a WTHeck email at 5:15 this afternoon when they had not yet come and they showed up a few minutes before 6. I don't know if they were already planning to come or if my email "encouraged" them but... this is one of the downsides of living in the sticks. You don't have the reliability that you might in a larger town where you either have a municipality with a contract that has to be honored or have more companies to choose from, i.e. competition.

I noticed yesterday that there was a high school age girl dropped off by the school bus at the Nudist Resort. I was like.. ick. I asked Austin if that would be weird for him if he had a friend living there. He said he did know one kid in high school that lived there but he never asked him about it. Maybe I'm just not "evolved" enough but I just don't think adults and teens or children should see each other naked. That is just 50 Shades of Cray-cray to me.

I also noticed a kid walking down our road with a backpack this afternoon so apparently we have a school age kid in the neighborhood. I had never noticed before. There's a girl who sometimes walks with someone who appears to be a grandparent and occasionally there's activity at the dock directly across the lake from us but mostly... it's just us and the squirrels. I seriously doubt there's more than a dozen cars that pass by each day and we're at the beginning of the subdivision. We're way off the beaten path.

I splurged and bought a full price book on my Nook last night. It's Alfie Boe's biography. Seriously. I'm crushing badly. It's only a small way in part because he looks a lot like the previously mentioned but not really discussed former flame who is newly single again. Even though former flame knows that I'm dead set against any serious relationship, I am not opposed to seeing him. I mean, good Lord knows I need to get out and it will take someone who has known me for a long time to know that there's more under the hood than what you can tell from my speed lately. At the end of the day he's one of those friends where we can pick up right where we left off. He has been around for a lot of the pivotal moments of my life. I was babysitting his son on the day that they televised Princess Diana's funeral... bawling my eyes out like the Brit-wit that I am and the kid looks at me and says, "did you KNOW her?" HIL-arious! We have a lot of those kind of moments. On the other hand, my Alfie attraction is much like my Tim Tebow attraction - it's not really lusting, it's just that he's so cute I'd like to put him on my shelf to take down and cuddle occasionally. I just wanna hug him and squeeze him. However, my Alfie attraction is strong enough that I messaged my friend Beth who lives in London and hobnobs with the Rich and Famous (Girlfriend met Prince Edward and Sophie a few weeks ago - she really travels in some hot circles!) and let her know that I was counting on her to pass along the news to Alfie that I absolutely adore him and to get me a few good photos of him. She is a good enough friend that she didn't call the men in white suits after me.

An update on Kelby - the missing nephew of my friend - they were able to use the suggestion that my Finder of Lost Things gave me and some other tips they had and find him. Find him but not catch him. He ran. And my friend, who is the kind of aunt I am, ran after him but he was too fast. The local police took over two hours to arrive and... he was gone. At the very least they got confirmation that he was not yet harmed and had left under his own free will. It's by no means a situation that has been resolved but they do feel better about things. 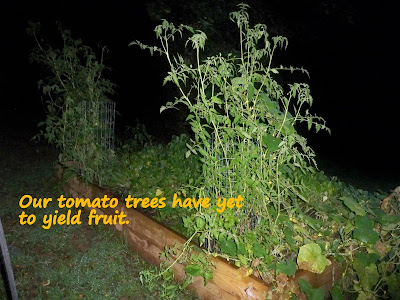 I had a moment of pure shame yesterday while buying tomatoes at the grocery store. There's just some unwritten rule that Southern women who live in the country should not have to purchase tomatoes in the Summer. Our tomato plants are tall enough to cast shade and still have yet to bear fruit. The cucumbers are growing well but I got scared off by a bunch of wasps yesterday. I scare easy. Austin promised to pick them for me. It's on his list of unaccomplished tasks.

And now... it's time to watch football. Bring on the fall! Happy end of week, y'all!