Chai tea and Corn Chex to start my Wednesday.

Up at exactly 7:41 for the third day in a row. My body clock has been reset.

Stayed upstairs until Late-thirty to watch two episodes of Who Do You Think You Are? which were both very entertaining and kinda creepy in that the product placement of ancestry.com is over the top that it feels like a one hour infomercial. I'd like to see a genealogy show that demonstrates something more than what I already know how to do. That's just me.

I went straight from the recliner in the Living Room to the bed, which is unusual. Usually I spend a period of time on the loveseat turn chaise lounge in my Living/Dining area of the Whine Cellar. This is where I usually blog so that was the reason for the absence of a blog yesterday.

Trust me when I say that you didn't miss much.

I miss having a tv in my personal space but I will also say that it's been good for me to unplug for a little bit every day. I think I'm sleeping better without a tv in my bedroom and I NEVER thought I'd say that.
I even left my laptop upstairs which NEVER happens. I must have it close in case I have a thought that must be pursued via internet. I do have internet capability on my Nook but it's harder for me to type on, especially if I'm sleepy but it will do in a pinch.

I just played a few rounds of sudoku and fell asleep.

We didn't have the invasion of the Ginger Cat that we had the night before. Ginger Cat realized that Little Kitty was getting his own private water bowl and treat turn-down service in my room and wanted to hone in on that action. I woke up in the middle of the night to the less-graceful-than-Little Kitty big ole kangaroo looking Ginger Cat on my nightstand about to knock over my drink, the lamp and the little Wicked snowglobe that I assume is highly frag-eeee-lay.

I told him to get down and... sad for Little Kitty... moved the water bowl and treat service to the floor like a floor cat not my precious all-access kitty. Little Kitty was obviously offended but still ate the treats. He still assumed his position as bed hog as usual.

Can we agree that Seinfeld has nothing on me? I can take a nothing day and suddenly make it all seem worthwhile... I know... that's mixing one show with another. It just fit.

Austin's homeys were evicted from the Big Mama house yesterday. The first night they were oooh such great guests and cleaned up after themselves, etc. The second day they wiped out about five meals worth of food from my pantry. I don't get more stamps until the 23rd. Austin's out until the 17th which means any gaps in the pantry will be filled by my sadly dwindling nest egg. On one hand I want to be kind and share of my little loaves and fishes. On the other hand... get a job and get yer own durn loaves and fishes. I'm spread thin enough as it is! Yesterday morning I told Austin, "party's over unless we get a cover charge".

Midday the only one of the Three Amigos that is gainfully employed stopped by after working the morning shift at wherever he works and picked up Austin to go cut grass for cash with him. Despite being slightly miffed at his enthusiasm for taking care of someone else's yard... I was glad that he was motivated to do something other than play xbox. At ten-ish pm Austin was still not home so I called his cell and it went straight to voicemail. GREAT. I thought. I have to stay awake and worry about my little "I'm not missing - I always know where I am" drifter. He came in not much later, though.

He came home in time to dig into the two salads I made yesterday - panzanella (think caprese salad with lightly toasted seasoned french bread homemade croutons) and tabouli. He enjoyed a hearty serving of both .. essentially finished off the panzanella... so... eh... I would have loved to have another huge bowl of panzanella this morning but I'll settle for the knowledge that my child had something other than frozen pizza for once. Today's menu: frozen pizza.

It's raining hard. I went with shorts today instead of my usual skirt or maxi dress. Still rocking the same tired side braid that has been my go-to style all summer. Mastering the fish braid nicely, I think. I have some kind of eye infection where my eyelid is itchy and swollen (lovely, right?) so I skipped the glam routine today. I won't be leaving the house unless we run out of ice cream. 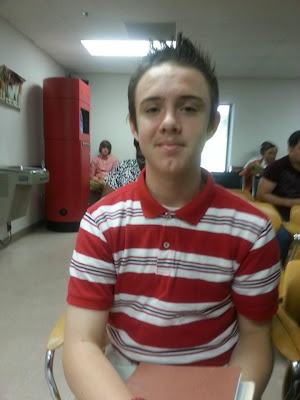 On a more serious note, my friend's nephew is still missing. Because he left from a group home and is considered a runaway the police will not assist in locating him. The media hasn't followed it. Other than our little Facebook campaign, the family has nothing they can do to find this young man. I think there will be an effort to pass out flyers this weekend. Some ladies I know from church work with a ministry trying to rescue children from the sex trade. This is how kids end up in that position, not to think that this has happened already to Kelby but this is the pattern. Kids runaway and nobody with any real resource tries to look for them. How can we, as a society, let a 14 year old go missing and not care enough to look? It breaks my heart. I have a friend who has a skill of being able to know where missing things are. I know it sounds hocus pocus but it's worked in very uncanny ways in the past. I asked him and... he gave us some good clues. The family - so desperate - have asked me to go back and see what else he can see but from experience I know that what he sees in that first flash is the best information and anything we press him to see may not be as accurate. The Atlanta area is huge and with this boy missing since Saturday, he could be anywhere. Or nowhere. Dekalb County police told the family "we don't have time for runaways". Thank God we know that Our Shepherd goes after every lost lamb. Would you join with us in looking for Kelby? The power of the internet is huge. Post his picture. Get his face out there. You can use the information below. He was last seen in Dekalb County, Georgia.

This is Kelby Fair he has been missing since Saturday. He left the ABBA House in Stone Mountain, with another resident by the name Jawon Jones AKA Juju. He was last seen at the Polo Club Apartments in Dekalb County on Ashley CT. Please help us find Kelby his family loves him and misses him. Please help bring Kelby home. Any information please call 678-982-2180


Thanks and have a great day, y'all.