Although I make an effort to avoid the mainstream news (because my blood pressure is already too high), current events do find their way to my social media platforms. I also read the Daily Mail even though it's a rather amateurish publication... it suits my taste without being slanted either liberal or conservative, at least as far as American politics are concerned. I thought today would be a good day to talk about some of the things that are happening in the world right now.

The Thai soccer team trapped in the cave... I only fully became aware of this situation on Saturday and it's a good thing because I'm such an empath that I would have been worried SICK knowing these kids were missing and then found but in a place where rescue is difficult. Those poor boys! Their poor moms! What was so crazy to me was that as the kids were rescued they weren't telling the parents which ones had come out... and the 12 sets of parents agreed to wait at the mouth of the cave until all the children had been brought out. While I appreciate the concept of solidarity and community... if my kid has been lost in a cave for so many days, I'm going to be stuck to him like glue for as long as he will tolerate it. There was, I understand, some fear of infection that was keeping doctors from allowing the parents close to their children. I call bs on that. Gown that mama up and let her hug her baby! At any rate, I'm relieved to know they're all out. I think caves really bother me because I'm claustrophobic and the idea of being stuck there... yikes. 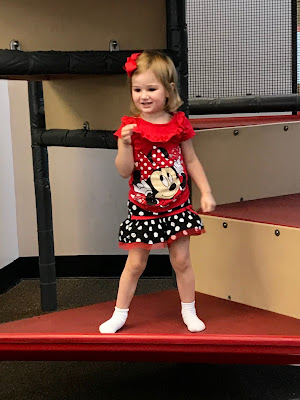 I see that Prince Louis was christened yesterday. What lovely photo ops of the Royal Family although I was a bit put off that the Queen couldn't make it due to her busy schedule. They've basically had a year to plan for the Christening... nine months of pregnancy and the three months since he's been born... they couldn't find a date and place that would work with her schedule? She's the Queen, after all. She can do whatever she pleases. At least that's how I see it. Maybe it's not that big of a deal too Will and Kate but I'd surely be miffed.

Also, side note, I feel like the dress Megan wore to the Christening was also a bad fit for her, just like her wedding gown. She's buying really expensive clothes, she needs to spring for the extra cost of having them tailored to fit her shape. Also, side note to the side note, aren't most clothes constructed for a super model anyways? Seems like she could buy off the rack and have a better chance of something fitting than I would. I'm just saying. The clothes are wearing her instead of her wearing the clothes... says Heather, in her ten dollar Walmart dress.

Hollywood Icon Tab Hunter has died at the age of 86. I remember him most from the movie musical, Damn Yankees (a classic, if you ask me!). He wrote down a lot of Hollywood's dirty little secrets in his 2005 book, Tab Hunter Confidential. I think I have read it before but I'm eager to read it again. Actually, I am almost definite I checked that book out of our local library. He died of heart failure. 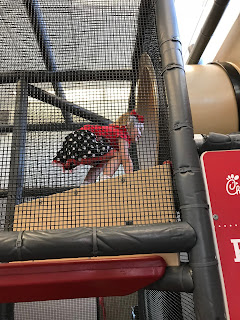 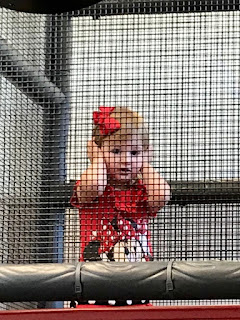 Today I picked Cosy up early, early and we went to Dunkin' Donuts to grab breakfast. On the way to DD she had a complete meltdown because we didn't bring Whiskers, her kitten. I finally got her to chill when I reminded her that there is a snake at my house and we didn't want Whiskers to become a snake snack. We got to DD and she played this little game she loves where she dashes from one car door to the other. When I open it to get her out, she climbs away from me. I end up looking like an idiot running from one door to the other. My back was already killing me but stretching to grab one little lady leg and pull her close enough to get her out of the car really did me in. I ended up having to spank her to get her to cut it out... which breaks my Nana heart but... also, I'm not a fan of games in a car or a parking lot and am trying to teach her that those situations are all business. I carried her into the DD because I forgot to get shoes for her and then juggled her, two drinks, donuts and a bagel on the way out because she was barefoot. So my back was screwed in the first thirty minutes of the day. 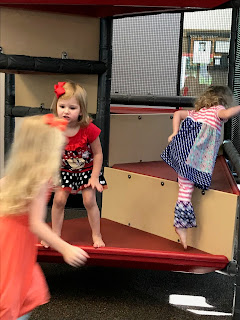 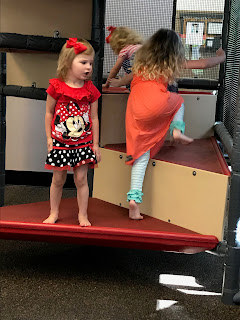 Fortunately when we got to the house she was much more cooperative but then it's carry all the things... climb up the stairs... breakfast in bed for us ladies... then back down the stairs with a load of laundry which I needed to start before Austin got up. At least I got some encouragement from Cosy as I was carrying the basket down, "You're so strong, Nana!". You just have to laugh. She loves doing laundry with me, especially because she can see inside the washing machine (the lid is clear). Then I got out the bug zapper and started killing moths and she got tickled. She said, "here little buddy... Nana's gonna fry you like an egg!". Not sure where she heard that but... teehee... it's much funnier when she says it in her sweet little girl voice than it is when I say it. Then we were back up the stairs for Nana to shower and do makeup. 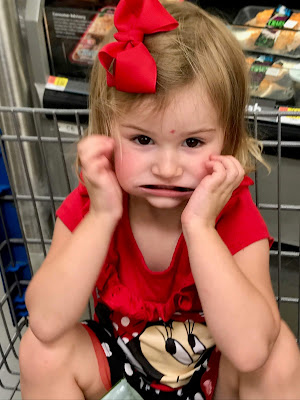 I was dangling the prize of a playground visit to help motivate her today and it worked wonderfully! I had thought of taking her to the little playground by our local fire station but by the time we were all ready to go it was already too warm outside so we went to the Chick-fil-a instead. She amazed me at the playground by introducing herself to two little girls there. She said, "I'm called Cosy, what's your name?" ... which is the first time I've seen her do that. She played well with the older girl but the younger girl was a shover/kicker so Cosy gave her a wide berth. They were also both screamers and Cosy covered her ears while saying, "Calm down!". I agree! There's no sense of all that squealing in a confined space. It was a big day for my little introvert, though and I'm proud of her for making nice with others.

Then we had several more errands to run... pharmacy, Walmart, bank, gas station, Jessi's work... by the time we got Cosy home and I got back home and got stuff put away I was completely wiped out. I took a quick little nap and although I'm still in a stupid amount of pain, I don't feel as fatigued as I was earlier. I'm hoping Marvin doesn't have any exciting adventures planned for tonight because I'm not at my best. Maybe just dinner and an early bedtime for the win! I'm just so determined to keep our usual Tuesday night date because when I start allowing myself to make things optional, I end up never doing them. If I wait until I feel like doing things I'd never leave the house. Anyways... hope you're having a great Tuesday. What's new in your life? Love and hugs! 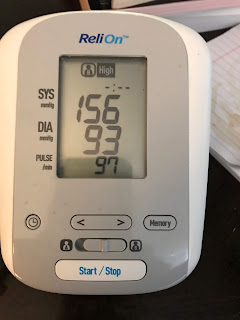 Oh she will be able to take of herself! LOL Love the face! She's a hot ticket. LOL

I can not wait for fall time! Although we have a pool to soak in when we want, it gets old . And taking care of an almost 4 yr old in it is trying on this Nani. She is a love but has one heck of a temper! A spit fire for sure. lol