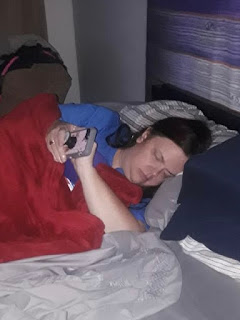 Welcome to another Throwback Thursday on my blog. It's the day when I look back over this day in my blog history and some clips from this date in years past. Last week there weren't many entries from that day so I skipped it. I'm hoping this week will hold a little more meat, metaphorically speaking. Remember you can click on the underlined link for each day to see the original post.

Not EXACTLY on this day but on July 20, 2015, I posted about how much I was loving my iPhone 6. For those of you who sort of glazed over when I listed the apps I use on my current phone, the iPhone 7, this review of my favorite things on my iPhone 6 might be helpful for you! Most of what I know about how to use my phone I learned either off a YouTube video, from my sons or from Marvin. But Marvin doesn't use an iPhone so he's basically just shared some cool apps with me. I'm so attached to my phone that I fell asleep holding it last week. Marvin took this picture... and oddly enough, I took a picture of my own around the same time. Basically... you can have my phone when you pry it out of my cold, dead fingers. I'm even attempting to swipe something... 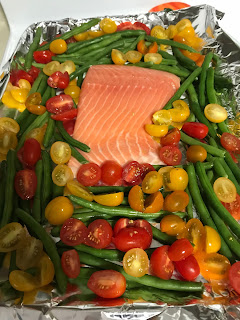 Well, apparently I wasn't feeling bloggy on this date in 2014 either but I have a pretty fun question and answer blog on the 20th.  You can check it out here.... and answer any of the questions you'd like to answer yourself down in the comments below or on my Facebook blog post link. The questions were: 1. What's your favorite thing to watch on YouTube 2. Who taught you how to drive 3. What's your favorite thing to cook 4. Are you a hugger or non-hugger 5. Where do you pray best and 6. When's the last time you talked to your grandparents? I think I'm still about the same on all of these. My favorite thing to cook may have slightly changed to this roasted salmon/green beans/tomatoes ... just because it's easier/faster to cook. Just put it all on a baking sheet, drizzle with olive oil, season how you like and bake it at 425 for about 20-30 minutes. I like for the green beans to sort of crisp.

Would you believe that there also was no post for this date in 2013? Once again I'm going with a post from the next day, July 20th, which turned out to be an eventful day with a lot of photos. On that day we were moving some things into the mountain house and I took a lot of pictures of how things looked at that time. It makes me homesick for .... well, for the way my basement looked before the water damage and for my mom's presence in the house. It's just not the same without her. I miss our adventures that we had during the first year living up here while Pop was still in Riverdale and mom and I would have to sort things out on our own. We did a pretty good job and managed not to kill ourselves or each other. I didn't know then that we only had a few more Summers together. We were merging stuff from my house with stuff from Grandma's house after we moved her to Assisted Living and of course, things were trickling in from mom and dad's house in Riverdale. It was such a hodgepodge of stuff.

Also no blog post on this day in 2012 so for that year I'm pulling from July 18 to throw back to... at that time I had settled in with my parents in Riverdale (temporarily before we bought the house back up here in Cleveland) and was sort of getting into a routine. I talk about what Austin is doing/not-doing at that point... whew!... I am so glad that season of life with him is over. We still have challenges, almost every day but he's grown to be so much more dependable, stable, cooperative, grateful... many things... that he wasn't at that time. You can click this link right here to see the entire blog post.

Let's see what was happening in 2011... ONCE AGAIN there was no post for July 19th but again... on the 20th... I was talking about my move to the apartment after our duplex got struck by lightning. For three years in a row - 2011, 2012 and 2013 I was dealing with moving on July 20th. So no matter what else is happening on this day this year I am just happy to be settled. I miss my basement for sure, but I'm really, truly, very happy in my Ivory Tower in the guest room on the top floor. It's been a positive change for me and gives me a little more privacy which is an absolute necessity for an introvert.

HEYYYYY! Finally a blog post from July 19th.. this one was in 2010. It was sort of a whiny, "depression session" post talking about how lonely I felt in church as a single woman. It was only about six months later when my back problem reared it's ugly head and I stopped being able to sit for long enough to get through church, especially while I was still working full time. It took every second of my time off to get the inflammation down enough for me to function and... I still hurt constantly.

One last post for this Throwback Thursday and once again, it's not from this date but from the 20th. It had been a really sweet day because Sarabeth had gone forward and joined the church. It was a huge thing because SB was such a shy little girl! She's grown into quite the confident young woman since then and is active in lots of things that bring her joy, such as playing the drums for her high school band. She is still a quiet girl but she is a quiet leader and I know a lot of folks admire her grace and spirituality.

So that's my throwback to the days around this day in my blog history. Why is this day special for you? Share in the comments below! Thanks for stopping by!