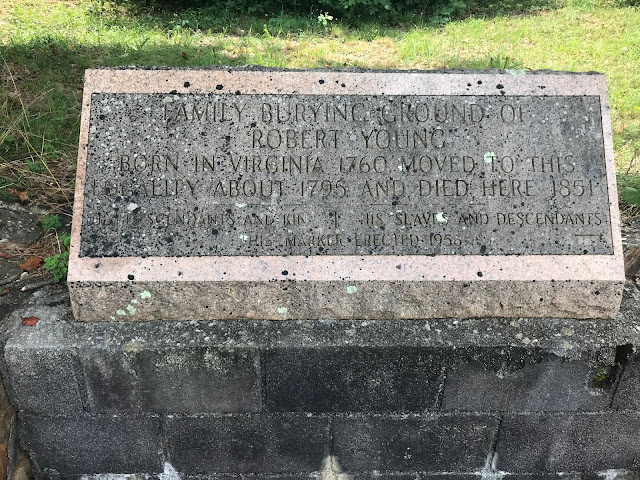 On the 4th of July, after we had lunch at Moonie's BBQ, Marvin and I stopped at an old cemetery across from the Falcons Complex (where the Atlanta Falcons NFL team trains) in Flowery Branch, Georgia. Being a genealogy and history enthusiast, cemeteries are always interesting to me. I had mentioned to Marvin that I'd like to wander through some of the ones in his area and so this is one he stopped at on the 4th. This one is close to the road, shaded and is small enough to cover the whole thing quickly. It was divided into two sections - one with ornate, well marked stones and another with simple, unmarked graves. We found a marker that indicated that one side was the Robert Young family and their kin and the other side was his slaves and their kin. I found a newspaper article from 2011 that explained that there were also some Native Americans buried in the slave portion of this cemetery. 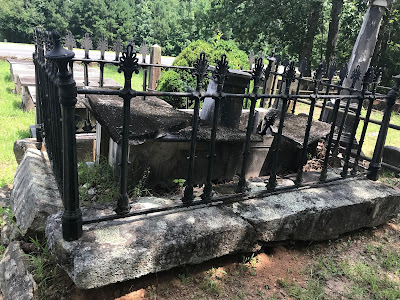 Robert Young and his wife Selia Strickland Young were born in Virginia in the mid 1700's and moved to Georgia around 1795. They settled in the Hall County area (near what is now Lake Lanier). They had around a dozen children. Some died very young and there are many tiny graves in the family cemetery. Their son Robert married Martha Louisa Winn. There are several Winn family graves there as well with a marker noting that they were moved to this area when the Buford Dam was built to create Lake Lanier (around 1956).

I did a little research on ancestry.com for this family. I had hoped to find some addresses on census records to help correlate this family with actual locations in and around Hall County. Obviously, the cemetery would have been on what I presume to be a family homestead but as far as other locations in the area, I haven't found much. I don't want to spend a ton of time on it because... I still have years and years of research to do on my own family but so far I haven't found any addresses listed in the census records. 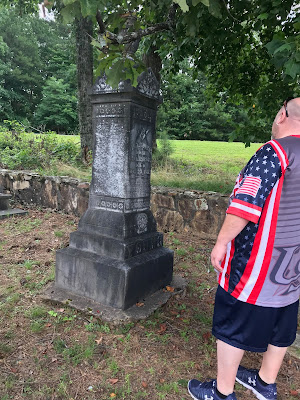 That's the thing about census records... sometimes they are an amazing wealth of information and sometimes they're blah. It is as varied as the number of people who performed the census searches over the years. I know that the few times I have responded to census requests I have been sort of aggravated by the intrusion BUT... as an amateur genealogist, I realize how important this record can be to future generations. Currently census records through 1940 are available online so it's possible to know far more about your great-great grandparents than your grandparents sometimes.

Up until 1840 the US Census just took a count of household members, not necessarily the names of individual members. So you may be able to see how many household members were literate, for instance... or how many slaves in a household (which never fails to make me cringe)... but you might not know exactly who lived there. Later records list the names of everyone in the household which shows us a lot about how families took care of each other back before welfare and social security. You will see elderly family members and sometimes young couples living with middle aged couples. 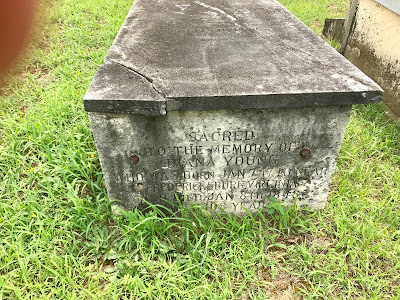 I think we've lost a lot by separating ourselves into individual households. Certainly if I didn't live with my dad, my granddaughter wouldn't know her great-grandfather as well as she does. Multi-generational households introduce their own set of problems, no doubt, but I think it's a great system for connecting family members who might otherwise feel isolated. Austin needs the financial support my dad and I can give... and the help parenting his little girl... but we need his physical strength and ability. Hopefully there's enough give and take to even it out for everyone. I just know that it cracks me up that Cosy gets excited whenever she hears Pop come in the door... and that she felt perfectly well at home enough to get out some of my mom's fine china out of the china cabinet to eat her pancakes on yesterday. I wish we were close enough geographically to give her that kind of familiarity with all of her extended family. 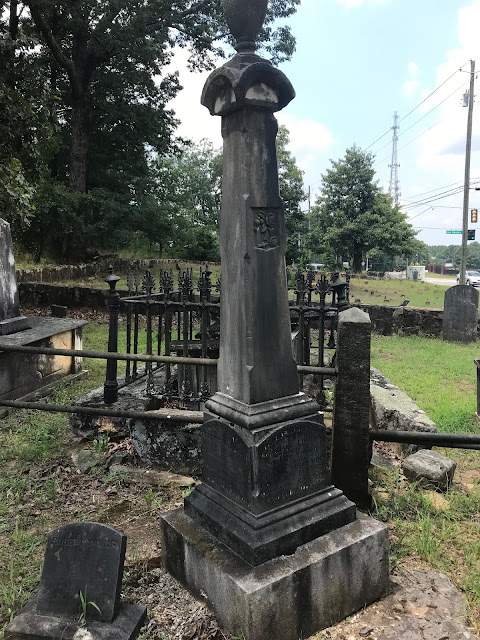 At any rate... I did find a nice write up about the Robert Young family on Genealogy.com and I thought I'd share it here, if you're interested. Hope you're having a great Sunday! Love and hugs!