All The Things You Missed / Photo Dump 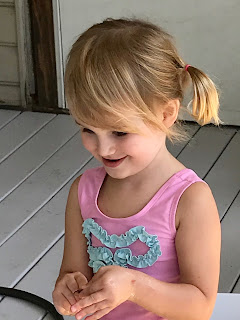 When we last left this story, I was tucked away at Marvin's enjoying our time together and planning another luxurious day with him including spa night and then... Tasha had to have an emergency appendectomy. Here's how my Nana brain works: Mama is in the hospital, Grandma and Papa are with Mama that leaves Daddy and ... Daddy's team to take care of baby girl. While I know that Austin is a good dad, I know his patience has a limit and I knew that when they dropped Cosy off, she was a little out of sorts about what was going on with mommy. So I cut my time with Marvin short and went back to help with Cosy. It ended up being a good thing because she got really emotional at bedtime and needed lots of Nana cuddles to settle down. 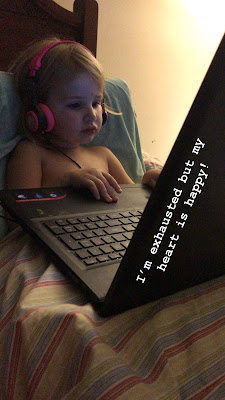 Have you slept with a three year old? I can't understand how someone so small can take up so much space! She did finally go to sleep and I finally got some sleep but it wasn't my normal rest and it certainly wasn't a night at Marvin's. Then Friday morning I had a doctor's appointment in Gainesville and of course, everyone else has to work so it was just me and my chickadee (gosh, she really hates it when I call her that... I can call her anything else - Princess, Monkey, etc... but if I call her "chickadee" she says, "I'm called Cosy"). My back is still not good and I'm trying so hard not to pick her up but sometimes when she's doing things in her own time, it's easier to just pick her up and move her rather than trying to convince her to move herself. I had several errands to run Friday and eventually mom was released from the hospital (she's fine) and Grandma came to pick up Cosy. I was absolutely wiped out and just rested the rest of Friday.

Then Saturday Oliver and Cody were coming up so I wanted to have Cosy come over. It's a lot of work, especially when I'm tired, to wrangle two three year olds. I mean, Cody is always there but I'm not a sit in a rocking chair and observe kind of Nana. I'm down on the floor with them, up and down the stairs with them, jumping on the bed... ok, I don't really jump on the bed. It is really important to me that Oliver and Cosy have a close bond. They may very well both end up as only children so it's important to me that they have each other. They definitely are thick as thieves when they're together... it requires a little refereeing with them from time to time but they definitely love each other.

Backing up a bit in time... on Thursday night Oliver Facetimed while Cosy was with me and she just took over my phone and carried on her own little conversation with him, showing him the dog and the cat and toys and chatting away to him... giggling at how silly he is... it was the most complete conversation the two of them have ever had and it just melted my Nana heart into a little puddle. This is what I'm after with them! So although I was way too tired Saturday, I wanted Cosy and Oliver to be able to spend time together so I rallied. Tasha's parents had a church thing to do that was easier to do without Cosy anyways so it just made sense for her to hang out with me. BUT MAN... when everyone went home, I crashed so hard! Austin's girlfriend Jessi hung out with me for a little while and then I said, "I'm really going to need a nap... " and she went and took one too, I think. 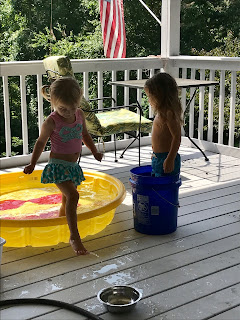 So basically what I'm saying is that I've just been either ON DUTY or RECOVERING continuously since my last blog post. I'm also on a new kind of muscle relaxer and it's making me feel really doped up. The other one made me sleepy but I was used to it and at the very least, it worked great. They just needed to increase the dosage of the one I was on and it requires a lot of documentation because it's strong stuff - usually given with things like muscular dystrophy and other muscle wasting kind of disorders. That's how bad my muscle spasms are... anyways... we needed more documentation for the insurance to cover it so they have me on a different kind in the meantime and... I just don't know that it's going to work. I feel drugged up and it doesn't work as well.

And my blood pressure is still high. Today it's 165/105 and I feel horrible from it. I have an appointment for a follow up in three weeks. I can call in the meantime and they'll probably do what they did when I called a few weeks ago - adjust medication - but I really just need a good sit down with the doctor and a discussion on the next level of intervention because what we're doing isn't working. The thing is... as long as it's hot outside, I don't care to do anything that involves leaving my air-conditioned space.

Marvin and I did have a nice lunch date on Thursday before I came back home. We went out for Italian at this place called Biba's near his house. I had the chicken parmesan... he had some kind of chicken pasta special and we had fried calamari. Other than that I'm eating healthy (ha!). It was enough food that it fed me for lunch that day, Austin and Jessi for dinner that night and me for dinner the next night. I'm picking our big adventure lunch date for next week and I have NO IDEA what I want to do. So Atlanta area folks, give me some suggestions for a fun lunch date restaurant that you might like to have me review for you next week. 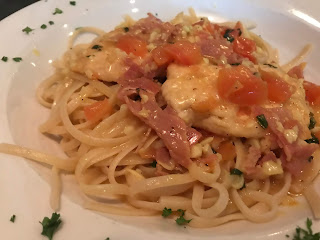 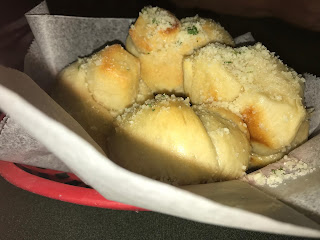 In other news... Pop is doing the show Sweet Charity in Habersham County and I think he's having fun. He's had a bad cough/cold over the past week that has really sidelined him. I've been trying to get him to go get an antibiotic and he's been... totally ignoring me. Even Cosy, when she heard him coughing early on Friday morning said, "Awww... Pop will be ok...". Bless her sweet little heart... when the nurse at my doctor's office told her Friday morning, "I hope your mommy feels better soon... " Cosy just looked at her and shook her head and said, "Poor Mommy...." she's such a little mother.


And... I think that's it. I'm going to include some photos and leave it here for now. I'm not trying to be a bad blogger... I'm just too tired for intelligent thought. Hope you've had a great weekend! Love and hugs!

I don't think your a bad blogger, just a busy one!

The kids are so cute and getting so big! Amazing on how fast time goes by....