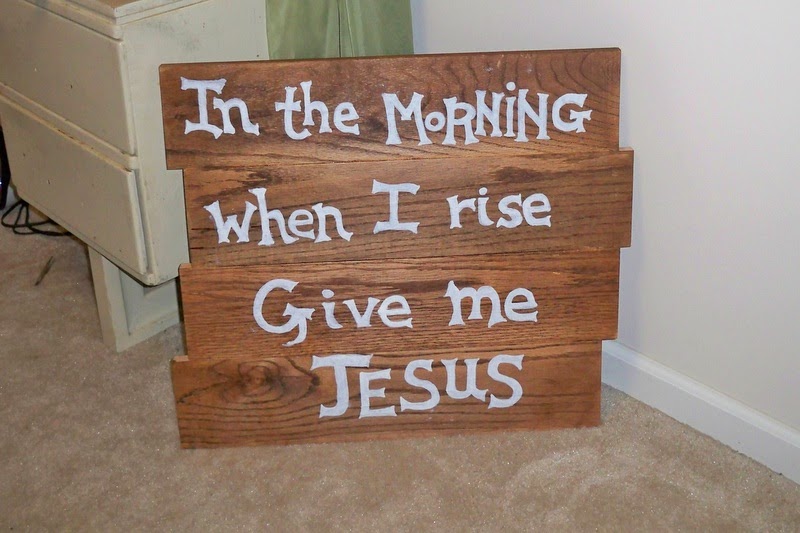 I made this! Ok... really, Austin stained the boards and my brother helped him attached them with some nifty woodworking tool he has and I just did the lettering but y'all, the lettering was hard. The words are from a song that has always been particularly calming for me. The idea came from something I saw on Pinterest. It's now hanging on my bedroom wall so that when I wake up in the morning and EVERYTHING hurts and it's tempting to start the day feeling sorry for myself... this will remind me that I can do this. I can get up every day and be grateful for what I have and not worry so much about what I'm missing. I used Sharpie paint pens for the lettering, btw. They work on wood and fabric and... pretty much anything... I can see myself using them for making Christmas ornaments and... whatever other craft projects I find inspiration to endeavor. I'm the girl who goes to craft fairs and doesn't buy a thing because I think, "I could do that"... and I never do.

Anyways. This morning started out rough with Lily the old lady dog (who is still alive - a full year after her thyroid cancer diagnosis) breathing in my ear at 7:30. She squeezed past the gate blocking the top of the stairs and came down looking for... what I don't know. Fortunately my mom was awake and instead of walking Lily around outside like I've had to do several times before,  I was able to open the back door and tell her to "go find Mawmaw" and holler upstairs for my mom to let her in. I intended to just go ahead and start my day but when I sat down on the bed to figure out what to wear I ended up laying down and falling back asleep. Just another hour but it helped. I had about a fifteen minute nap this afternoon but honestly, I want to sleep about 24 hours straight. It will never happen with my one hour bladder but a girl can dream. Or not... if she doesn't sleep.

Austin had a rude awakening... or rather was RUDE when he was awakened. There was a new water mark on the ceiling right outside our bedroom doors and my dad was up on a stepladder trying to determine the source while I banged on the floor upstairs so we could figure out whether it was a bathroom or kitchen leak. I mean, I'm sure that's not a pleasant way to wake up but it was nearly noon and it was a time sensitive situation. He's had a rough time lately. His girlfriend very abruptly broke up with him and he's really bummed about it. He's going through some "not growing" pains. Everyone else in his life is moving forward and going to school or having babies or working and he's just not doing much of anything. Part of me wants to be compassionate and part of me wants to extend a little tough love so that he will be motivated to do something with his life.

Tomorrow will be an early day because I have an appointment at the clinic for lab work since my liver enzymes were elevated last month. I think they're trying to see if that was a fluke or consistent. I do lab work again in July and then see the doctor to review it all. I don't really know what it all means or if it has anything to do with the evil gut pain but it's free so I'll play. I go back to the pain clinic on Friday and then I'm done with them until August. Good times.

I can't remember what I ate yesterday but today I've done pretty well. I had cantaloupe and cherries for breakfast... avocado, tomatoes & snap peas with basil over cubed french bread with olive oil and balsamic vinegar for lunch (it was soooo good!) and for dinner Austin made stuffed mushrooms and rice. No main dish, just stuffed mushrooms and rice but honestly, I was full after eating that so... good enough, right? I'm thinking about having some peanuts while watching the Dancing With The Stars finale. #TeamMaksandMeryl

I watched the premiere of the Bachelorette last night. I have never watched any of the seasons of Bachelor / Bachelorette because on the surface it seems like oversexed young people acting inappropriately on tv. This bachelorette is from Atlanta so I'm mildly curious. Just mildly but there isn't much on tv on Mondays other than random documentaries and/or Antiques Roadshow on PBS. It's also mildly interesting because one of the contestants died between the time the show was filmed and now. I realize I'm making a very thin case about why I would burn any brain cells on the Bachelorette but I really don't have much. It's come to this.

And that's about all I've got today. Usually if I'm quiet for more than two consecutive days y'all worry. No worries. It's been a better week than last week but not great. That's all. Love and hugs, y'all.

Back on track! Love the sign in your room. Inspirational.

I noticed you have a busy day tomorrow. What can u do to pad your day and rest. Make Thursday also a calm day as wed will have much activity. See how this works. God bless.

Love the sign, I also really love this hymn. Hope it is a great day for you!