The State of Health Care In America (according to me)

I think this is maybe my fourth attempt at blogging since the last blog entry. Sitting down to blog is a magnet for distraction whether it's a cat who needs to be between me and the laptop or a kid with a chatty gene that he did NOT get from me. I don't think. Maybe.

Anyways... all you've missed is a couple of migraines (today being the third one), an all night tummy trouble party and the usual aches and pains.

And a dog vs. a rubber alligator that was pretty funny. 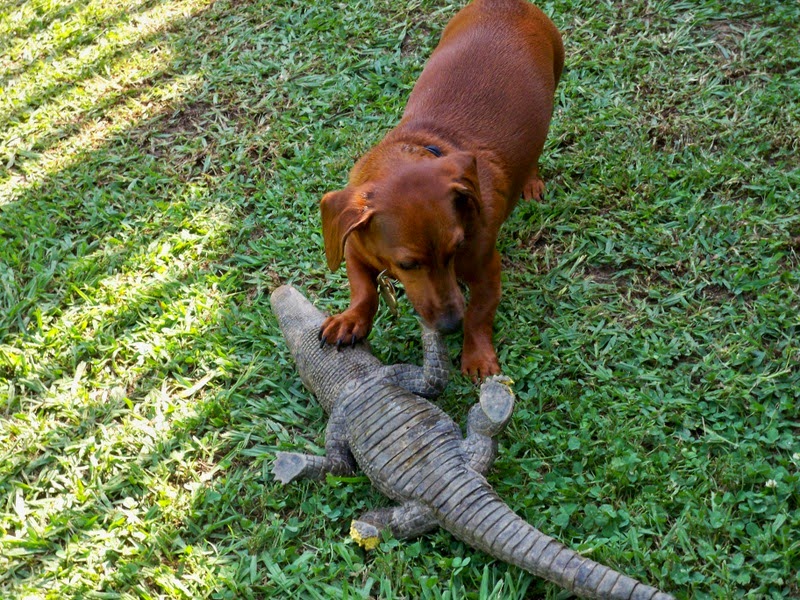 Today I went to the county health department for an exam to try to diagnose the evil gut pain. White County Health Department vs. Clayton County Health Department is worlds and worlds apart. There were maybe three other people there the whole time I was there (which was a very long time). In Clayton County the entire parking lot would be packed and the waiting room full to the extent that people wait outside. My whole deal cost $75 instead of the $115 I was quoted which made me feel better about going there rather than trying to get in to see a gyn which would have no doubt been in excess of $200. They told me that usually they have funding which would have made it all free. They recently lost funding for contraceptives as well - which made me feel better. Not that I think that is a good thing... I mean, honestly, I think if you play you ought to have to pay but the reality is that people don't. I just think it's a screwed up world where we are more concerned with making sure teenagers can have sex without consequences than we are with diagnosing someone's pain. There was a grown woman- I mean old enough that she was a grandmother, a young grandmother but nonetheless - who came in needing a pregnancy test so she could get back on medicaid. They made her pay $28 for it. I know that in the past all of those kind of things were free. I feel less disenfranchised than I did last week when I found out I was going to have to pay today.

Anyways. I didn't find out anything definite today but we discussed a lot of possibilities. I saw a Nurse Practitioner instead of a doctor and she spent well over an hour with me. Once we get results back from what she did today then we'll know what the next step should be. Different things are covered or not covered -- or I should say certain things are "funded" and others aren't - and it's so arbitrary that it makes your head spin. Even trying to figure out what to give me for my kidney infection (that is still there... and pretty bad according to today's test) was Russian Roulette because I can't have sulfa drugs which they normally prescribe for that and the next effective meds are expensive and the next drugs can't be prescribed by the Nurse Practitioner under their guidelines for my diagnosis without getting approval from a doctor (and trust me, there's no doctor on site). I mean, it's insane. She couldn't believe that the clinic doctor was going to prescribe me amoxicillin because she said it's absolutely useless with urinary tract infections so I guess, in a way, it was good that he never bothered to follow through with my prescription. I still haven't gotten a call back from the clinic after leaving a message that my meds were never called in. I appreciate the money they've saved me by providing treatment for my high blood pressure but honestly, there are so many dots to connect when you receive medical care this way.

Ironically they scheduled me for a mammogram which is one hundred percent free. Apparently the breast cancer lobby is stronger than the lobbyist for coverage of other women's health issues. And as I pointed out before, if you're poor with a brain tumor in my state, you're out of luck.... but if your pap smear shows even pre-cancerous cells, you qualify for women's health medicaid which will cover anything and everything that is wrong with you. SO almost, in a way, I'd be better off if my results come back just a little bit bad. If any of you are out there thinking that Obama is the Second Coming of Christ because of his "Affordable Health Care Act"... let me be first in line to tell you that the health care delivery system in our country is very, very broken and if there had been two party discussion and involvement in working to fix it, I believe I would be much better off. If perhaps, Nancy Pelosi, there had been an opportunity for legislators to read the bill before passing it. That's all I'm saying.

I spent over two hours at the Health Department. When I got home my parents went to the Y and I dog sat Oscar, the needy dachshund - who is fine as long as I stay near him and he has a cozy blanket to cover up with. I haven't had as much time to work on my cross stitch or to catch up on Big Brother After Dark and that makes me feel out of sorts. I'm a creature of habit. I missed breakfast because I wasn't able to stomach it before I went to the dr and I missed lunch because I was too hot and in too much pain to eat after I left the doctor. All the poking and prodding was quite painful. Now it's dinner time so I need to see what I can put together since it's a "fend for yourself" night. I'm thinking there is a big bowl of cereal in my immediate future.

The good news is that tonight is good tv watching - Big Brother and Who Do You Think You Are... and the kid is back at his girlfriend's house so it's back to my normal peace and quiet here in the Whine Cellar. I finished my study of World War 1 on Khan Academy last night due to a lack of interesting television. I also watched a gajillion youtube videos of different musicals. I love watching backstage tours and production stuff because that's MY part of theatre. I found a great series about the people who are (were?) in Mamma Mia who have kids and how they juggle theatre and parenting. Very interesting.

ALSO... I got a little package in the mail with something chocolate from a school friend. It was her way of celebrating her birthday by thanking people who had been influential in her life in the past year. Unfortunately my parents got the mail out of the mailbox on their way to the Y so my package sat in the car while they were there... so all I know right now is that I have something chocolate to look forward to once it re-solidifies.

Anyways... so I guess you're all caught up now and I've gotten all my bitterness over health care out of my system for the day. How is your week going?

Oh Heather! I really hope they are able to get your health issues sorted for you in some small way. Living in constant pain sucks. I feel for you. Big hugs from Oz...xxx

wish you could move here!! you could get health care! it's why i won't leave ma. i hope they figure it out!!