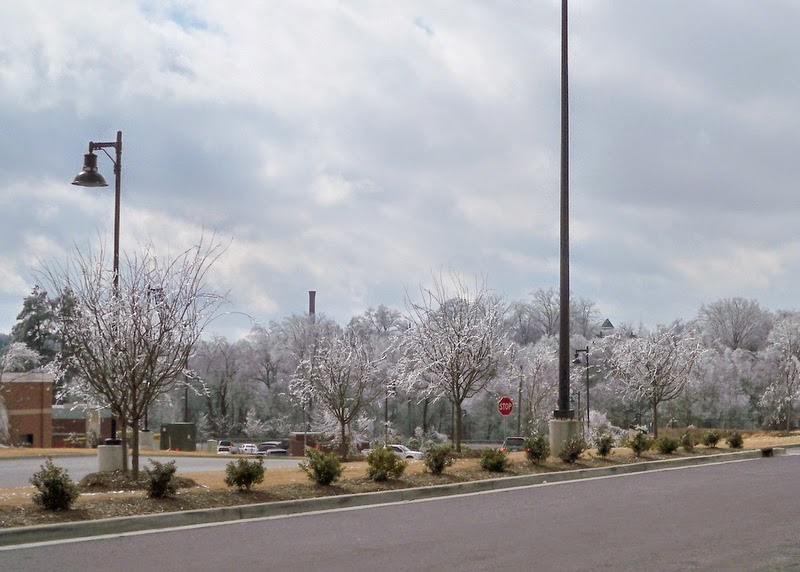 Let me just go ahead and get this out of my system even though I know we're all really tired of hearing about the weather but... my word IT IS SO COLD outside today! I think our high for the day was supposed to be 23. We woke up to another thin layer of snow covering everything and when we left the house this morning it was something like 8 degrees. Too dang cold.

So you know how I have been talking about this crazy gut pain for a year and a half? Trust me, as a person who lives with pain every day from my whacked out spine, for the gut pain to be worthy of mentioning just about every time I blog, you know that has to be some intense pain. Since I'm in this purgatory of not being able to work and not being approved yet for disability I've been without health insurance for almost three years now. That means that not only the crazy gut pain has gone undiagnosed (is that a word?) but also we have not been able to do the necessary follow ups on my back pain. My pain doctor would have preferred to do more diagnostic testing on my back and hip pain but I couldn't afford anything more than just basic maintenance appointments. It is so very unsettling to have pain, significant, continuous pain and not be able to find out what's causing the pain. It's stressful. It keeps you from feeling connected with the rest of the world because of being so distracted from pain. It has been a time of so much insecurity for me.

And then... finally the doctor at the clinic said that there was a way for me to get an ultrasound through a charity program at the local hospital. Alright. So I thought I'd get the ultrasound and at least be able to rule out some possibilities, even if I couldn't get an outright diagnosis. Then I found out that the charity program would cover the full amount of the ultrasound AND any care I receive through that hospital from now until the end of August and then, if I'm still in limbo about health insurance, I can reapply to continue on the charity program. There's a lot I don't know about the program but I am so very thankful to have the opportunity to have health care without worrying about owing for the rest of my life.

AND THEN.... yesterday I went to the pain doctor and let him know that I had been approved for the charity care and that the clinic had scheduled me for an ultrasound to hopefully diagnose the crazy gut pain. My pain doctor said, "um... why drag this out longer than it's already been?" So he sent over orders for me to have an MRI and x-rays to get not only a better idea of what's causing the crazy gut pain but also see what changes there are, if any, in my spine since the last time - four years ago  - I had been able to have scans done. I haven't confirmed this but my pain doctor thinks that the charity coverage extends to the doctors that are affiliated with the hospital which means that I could actually see doctors who specialize in whatever my problem is, not just depend on the free clinic. My pain doctor isn't affiliated with the hospital- they are sort of a different animal as most pain clinics are - but they do know a lot about what goes on at the hospital.

Side note: I wish someone had told me about this program sooner but I have to believe that the timing is exactly perfect.

So anyways... the sweet girls at the pain clinic got on the phone yesterday and made arrangements for me to have all this diagnostic testing done at the same time to prevent me from having to make the trip to Gainesville (about 45 minutes away) more than once, especially since I am having so much trouble with dizziness and try not to drive long distances alone. All of that was scheduled for today. When it's the coldest day we've seen here in decades. Cold. Cold day. And as anyone knows on cold days you dress in layers. Did you also know that the Imaging Center keeps things nice and toasty warm in their exam rooms since people are normally wearing less clothing than normal during medical testing? Except for when there are tests that you don't have to have clothes off to do and in that case I was wearing a thick sweatshirt and warm fuzzy pants. In all three tests at least some part of me was warmer than comfortable. Then we left the Imaging Center and I was so sweaty that I didn't put my jacket on and whoooosh... out in the frigid weather ... freezing! Then the car was warm and the sun was bright so I was again feeling uncomfortable.

I've been absolutely exhausted and drained ever since I got home from the tests but I have to state once more how grateful I am to have access to the kind of care I have needed for a long time. I didn't get any information today and that's super frustrating. The ultrasound results go to the clinic which is only open two days a week so I'm not confident I'll hear anything soon. The xray and MRI results go to the pain clinic but since they're not affiliated with the hospital they tell me that they don't get results in a "timely manner" so who knows when I'll hear anything. I requested to have results sent directly to me and apparently that's just not done. Ever. Since I am so grateful to have charity care I didn't want to be a demanding medical consumer but yeah, would like to know what they saw.

When they were doing my x-rays I told them that I have an extra vertebrae in my lumbar spine. The techs told me I saved them a lot of time in positioning and repositioning and having to retake multiple xrays when things were off center. Come to think of it, seems like every time I've had x-rays it's involved a lot of re-doing the same shot. I guess that's the way to speed things along - make sure the techs know about the skeletons in your closet, at least that the skeleton in your closet is abnormal. If any of you have any weird anatomy you might want to let the friendly medical folks know.

Anyways. That's it for today. It was cold and I have been nuked until I glow. We are expecting more wintry precipitation tomorrow and then it will be climbing back up to more moderate temperatures. It will probably be 80 degrees here within the next month and we'll be laughing about the very unscary benign reason for my gut pain just have to wait it all out.

Hope you're warm and cozy! Love and hugs, y'all!