My mom came home from the hospital yesterday. She has to be careful what she eats but she's feeling good, at least based on the things she insists she can do like laundry and vacuuming and... yeah. If you know her that will make perfect sense.

I'm happy to be a cat person for a little while instead of a dog person. Oscar is sweet and cuddly... except when he isn't. He can be quite ferocious when he chooses. And that whole... must take him outdoors to pee thing... so different from cats. But there is more Mawmaw hospitalization in the future so I will catch my breath and try to make it up to my cats between now and then and be ready for my next dog-sitting stint.

Stubby the 3 legged Wonder Cat finds the flocking on my artificial tree to be quite tasty. I find the frequent piles of flock tinged vomit less appetizing. 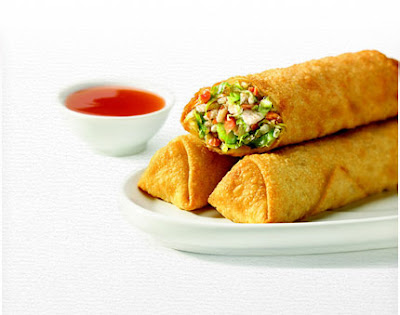 When I'm not experiencing sympathetic vomiting from cleaning up behind the cat, right now I'm loving Chung Egg Rolls (in the frozen section of the grocery store) and Russell Stover chocolates. I've always been leery of frozen egg rolls but these are really good. I've gone through a Whitman's Sampler or two this "season" but am finding that I much prefer the Russell Stover chocolate.

Eating is challenging because of the last round of dental drama but less of a challenge than Monday or Tuesday or Wednesday or Thursday. I went back in to the dentist yesterday and had the packing in my "dry socket" pulled out and stuffed back in. The worst part of it is the shots to numb me so the dentist can properly do what he needs to do.

The drama from the other day with the pharmacist... dentist says it was all pharmacist freaking out that I was taking two kinds of pain medicine. Dentist says he knew all along what meds I'm on and backed off because the pharmacist indicated it was too much. I know that the pharmacist knows what I've been on for the past 7 years since I moved here and I know that the pain meds the pain doctor gives me are stronger than what the dentist gives me. Bottom line: it's not all adding up. Dentist gave me another prescription for pain meds yesterday and I basically just stuck it in my purse and didn't bother. I don't have the emotional energy to sort it out. 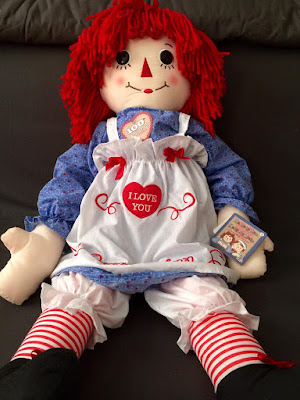 Cosette has picked up a new word: Bobo. I say that it's the word she says for "baby" because I have a Raggedy Ann doll that I keep on the day bed in the living room. Whenever I hand it to Cosy I say, "ooooh... love the baby" and she pokes at her eyes and eats her hand and kicks her. A day or two ago she started saying "bobo" in the same tone that I say "baby" whenever I gave her Raggedy Ann. Last night at dinner she kept hollering "BOBO! BOBO! BOBO!" I could hear her from down here with the door closed! They thought she was saying "oboe". Austin brought her down here to show me how she was walking while he held her hands and I handed her Raggedy Ann. She got all crazy excited and started screaming, "BOBO!" And hugged her tight. Austin let her carry it upstairs with her and she kept saying "BOBO!" all the way. Babies are funny!

She also says "dada" and "mama" and I swear she says "nana". The other day it sounded like she said "cat" and she mumbles something that sounds like "have it" when she signs "want". She's very vocal and can be very loud! It cracks me up to hear her. 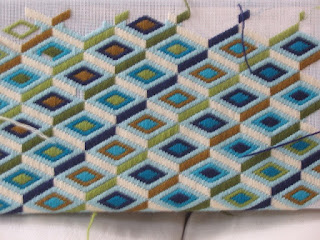 I finally started a new needlepoint project. I'm doing something like this... but the white part is pale lavender and the blue diamonds are a pale gold. I haven't worked out all the other colors yet but I'm trying to use DMC satin floss even though I have tons of other thread I could use. I just like things to be consistent. Sometime in the future I need to do a project that takes up all my old bits and pieces of thread but this project will not be it.

Pop bought the stuff for sausage balls this morning. I tried to get it yesterday after I got done at the dentist. I left the dentist and went next door to the post office to mail presents to my brother in New York. Despite it being this close to Christmas the line at the post office wasn't bad. The postal employees were all working hard to move the line quickly. I waited less than ten minutes. I headed across the street to the grocery store and as I was walking in I started feeling kind of woozy, most likely from the anesthesia. I decided to abbreviate my visit and just grabbed my Luigi's Italian Ice (I currently have 8 boxes in the freezer but ... you never know when I might go through a bad stretch and not be able to make it to the store... or when they might jack the price up again...) and I bought more of the Chung's Frozen Egg Rolls mentioned earlier. And went straight home.

The past week has been stressful and we definitely won't rest easy until Pat is taken out and Mawmaw is back to her normal self but it's less stressful now that she's home. I have a few things to do between now and our Christmas Eve brunch but not so many things to do that I can't afford a rest day today... so that's what I'm doing. There's a cat curled up in my lap and I'm avoiding stairs and it's a good day. Hope it is for you too! Love and hugs!

I hope your mom is still home and feeling better. The wait is the worst part, as you know.
Merry Christmas to you and your family.
xo m~