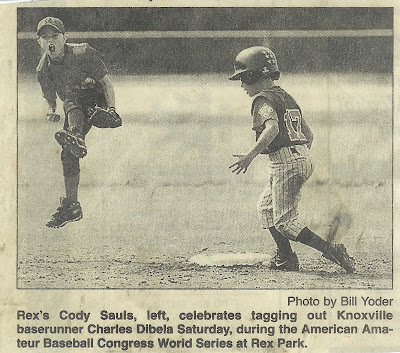 This picture captures Cody's spirit more than any others I have from his childhood. He was 9 years old. This was the Summer of 2000,  the year his dad and I split up. He was on a team that he was "picked up " for during the one year we played at Rex Park. At the end of a baseball season, whenever it gets to post-season tournaments (which were a huge deal) teams that are going to tournaments are able to pick up kids who were on teams that are not going to tournaments. Every year that Cody played, except his four year old year, he was picked up for tournaments. You can tell by this picture how much he loved the game and how "into it" he was, even at 9 years old. 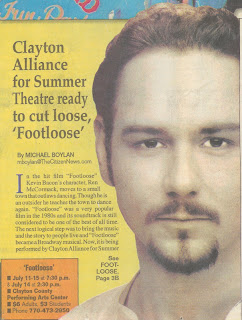 And this handsome man with the piercing eyes is my Purple Michael. Footloose is the first show we did together. That summer we directed Footloose and Fiddler On The Roof at the same time. It was hectic. We had a lot of 12 hour days. We were both way more broke than either of us was willing to admit at the time. It wasn't unusual for me to stick dried beans in the crockpot at the theatre for our dinner. My dad would make homemade pimento cheese and bring it to us. Some of our lovely friends at the theatre would invite us to dinner. We survived and it was really just a precious time for us. Every talented, creative person needs someone to believe in them and remind them, when times get tough, how amazing they are. I always say that I just hold a mirror up to reflect who he is back to him. At any rate... ten years have gone by and it's still, truly, one of the best times of my life.


So Austin's meeting with Vocational Rehab was YESTERDAY. I was thinking it was this morning but as you know (by my two Thankful Thursday posts) I have completely lost track of time. Fortunately I had emailed the lovely lady we were scheduled to meet with YESTERDAY and asked what time our meeting was scheduled for TODAY and she said, "I thought it was scheduled for today at 3pm" Ooops. It was around 2pm when I got her email so I hustled and got dressed and woke the Vampire and endured a half hour of verbal abuse while he got ready. As we drove to the meeting he announced that was still intending to move in with his married friend.

Now... this is tricky. As I mentioned before... I didn't object to Austin's plans originally because I knew that if I did, for the rest of his life, anything that went wrong would be because I didn't let him move in with married friend. So I was perfectly willing to let him figure it out for himself and I was more than willing to be the soft place for him to land when his plans failed. And then we had the little escapade that we did on the day of his graduation. He had a little money - it all went to alcohol. He lost his wallet with his id and his insurance card and what little bit of cash he had. (I later found it). He got so stinking drunk that if I hadn't been a real shrew, he would have missed graduation. Married friend's mother (who is, I have to say, riding the Crazy Train) was explicitly clear that she had NEVER agreed to having Austin live there and in fact didn't want her own son living there but she really hated the combination of the two of them together. (I concur.) Add in the fact that married friend is going to become a father *any day now* and knowing what I know about human nature, I would not be one bit surprised if he moved back in with wife and child once child is born - or has them move in with him - and in either scenario, Austin is the odd man out.

And let's not forget the fact that married friend spent ALL OF LAST SUMMER IN JAIL because he got into a fight with his mother and she called the police and he was charged with domestic violence. It was not his first time to be charged with domestic violence. He has a history of it, in fact. Austin has a history of not responding appropriately in stressful situations. In fact.... he has a disorder that predisposes him to behave inappropriately in stressful situations. Such as, oh, I don't know... YESTERDAY when I woke him up at 2pm to go to a very important meeting. So you have two young men who have a history of inappropriate response to stress living with the Conductor on the Crazy Train and it is a one hundred percent recipe for disaster.

So... since sometimes the obvious is less than obvious to Austin... and since he was already in a nasty mood and a captive audience (since we were in the car) and I knew he couldn't storm off and slam his door in my face like he usually does when I say things he doesn't like... I said, "that's not really an option. THEY DON'T  WANT YOU TO LIVE THERE". He insisted that Capt Crazy said it was ok. And I said, "yes, but the first time things don't go well and she wants you out of there I will be an hour and a half away..." His fear is that he will move to Riverdale and get shot. I mean... yeah, it's not as safe as it is here in Hooterville but if it were that dangerous, my parents wouldn't live there. And... let's face it... there's evil everywhere. And (refer to previous paragraphs) CRAZY everywhere.

Then we got to our appointment and went in and met with the nice lady. Basically this program will provide Austin with a complete free ride to go to college. It covers tuition, books, room and board for up to five years of college or two and a half years of technical school. Since he doesn't have a good grasp on the value of a dollar, he doesn't realize what a huge gift this is. The good news is that he will always be eligible for this program so even if he goes to work for five years and then decides, "wow, I don't really like asking people if they'd like fries with that"... he can still use this program. They will also assist with job placement so as soon as we figure out what his address will be, he can go right to work.

There are some stipulations - he has to meet with his counselor once a month, he has to maintain a passing grade, they will only pay for a class once so if he takes a class and fails it, the next time he takes it, it's on him. It will only pay for three remedial classes (and he will probably need more). It pays directly to him and he has the responsibility to pay for his expenses himself (huge risk). But... ultimately... for a kid with no college fund and parents who are unable and unwilling (I'm one of those, his dad is the other) to pay for his education, it's an amazing, unbelievable opportunity. I pray - seriously PRAY that he will take advantage of this because it could totally change his life.

Ultimately, whatever will be, will be. I can't change anyone, I can only be responsible for my response to their choices. If Austin stays here... he's on his own. No money from me (even if I had it to give). I will not bail him out when he and married friend get out of line. When he's ready to appreciate what enormous sacrifices his grandparents are making by giving us a place to live... and he's ready to appreciate the opportunities that lie before him that most people would jump at... then we'll be back in business. In the meantime... I'm just limping toward the finish line.

Happy Friday (added to show that I know what day of the week it is). Love and hugs!

I’ve been a follower on your blog for a while now and would like to invite you to visit and perhaps follow me back. Sorry I took so long for the invitation