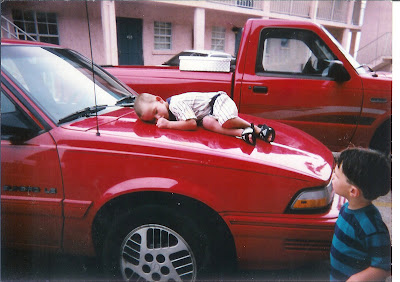 ETA: I know it's not really Thursday.

This is a picture of Austin in Panama City Beach in (I think) 1997. We took a trip to PCB with our besties, Sheree and Hayden. We had all three boys at the time (obviously, since we had Austin and he's the baby) and they had two of their three by that time. Their son Hayden is Cody's age and their son Hunter is Austin's age. They have another boy who is turning 12 this year (sort of a caboose). That's Hunter in the corner of the picture wondering what the heck Austin is doing sleeping on top of the car. I can't remember if it was before or after he crashed on top of the car... but it was on this trip that we lost him and found him hanging out on the beach with some teenage kids. He could have wandered into the ocean... been kidnapped... who knows. But that was Austin - "Lost-in" always wandering off. That was the point where I started writing our contact info on his arm in sharpie marker in case he was lost. Even back then his perspective was that he was never LOST because he always knew where he was. Gotta love that kid. It was also on this trip that we found out that the "economy motel" with adjoining rooms that we had reserved were disgusting to the extent that we really couldn't stay there. The only replacement we could afford was a room at the Ramada with three double beds. Sheree and Hayden slept in one... Robert, Austin and I slept in another, two of the boys took another bed and we had a rollaway bed for another boy. Nine people in one hotel room. It was insane but it rates among the best vacation ever. Love, love, love Sheree and Hayden and miss them terribly.

Since yesterday was my whiny day, I'm determined to make today a more positive, Pollyanna kind of day.

I heard back from Prospective Employer #2 yesterday. They are "going with someone else who is a better fit for their agency". I kinda suspected this would be the case. He wanted someone full time and would concede to 30 hours a week but no less. I also requested insurance, even if I had to pay the entire cost of it. He wanted me to go with an individually purchased plan instead of the company group plan... but unfortunately... I'm uninsurable.

Haven't heard from Prospective Employer #1 yet but he was going to make the decision some time this week and since it's just Wednesday morning, I'm not freaked out yet. He's the one I really want to work for but...

This whole thing has been somewhat a process of elimination. I knew I had to file for unemployment, knowing that I probably wouldn't be approved. I was - at least initially - and then it was reversed.

The next step was to come to the realization that I can't, in good conscience, commit to a full time situation, which means that I won't have an income that will allow me to live by myself.

Next... I started looking for someone in the area near my parents' house that would agree to part time for me.

If that doesn't work out... I'm going to go ahead and file for disability. There's a part of me that wishes I had taken that step FIRST but hindsight is truly 20/20.

I WANT to work. I WISH I was strong enough to work full-time but I'm not. I can't tell you how discouraging it is to me to NOT have an income. I've always been self-reliant and I hate knowing that I can't provide for myself and my kid right now.

I also hate this feeling of not being able to handle this move by myself. I priced UHaul trucks yesterday. Even the smallest truck, which I believe there is NO WAY I can drive myself, which means I have to find someone else who CAN drive it and is willing to invest the time (I have had one tentative offer and have one other possibility) and I have to make sure I have the money to handle it.

I was so frustrated with Austin yesterday that I went ahead and started clearing the boxes out of my closet. Holy moly... I forgot just how bad the pain can be when I don't "honor" my spine. Anyone with chronic pain will understand that phrase. You know how when you have a bad foot/knee/leg/whatever, you will walk gingerly or with a limp. My spine is sort of the same way. It should never be asked to carry more weight than it already is carrying (which is far too much). But I'm running out of time and running out of options and it sorta freaks me out. Waking up this morning and having trouble walking because I did too much yesterday also freaks me out. So the plan is to do a little every day. If it comes down to it... I'll buck up buttercup and move boxes myself and drive that UHaul myself but I pray I don't have to. Ultimately... I'm going to do what I have to do. I'm going to send out an SOS soon.

Austin is in a much better mood today, thank the Lord. He won't go to town with me today which is frustrating. I was hoping to have some quality time with him but... I mean, it's a symptom of the whole disease, not really the autism, just the age. He doesn't want to hang out with mommy. I'm ok with that. Sorta. I mean... I love him and want to spend time with him... just like with all of my boys... they're incredibly smart and witty and really enjoyable.

I'm also researching (via pinterest) how to feather my new nest. It's a unique space in that two walls are brick and two walls are paneling. It's a converted garage. It has the ghosts of all the kids and grandkids that have lived in it over the years... heck, even my ex-husband lived there for a time... I mean, it literally has everything from a rainbow that I made for a bulletin board back in early childhood education class in 1985 to a painting that Ryan made when he lived there hanging on the wall... a table... lots of random stuff that has nowhere else to go (including a piano)... Lots of books and trinkets and so forth... and no closet. I'm planning to buy a little wardrobe rack, I've seen them for as cheap as $20 on amazon.com so I believe I can do it. I've got a sturdy rubber maid shelf that I'm using as a room divider/place to store my clothes in place of a dresser. Half of my bedding is china blue and yellow from a makeover my friends did for me in 2003 and half of my bedding is brown and sage green from a makeover some other friends did for me in 2010. (and how blessed am I that twice in the past decade I've had friends who loved me enough to do that?)  I'm thinking that I will display my teacup/teapot collection and use that as the theme for the room. That will also give me a little sense of the space really being my nest.

Gosh this is long. Anyways... back to the pain doctor today... I don't anticipate any changes in what we're doing but I'd like to ask for a total spine replacement. Think they'll do it? Hope you have a great Thursday. Love and hugs, y'all.