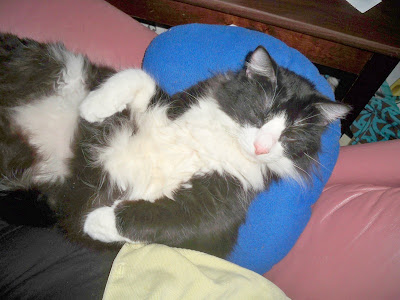 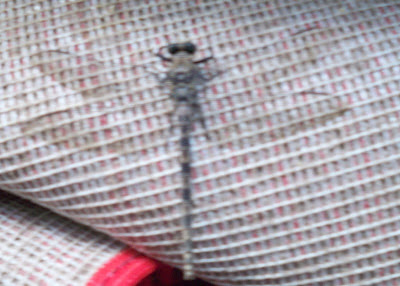 What's going on at our house? Well, there's a cat wearing tighty-white-ys (in case you missed it on Facebook yesterday) and there's a dragonfly on a rug that we had to throw out because it was in Austin's room. Oh, and moving.

We got a lot done today but not enough. Ok, well, I guess it was enough. It was most of the things I meant to do today minus packing the kitchen up. I got two cabinets packed.  It was progress, anyways. I'm astonished that my back hasn't bothered me more this week (more than it has and more than it usually does) but I have made up for it in headaches. My head has hurt so bad for the past two days that I felt like my eyebrows were slipping off my face. That bad. But we (meaning me) (ok, and Austin and his married friend to some small degree) we soldiered on. As did Angie and Miss Kate who took a load to the dump for me today.

And Trouble... pictured at just the right angle yesterday that it looked like he was wearing bikini bottoms... I guess I mentioned that already. But isn't he adorable? Love that kitty. He is disturbed that things are out of place here and has voiced his objection many times - although he's not typically a vocal kitty. He did really curse out a pushpin on Austin's wall that he (the cat) thought was a bug. He stretched as far as he could to try to get it down. Bless his heart.

At any rate... the plan is that by Saturday evening we'll be finished here in the nest. Austin still says he's moving to married friend's although married friend confirmed my suspicions that his mother has not approved for Austin to live there. He also confirmed my suspicions that his mother is ... well, um... less than stable. Obviously. He's still going to family violence class because of the charges she filed against him last summer. I mean, married friends mother filed against married friend. I may be too tired to truly make sense. Later, obviously coached by Austin, he (married friend) said that his mom HAD actually approved it and it was all good and it wouldn't matter anyways because his grandfather paid the rent there, not her. However, considering the fact that married friend spent last summer in jail, I'm not sure that grandfather has much control over what goes on there. At the end of the day... if Austin goes, he goes. It won't take long until the Gravy Train derails and the Crazy Train takes over. I know how little he contributes to a household and what a huge money pit he can be and I'm fairly certain that nobody is going to sign up for that kind of deal that's not blood kin.

In other news... I mentioned earlier this week that neither of the agents I had interviewed with two weeks ago had punched the golden ticket for me. Yesterday, randomly, I got a call back from another potential employer and I was DYING with a headache and had been up for far too long and wasn't making sense. I decided to put all my chips on the table to see if I could eliminate some of the variables and perhaps figure out why Prospective Employers A & B had not panned out. The conversation went well and they said they'd call next week. Today I got an email from another prospect who I had been exceedingly candid with in our previous discussions and they were eager to have an interview. Ultimately I know that I'm a bit of a gamble because nobody knows how long my spine will hold out but... I'm also fully trained and licensed and there's no learning curve involved. We'll see what happens.

My brother left for three weeks in Africa today. It's a rough time for my sister-in-law because my brother IS an awesome father and husband and he is so supportive of her and his absence is really felt. I like to tell her that I trained him well. Having me for a sister would prepare a guy for just about anything. My brothers are all good significant others and it isn't ALL because of my parents, right?

Sarabeth has been at her first week of sleep away camp and Jamie has been at day camp at the same location. They go to the Woodlands Camp which is here in Cleveland so they're not THAT far away but it did present some anxiety for everyone. Our little girls are growing up. So the trip to the dump that normally would be something I would ask my brother to handle... my sweet sister-in-law took care of for us. I had a couple of little treasures that I thought the girls would enjoy - lip gloss, a bead kit, a coaster kit - and a few things that I thought Angie would enjoy - whole grain pasta  - and so they have a little care package waiting for them. I will have to try to get back on track with sending care packages in the mail for them while I'm living far away from them.

Tomorrow I will DEFINITELY finish packing the kitchen. I have little bits and pieces in other rooms - the bathroom cabinet - Austin's bathroom - one drawer in my dressing table - my tv stand. Hopefully, though, we'll be organized enough that we'll have one truckload for the storage place, one truckload to my parents' house/Cody's house and cleaning and that's it. Slow and steady wins the race.

So that's my Thursday. Hope you all had a great day. Love and hugs, y'all!