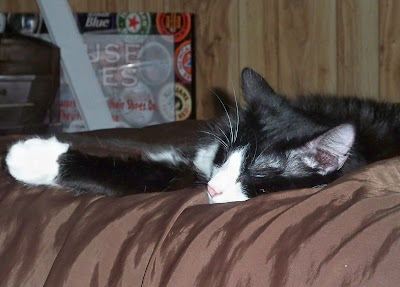 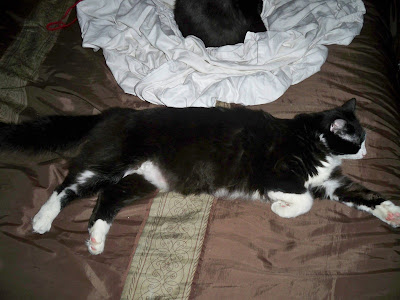 It's a hot, lazy day in Atlanta.
I hate when people run the words together and call this, "Hotlanta". It just sounds weird to me.
Little Kitty has a couple of preferred napping spots. He loves my bed.
He also likes getting under the table that's between my bed and the wall.
That's his hideaway from "goggies".
Stubby has two spots: the stool beside my recliner -so he can intercept any brushing of "goggies" - I keep a brush there to brush Lily, the big goggie who is constantly shedding. His other favorite spot is on a fitted sheet wadded up on my bed. 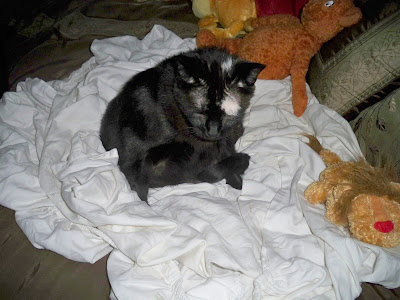 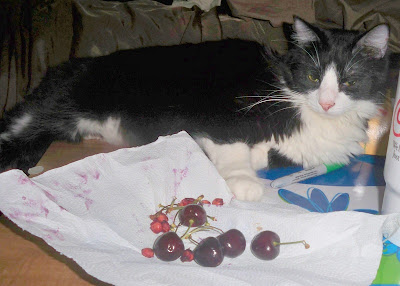 While the temps are breaking records outside, I'm staying inside. Pop and I went to the grocery store yesterday morning before it got hot. Fresh sweet cherries are in season - they're only really perfect and sweet for a few weeks a year - so we got some. Little Kitty sees any produce as a potential sport so he hung out beside the cherries looking all innocent until he finally decided to make a break for it and snuck off with a cherry stem between his teeth.  He is such a little trouble maker. Although my term of endearment for him is "Little Kitty"... he really is TROUBLE! 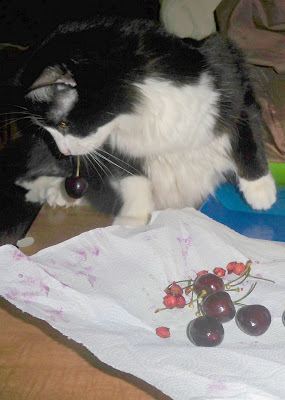 We've all been eating well here and I think we've all gained a little weight. The cats are enjoying the benefits of living with their "grandparents" and getting the "good food"

I'm not suffering either. Yesterday (for example) Pop fixed scrambled eggs, grits and toast for breakfast... I had pimento cheese on crackers and sliced cucumbers for lunch... a few cherries... ok, a lot of cherries... Pop made the little english muffin pizzas (like I make) for dinner. They are a little ground beef patty on top of an english muffin, topped with tomato, bell pepper and onion, sprinkled with olive oil (this is what really makes these yummy) and then cheese and baked in the oven. And then... everyone has to visit the "ice cream man" (the freezer in the Utility Room where the ice cream treats are stored). It reminds me of what Austin and I used to call "the walk of shame" when we only had the walk up Dairy Queen in Cleveland, so anyone driving by knew you were indulging.

This morning the parents are at church and I'm killing off brain cells watching "Super Soul Sunday" and a variety of reality tv shows and documentaries. Oscar the grouch (not really - he's just spoiled rotten) is trying to find room in my lap beside the laptop since neither Mawmaw or Pop are here to cuddle him. This "goggie" is so rotten that my dad actually hand feeds him. But... I guess that's what we do when the kids are all grown and you can't spoil them any more - you spoil the grandkids and the furbabies. I think there is more conversation in this house between humans and animals than between humans and humans. It's hilarious! And not crazy at all.

I really love being here with my parents. I was one of five kids so the one on one time was limited and then I had the first three grandkids so the attention was on the babies and then my brothers started getting married and there were more babies and so on. I am not saying that I was neglected, there has just always been so much chaos and so many people around... and meal preparations and whatever festivities...I usually leave family gatherings replaying the conversations that were interrupted or cut short just because of everything going on around us. My generation is a drive-by generation... we do our communication via text message or in 140 characters or less. We've lost the era of sitting on the front porch with a glass of lemonade really talking or even just quietly enjoying each other's presence. That's the best time, for me, when you are able to just *be* without feeling the necessity to fill the quiet moments with forced conversation.

Anyways... I don't think I've mentioned that there is a very likely job situation for me. I am limited by what I can say publicly at this point but it's a great fit for me in actual job duties and flexibility in work schedule. The location is great (near my Aunt Ginger and Uncle Carl), the commute is reasonable (about fifteen minutes at most, going in a direction against the typical traffic patterns) and they like me, they REALLY like me. I have avoided any potential pitfalls by providing them with as much information as possible. Initially, I may be working very few hours a week in a fill-in type basis, after a few weeks it will expand to closer to what I was hoping to work (25-30 hours a week). I haven't done a victory dance yet because I haven't heard the magical "you're hired" phrase YET but I did get the "you're a really great fit for our business, we don't know how we made it without you and can you please come work for us". Ok, all of it except the last part of that. Offer has not yet been extended.

In the meantime... I'm happy... well-fed... cool as a cucumber... glad my parents put in a/c...enjoying time with my mama and daddy and Cody and Marquee and all the assorted furbabies... missing Austin like crazy but totally at peace about him... watching a lot of Olympic Trials... getting ready to see my little red-haired girls tomorrow... looking forward to bbq ribs on the 4th... having some pretty intense lower back pain... brushing cats and dogs on an hourly basis... taking over the dishwashing job and minding it far less than I did when I was 14... cooking for mama on the nights that Pop plays golf (and setting him a plate aside in the microwave for when he gets home)... still not entirely organized as there are books and clothes still in my trunk... and just in general, loving life. That's our Potluck Sunday. Have a good one!

I am glad you are enjoying staying with your parents! I think if I had to live with my Mom I would go nuts after a while! Last time I was down was after my mastectomy and she was so overprotective of me! I was also bored out of my skull.

Congrats on the possible job and the cat is adorable! I still need to find you...

How is Austin doing? I've been worried about him too....

I'm so glad things are going so well with you being back home. I think that's where you were meant to be. Could you please add the subscribe to blog by email link to your sidebar thru blogger? It makes keeping up with blogs so much easier. I hate my reader thingy. LOL