I've been waking up with horrible back spasms lately. The only remedy is to immediately get on the heating pad which means... waking up enough to sit in the recliner and turn on the heating pad... which means first going to the bathroom and getting something to drink (hopefully coffee) before sitting down... which is tricky when my stinking back is in spasms because it makes my left leg not work right and the whole process of walking involves grabbing onto walls, chairs, etc, on the way down the hall. AND all of those things mean that I'm wide awake too dang early! Yet... even though I stumble through the valley of the shadow of ... discomfort... there are plenty of reasons to love an Up Early Monday today!

1. Up early means I get the coffee while it's still hot and the pot hasn't turned off yet from when Pop made it at middle-of-the-night-thirty.

2. Up early means freaking out three dogs and half the cats in the house. The other half of the cats are just furry furniture and don't move from their perches, regardless of what I do. 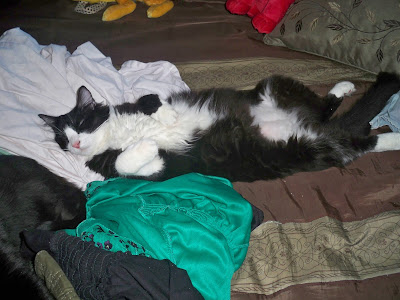 3. Up early means spending an hour pinning things that make me giggle.

4. Up early means that my hairstyle might just possibly evolve past the standard work day ponytail. Up early also means wondering if the lady who has been the only one to REALLY know how to cut my curly hair is possibly back in the United States and Facebook stalking her to find out. She last checked in from Nepal. Ponytail it is. Oh, wait... Nepal was two years ago... her status is separated... there's a chance that she may be back in the same time zone as me!

5. Up early means finding out which of my friends have insomnia. Insomniac facebook posting is the social networking equivalent of drunk dialing.

6. Up early means seeing the bubble headed bleached blondes on Fox and Friends First and guessing their first grade level word scramble at the first letter... while it takes the Fox and Friends hosts all the way until there is only one letter left.

7. Up early means being awake enough to actually eat breakfast before work.

8. Up early means finding an empty bowl on the floor beside the recliner and wondering what you ate post ambien last night.

9. Up early means wondering if there's a nefarious reason why Blogger's spell check doesn't recognize Facebook as a correctly spelled word. And then realizing that blogger disagrees with your failure to recognize facebook as a proper noun.

10. Up early leads to the best time of day: EARLY BEDTIME! Working 9-2 today, picking up the daughter-in-law from Clayton State, picking up my prescriptions from the pharmacy and... I should be back home and in my warm cozies by no later than 3:30. It's not a bad life, y'all.

BUT THE BEST thing about Up Early is seeing Lily... the big dog... who normally sleeps like this... 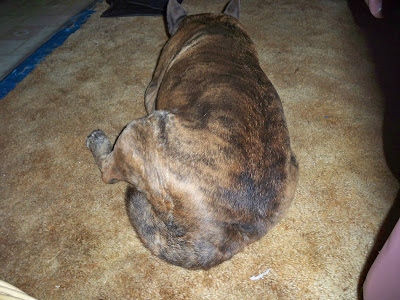 hijack the blanket that usually covers Oscar the wiener dog like this... 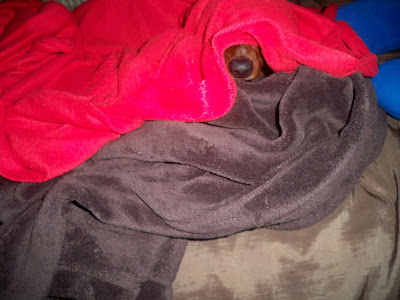 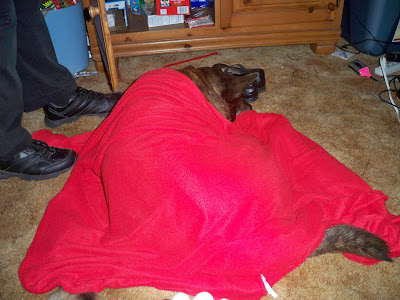