Thankful For YABBA DABBA DO!

The calendar may say "Thursday" but it's my Yabba Dabba Do Day, which makes it MY Friday. It's been a long, long week. Yesterday I got to the office twenty minutes early hoping to get ahead of the game and I still ended up staying about twenty minutes late.

Ryan left for work before me - before 8 am and the last I heard, he wasn't expected back to Cody's house until 1am. At one point he called Cody to go to the job site and help him. THAT'S a long day.

It's all in perspective, I suppose. I can only tell you about the view from here... and this... 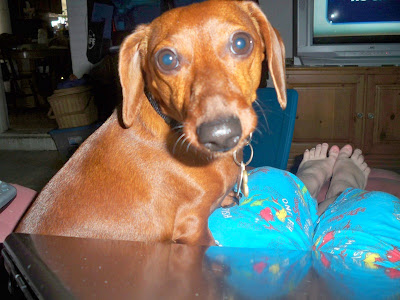 is usually the view from my nest. This picture was taken around 3pm yesterday. Yes, those are pajamas. At 3pm yesterday I was TOAST. Exhausted. Worn out. Done. (and yes, I have some incredibly ugly toes. don't judge.)

Mama picked up Marquee from school (which I sometimes do but didn't yesterday, which was good since I got hung up at the office). Cody cooked dinner for us - spaghetti. Then Cody and Marquee rushed off to help Ryan. Pop went to church. And I stayed in the nest.

I would love to be ten feet tall and bullet proof again, like when I was going from work to work or work to the ball field or work to church. But... I have to remind myself that my limits are different from other people's limits and what I do is already more than my doctors thought I'd be able to do.

I've been tempted to ask my doctor to print off the list of my diagnosis' that pops up on their computer screen when they go into my computerized file... just to remind myself on the days that it's ok. Between osteoarthritis, fibromyalgia, spondylolisthesis, spinal stenosis, COPD (although, thankfully, I haven't had a lung issue since June) tachycardia (which has been seriously bugging me lately) and so on and so on... I'm doing quite alright.

I have to convince my cats that they really don't need to sleep at my feet every night. I've been sleeping like an upside down question mark to accommodate them and it's muy uncomfortable. That's probably why I end up in the recliner for my last hour or so of sleep.

I also need to convince Sammy and Oscar that they don't have to compete for my attention when I walk in the door... Sammy is crated when we're not here and Oscar USED TO make sure I let Sammy out the minute I get home... but because Oscar doesn't want to share me... lately he's been growling when I let Sammy out. And then they compete to see who can get closer to my face when I sit down... 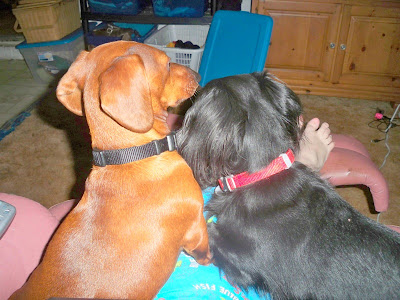 Today I'm working 11:30 to 4:30 so the animals will already have been uncrated and spoiled before I get home. I *might* be able to just slip quietly into the pjs and watch The Five uninterrupted.

Since I have a little time on my hands this morning, I'm going to chase a few more branches of the family tree. Right now I'm deeply steeped in Scottish history. It's interesting but requires a good bit of concentration.

Hope you have a great Thursday! 8 hours until my Yabba Dabba Do!