It's a day off for me! My schedule this month is all 9-2, which is good... I only work one Tuesday... and I have a big five day weekend in the middle of the month. Good times!

On Christmas, my parents gave me a Walmart gift certificate.
I've decided I want to try hot rolling my hair again. It's an easier set for me than straightening my hair and it's too cold to leave it wet in the morning.
I can't just blow dry and go... because in the words of my niece Tiffany, when she was around ten years old, "you need to put a straightener on that mess!". LOL!
So on Saturday I decided to buy hot rollers with my gift certificate.
When I got home and surveyed my Glam Station... I knew I would need to rearrange my room.
It's a converted garage and the electrical outlets are few and far between.
For maximum electrical availability, I would have to make some changes.
I was alone. Mom and Pop were at the mountain house... Austin was with his dad... Cody and Marquee were shopping.
I needed to move a rubbermaid shelf with my storage containers (that I use instead of a dresser since I don't have a dresser or a closet here).
I also needed to move my dressing table that I've had since I was 7... and it was old THEN... so it's real wood and heavy... but not so heavy when the drawers are out... and it slides well on carpet.
Mostly.
I got everything out and started on my project. Have I mentioned that I was alone in the house?
Halfway through I stopped and decided that the wise thing to do would be to wait until I had help.
About thirty seconds later I had a burst of energy and decided to do it THEN.
About twenty minutes later, the job was done and so was my spine.
I have said to myself about thirty-eleven times since then that I hate my spine.
And then I imagine myself without a spine and laugh... jellyfish me -probably pink - flopping around on the sidewalk.
Anyways.... I am one with my heating pad.
Pretty much a human jellyfish anyways... moving as little as possible.
I went to work yesterday - determined to not let anyone know.
It's a pride thing for me. I can do this. I don't want people to feel sorry for me.
It's hard enough that people in my life have drifted away... I can't be that whiny co-worker that people avoid because they don't want to hear about all my aches and pains.
I'm already that annoying person that can't walk long distances or make definite plans because everything depends on the status of my spine.
I don't need a spine, right?
I really loved being at work yesterday. The last hour was hard. I did a lot of deep breathing.
But I made it.
I'm so grateful for having a day off.
But I was grateful yesterday to go to work, too.
It will probably hurt again tomorrow but I'll be proud to be there, too.
It really IS a pride thing... being able to act perfectly normal when I'm in so much pain that I'm biting my bottom lip hard to keep from crying.

Despite my ill-advised stint as an interior decorator... I love the new arrangement to my room. I haven't mastered the art of hot rolling yet but it's fun to try.
I want to get one of those ceiling mounted curtain rods to hang a little curtain over the closet area of my room, which is just a corner but it works.
I love my room and I'm glad to be back here where I am loved and rarely alone.
Austin spent the weekend with his dad, the first time in a really long time.
They need to bond.
I'm grateful that the father and his lady opened their home to my boy. He had a good time.
I'm not one of those divorced parents who play tug-of-war. I've always wanted my kids to have a healthy relationship with their father because kids should have two parents.
They're good kids and I believe they are a blessing to anyone who allows themself to believe they are.
It would seem that Austin felt welcome this weekend and it touches my heart. Whatever people do to my kids, they do to me.
Marquee started a new semester at school. She has a grueling class schedule. She's a smart girl and very determined. I believe this is her next-to-the-last semester.
Although she intends to get her doctorate eventually and be a college professor.
We support that kind of thing... my sister-in-law took a similar educational path and she is highly successful.
The men in my family tend to marry well.
The women, with the exception of my mama, not so much.
Mama picked a good one.
I've got two strikes on me so I'm mostly just avoiding the batters box.
In other news... I bought two new bras and a new pair of tights (I wear tights instead of pantyhose because the last longer and make you look thinner).
I also bought pumpkin pie poptarts, thus the need for slimming tights.
I also bought Jamie's birthday present, although it is late. I'm hoping to score some Jamie time on my next trip to the mountains... maybe take her to Waffle House, which she loves...
As does her Uncle Bryan.
My friend Whitney in Jacksonville is 8 weeks away from having her first baby. A girl who will be named Scarlett. Whitney sent me a picture of her bump... which is smaller than mine... and much cuter.
I adore Whitney. She has the distinction of being in a small group of people who love me enough to visit me in the looney bin. I will always love her for that. And for being my only friend in Jacksonville.
I'm addicted to www.zulily.com. I never buy, I just window shop. Or in my case, "windows 8 shop".
My mom is going back to work today. She's trying to retire but they keep putting off hiring a replacement for her. It's time, though. She can't see as well as she once could.
Grandma, my sweet Steel Magnolia, was in the hospital last week. There's a problem with her heart. They are seeing a cardiologist, this week, I think.
My parents got to see three of their grandchildren last weekend... Caleb, Madeleine and Joshua. It was good for their hearts... and it warmed my heart to see their pictures. I love those babies and pray every day that God will bring them into our lives more often.
So that's it. Happy Restful Tuesday, y'all. 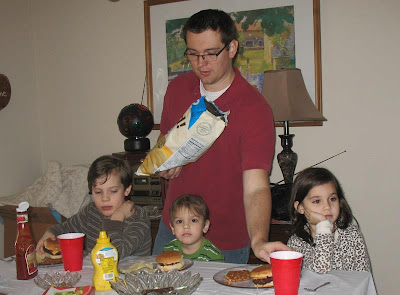 (Kids were not as bored as they look... they were watching a movie)