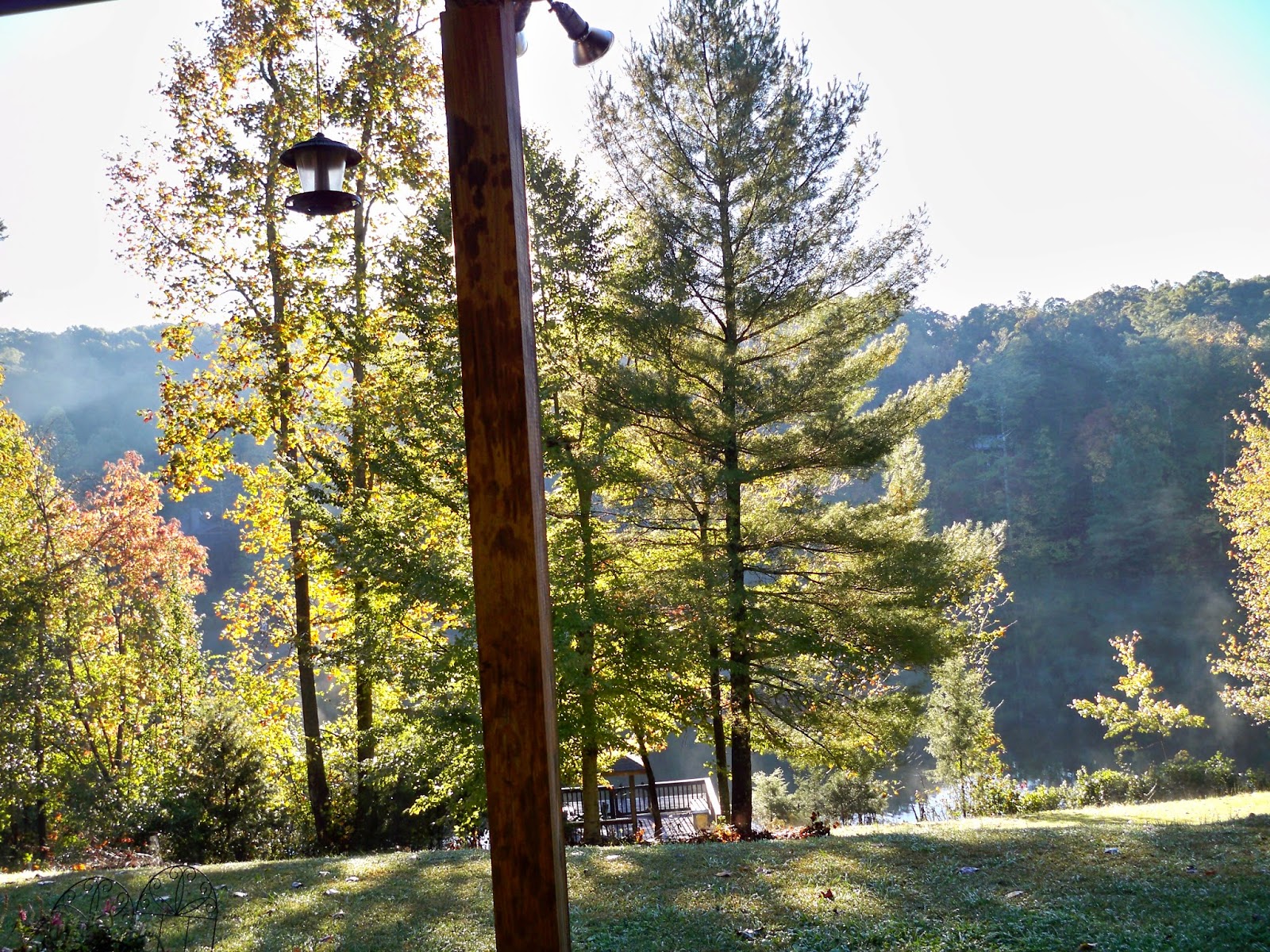 Yesterday morning. There's lots more color than my little camera can capture. It's a beautiful world.

Remember the blog entry where I talked about being a grandma? My fears about something happening to the relationship between Austin and Tasha? Yeah. Their relationship has really gotten rocky which has my anxiety ramped way up. Neither one is all right or all wrong. I've tried to keep the lines of communication open between them but we've had to put an embargo on overnight visits after a knock down/drag out hulabaloo at midnight the other night that resulted in a broken iPhone. She's hormonal. He has Asperger's. It's a dangerous combo. We're at 11 weeks, two days pregnant. You have no idea how stressful it is to want to be supportive to your kid, who really, honestly, feels overwhelmed... but to know that there's a baby involved who needs to know his dad and who I NEED to know. 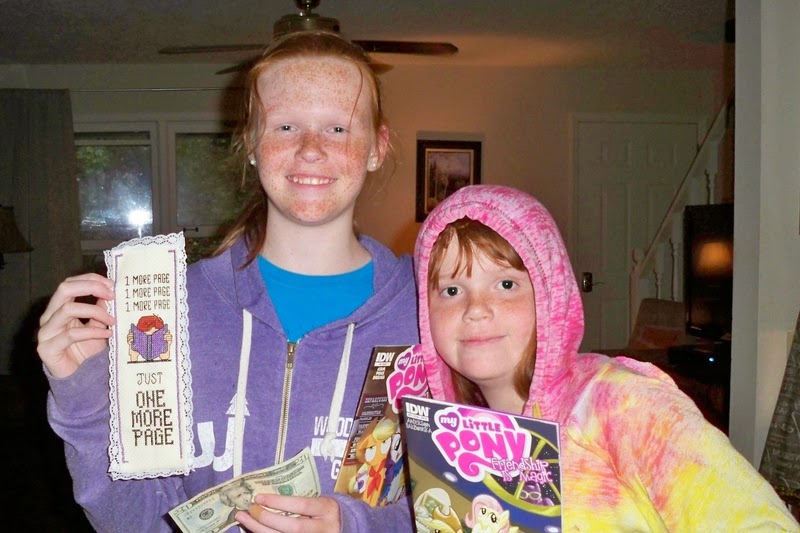 I've never gotten over - and I doubt I ever will - the estrangement of my youngest brother and his four kids. Y'all know what kind of aunt I am. It breaks my heart that those kids aren't getting to be a part of all the great times that I have with my two redheads. That brother was born when I was 14. Trust me, he was MY baby! And we just... we have such a great time with my nieces even when one is a sassafrass and won't give her "bibby" (what they call each other) the remote... there are no bad times with them. This picture is Sarabeth with her presents on her 12th birthday. Mawmaw made a cheesecake. I made a bookmark and she said, "how did you know? This is what I say every time I read!" How do I know? Because you're my niece. And I know you HAVE to be a bookworm. The My Little Pony books my parents found at an art shop last week. And the cash? Because... 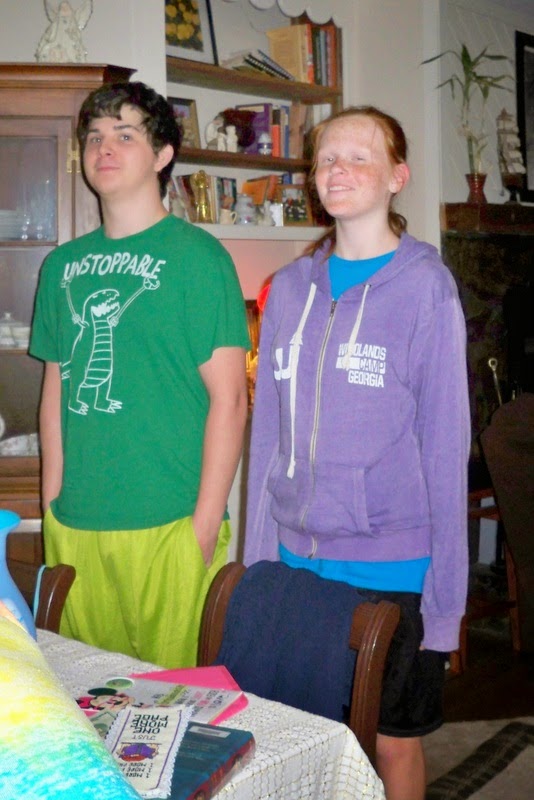 As far as my grandbaby is concerned,  I've been able to keep the lines of communication open with Tasha. She knows that she's important to me and that I'll do everything I can to support her. I've given her tips for handling Austin and encouraged her as much as I can. The way it's supposed to work is .... a couple falls in love... they get married... they set up a home together and plan to share that life with a child. They took a few steps out of order and are quickly discovering differing opinions about the kind of world their child will come into. I felt a huge, HUGE amount of anxiety when we did the ultrasound two weeks ago because the other grandma was very pushy with Austin (and me) about how "he did this" "it takes two to tango" "he needs to step up"  and how our family needs to pay for things because they don't have much money. Well, I haven't worked in a year and a half. What money my parents have is their LIFE SAVINGS that they planned to live on for the rest of their lives and they're already having their retirement home invaded by me and a kid.

Getting Austin to find a job - any job- has been the most frustrating endeavor of MY LIFE and baby mama's folks are telling him that a fast food job isn't good enough, that he needs to get a factory job, like, a month ago and he's just shutting down. The impression he's getting is that they don't want Tasha to have to work - ever. Tasha worked a day, didn't feel good and just didn't go back. That pushed Austin closer to the edge. I mean, the kid is really stressed out. And for me, nonstop Austin stress means the only time I get a break is when I'm sleeping. Cue full dose of ambien after a year, almost of being on a half dose. I just keep cautioning them both to not say anything that's going to jeopardize their ability to parent together in the future. And I'm trying to do the same. Above it all... I really do like Tasha and want her to have as little stress as possible in this pregnancy. Sometimes, though, doing the hard thing is what gives you the softer pillow to lay your head on at night. The road that looks the rockiest is truly the easiest path in the long run.

So I'm grieving the possibility of having a grandchild that I don't get to know, knowing how heartbreaking it is to have nieces and nephews I don't get to know and have I mentioned how stressed I am? Ok. I guess that horse is dead enough. 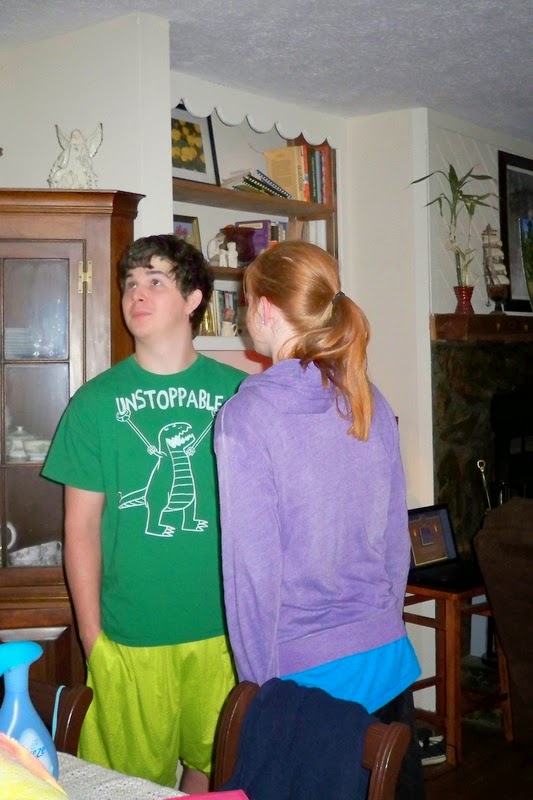 The picture above is Sarabeth showing that she's ALMOST as tall as her full grown cousin. They fuss and fight and tease each other like siblings. The other day there was a pool noodle sword fight. In my living room. We put a duster cloth on the end so that when it hit the wall it would also dust. This picture is her turning on him when he said something... Austin-like.

Time for me to get back to the needle - sewing needle. Cross-stitch... take me awayyyyyyy!

Happy Thursday. Love and hugs, y'all!

Oh Heather! My heart hurts for you. The joy of hearing a grand baby on the way and then the stress and anxiety of dealing with 'pushy'outlaws and waring baby parents would be enough to push me 10 steps back on the meds table as well! I hope the kids, given time, are able to sort their issues through and work it out, for the sake of all concerned but especially baby. And I hope 'the outlaws' realise the damage they are doing and just back the F off! Honestly, in this day and age I can't believe there are still people out there so narrow minded that think it was all so one sided in the conception department! And in this day and age both parents need to work. It's just how it is unless you win lotto! Good luck with that!
Hope things work out soon! Hugs from Oz...xxx