I Need To Blog More Often

I think this may be my longest gap in blogging EVER! No reason. Just living and not feeling the need to spill all my thoughts. Introverting, I guess. Let me see if I can remember some highlights of the past ten days or so.

I got my Ancestry.com DNA results back. I am 42% Irish and 0% any spice. Mom says there's Native American somewhere back a few generations. Not according to my DNA. I connected with a few family members and am still (a week later) just barely beginning to process the information. There's a relative who is very knowledgeable about the scientific aspect of the DNA and she had me enter my info into GedMatch and then make a list of all my ancestor's last names going back to around 1600. That's why I didn't blog Friday. That took FOREVER! And in the middle of that process my mom said, "are you busy?" which is Norma for "do something for me" and the something took way longer than it should have because I couldn't remember some key details but... whatever... I got that task done and then sent my Knowledgeable Cousin the list of surnames (I'll post it below if anyone is interested). She sent me this very detailed presentation of information that is so far over my head that I'm having to go back to basics of understanding DNA to even begin to understand what she sent me. However, her work gave me some great confirmation on ancestors that I wasn't entirely sure about. If you want to feel like an uneducated person, try to understand DNA science. 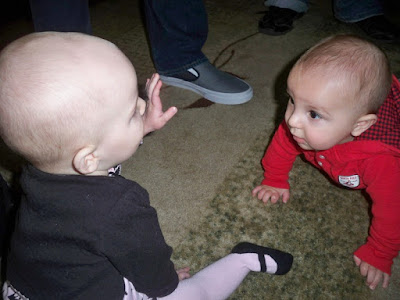 So that has consumed a huge chunk of my time lately, reviewing the DNA info and updating my genealogy research with what I'm finding. I've found another marriage between my Grandma's parents two branches of her family tree, which I think is very interesting. Both families, the Wards and the Bullochs were from middle / Southern Georgia but they were on opposite sides of the state - at least when my grandma was born. Back two hundred years prior they probably weren't so far apart. We know how grandma's parents met - they were introduced by a mutual friend. It will be interesting to figure out how the other couple from their branch of the family tree met, if that's even possible. Yesterday I spent a solid hour reviewing a "hint" on Ancestry.com about my kids' paternal line. There was a yearbook from their dad's dad's mom's high school with a picture of her in the Spanish Club. I thought... "how great would it be to find her class picture?" and I looked through every picture in the entire yearbook but I never did find her. I don't know why but she wasn't there. There are lots of rabbit holes like that in genealogy research but it's fun to follow them. 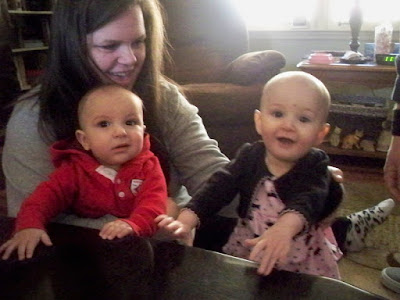 In other news... OLLIE CAME TO OUR HOUSE! He's six months old now and they got the ok from the pediatrician so they came up on Saturday. Marquee's birthday is this week so I bought a cake and Pop bought stuff from the deli and we just had a quiet visit. Austin was working (as always) and Tasha and Cosette had plans with her parents but they stayed long enough for me to get some cousin photos. It was nice to have time with Ollie where I could hold him as long as I wanted. He is such a sweet little cuddle bug. He is also lightning fast at crawling and freakishly strong. I kept calling him "Bam Bam" like on the Flintstones. I held him waaaaay longer than I should have but I just wanted to soak up as much of him as I could. It's easier for me to take pictures with both babies now that they are strong enough to stand and just need to be steadied. We are still working on the concept of "soft" so we supervise them very closely. They played together for the first time which was SO precious! I don't think Ollie had any allergic reactions. His mom did, bless her heart, but the only time Ollie seemed to rub his eyes is when he was sleepy.

It did my heart good to get to love on him but it screwed my back up so bad that something was impinging in my spine and making me dizzy. I spent the rest of the day trying to make the world stop spinning. I can handle the pain - I don't LIKE it but I can push through - but the dizziness was a whole new level of misery. I did a lot of things I know not to do like standing up and holding him and I've just got to be more cautious about how I do things. I just wanted to cuddle him as long as he would let me and he let me for a long time! 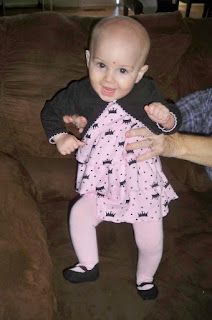 Cosette's little outfit was from a company called Little Beginnings and I bought it on Zulily. She was so cute in it that I bought two more similar outfits yesterday. The cost for the dress, little cardigan and tights was $11.99 so... SCORE! She has boycotted bows for now. She rips them off in a flash so it's not even worth bothering her.

Another interesting development in the past week or so... a local girl is going to school to become an Occupational Therapist and has to do a project where she partners with someone in the community who is living with a disability and she picked me! For 11 weeks she has to visit for a few hours, once a week, and observe the ways that I adapt to my disability - basically observe me in my natural habitat. She was one of my sister-in-law's students at Truett McConnell (the college in our town) and was very close to them, often stayed with them and babysat my nieces so it's not like having a complete stranger in my nest. She's an introvert like me so she gets my "boundaries" and she loves theater so we always have something to talk about. I hate committing to anything because I can never predict what I'm going to feel like doing but since she just does what I'm doing... it's a piece of cake. 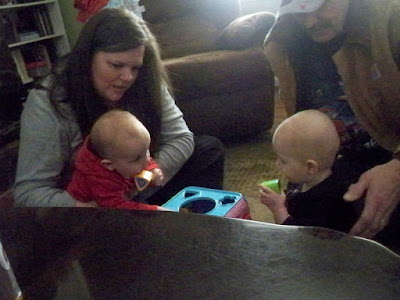 Last topic and then I'll close. I should really just write a little bit every day so that I don't have to post such long blog posts, right? I am having much anxiety about the election season that begins today with Iowa's caucus. There is not a single person in the race that I feel confident would be the right person to get our country back on track. Yes, Trump is a strong businessman but he is such a jerk. He'll have us in a world war in no time. Ted Cruz also comes across as a jerk to me. I would have to turn the channel whenever he comes on, just like I do with Obama. Marco Rubio doesn't seem to have the maturity for the job yet. Maybe in 8 years. I like Chris Christie but again... he's too confrontational. Don't even get me started on Hillary. There is so much crookedness in her life that it turns my stomach. I'm anxious about the lack of a good candidate and I'm anxious about the hate and bickering on Facebook. I like keeping up with my friends and family but I hate when people say things like "if you vote Republican you are a greedy waste of flesh" or something similar. Last election cycle a girl I know from theater said something to that effect and it broke my heart. It's ok to have different perspectives but it's not ok to insult people's intelligence or character based on their political beliefs. And for the record, I watch Fox News. I like Fox News. I like the people on Fox News. I also research other sources for my news and information so watching Fox News does not make me ignorant or uninformed. Every time someone insults Fox News, or the people who watch Fox News, I take it personally. It is personal. So yes, I hate election years.

That's it for now. Hope you enjoyed catching up. There are more pictures of the babies on my facebook if you'd like to view them there. I'll post the list of surnames from my family tree below just for those who are interested. Happy February! Love and hugs, y'all!