I don't think I had ever heard that term before yesterday. So when Dr Matt (my pain dr's assistant who I usually see) diagnosed my recent shoulder pain as a "frozen shoulder" I didn't know enough to ask intelligent questions. He said it's probably a result of a rotator cuff injury that went undiagnosed and the "freezing" happens due to scar tissue. I am one limping, steaming ball of scar tissue. Half of what's wrong with me is due to untreated stuff from the first forty years of my life. At any rate... he gave some suggestions for treatment for that and for the worsening arthritis in my hip... and I said, "treat me like you would have been treating me over the past four years if I had insurance".

So Matt scribbles stuff in my chart, takes it to Dr. Givogre to review and then we head to the receptionist in the "procedure" area. She starts working up paperwork and said, "I know I don't have to explain this to you..." pointing to my very thick patient file... and I said, "Um... maybe not... what exactly are we doing?" She said, "injections..." and I said, "can you give me the procedure codes for my research?". Because I had an appointment with Dr. Google as soon as I got home.

My first procedure is a steroid injection in my hip next Friday. All I know about it is that I can't have anything to eat or drink before hand and I have to have a driver. They wanted me to schedule the next procedure two weeks later but that was already an "appointment heavy" week so I scheduled it for March 18th. That one is an arthrogram on my shoulder... so it sounds like an injection while they look at what's wrong in it? I think? After they do that part then I'll either start physical therapy or schedule surgery.

The thing about the frozen shoulder - what I remember Dr. Matt saying - is that when part of it is frozen you start using other muscles to do the work that the frozen part would normally do which causes pain in other places such as back, neck, arm... and it causes weakness in the arm which has definitely been the case.

I'm posting this partly for my own memory and partly so when I say, "my shoulder is killing me" you'll know what I'm talking about. I just kept thinking it was sore from holding babies and doing other things that need to be done around the house and in the general living of life. Fortunately my mom got the all clear from her surgeon yesterday so she is doing some of the things she had been doing for me before like scooping the litter box which OH MY GRAVY hurts like the dickens! It's the left shoulder that's frozen and I'm left handed. I am so close to finishing my most recent sewing project and I'm having to do it in small increments.

In other news... I bought a Vera Bradley cross body bag on zulily and it came this week. I wanted something really small because I don't want to tote more stuff than I absolutely have to, especially when I'm toting a baby. I ended up with one that was just TOO small - no room for my phone, which was the main thing. I am not one to spend much on accessories but I had some zulily credit and it was on sale so it ended up only costing me maybe $5-10. I really love the pattern and the quality of this one, though, so I went on the Vera Bradley website last night and splurged on the larger sized (big enough for my phone) cross body bag. Cosette LOVES playing with my keys that I wear on a lanyard and was fascinated with the little bitty purse so I'll pass the little one down for her to play with whenever the larger one comes. 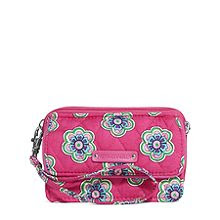 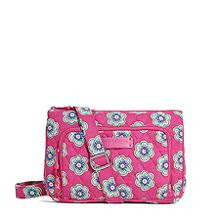 I took Cosette (and her mom) for her 9 month check up last week. She weighs 15 1/2 pounds which is small for her age (Ollie is about two pounds heavier at three months younger!) but the pediatrician feels like she's meeting her developmental milestones so he's not worried that she's gaining slowly. She has transitioned to more table food lately and is a pretty good eater. Her language is better developed than it should be at this point - she says, "mama" and "dada" and "nana" and "kitty kitty kitty cat" and "bye" and "hi" and signs "want" and waves goodbye. She's a little sponge. If you show her how to do something she picks it up quickly and remembers it. She fell out of her high chair last week onto our very hard tile kitchen floor. I ran up to check on her and then brought her down with me to keep her awake for awhile and to make sure she wasn't foggy. She remembered where Raggedy Ann's nose was and how to lift the Frozen dolls hands to make them sing so I felt that was evidence that she wasn't in an altered state. The doctor checked her out good at her check up the next day and said she was fine. Moral of the story: restrain the baby because she is a little spider monkey!

I have a dentist appointment scheduled for Monday, if the weather isn't bad and then the hip thing on Friday so next week should be FUN! Or not. I'm introverting hard this weekend to prepare myself for the trauma and also because I don't feel good and my everything hurts. Stay warm and enjoy your weekend. Love and hugs, y'all!