I have a confession to make. I don't watch videos when people post them in their blog. Sometimes. Rarely. Usually because I keep the sound off on my computer because I play(ed) those games continually and always had one of them on in the background and they all have insanely annoying music. If it's someone's kids or pets, I'm more likely to watch. If it's just some random video of your favorite rock group from 7th grade... eh, notsomuch.


So, being a complete hypocrite, I'm posting this twenty minute video and asking that, as a personal favor to me, you watch it all. The title of this video is "Is She Crazy"... it's the Preacher Lady of Riverdale. If you don't watch it, the rest of this blog entry will not make as much sense. I know you're busy. Watch it anyways.

A little background. I grew up in Riverdale, Georgia, on the south side of Atlanta, in a county that includes the bustling Atlanta International Airport (which is now called something else but I forget the proper title - it doesn't really matter) In my childhood it was the kind of town where kids played outside until the porch lights came on and we walked most everywhere we went. My grandmother who passed away in 1998 never owned a car, never had a drivers license and she lived in Riverdale for the last twenty years of her life and walked to the grocery store... walked to the "old folks home" where she volunteered... That's another great story but my maternal grandmother volunteered at a nursing home and would go every day and take care of the "old people", one of which was a lady who was her teacher when she was a child back in Mississippi.

Riverdale was the kind of town where the junior high cheerleaders and football players would walk to the pizza restaurants on the main highway after football games and sometimes would even walk home afterwards. It was safe. Most of our parents worked for the airlines or at the Ford plant just up the road. It was a comfortable middle class suburb with little subdivisions full of ranch and split level houses.

Time and the economy have not been kind to Riverdale or Clayton County. My parents still live there but now they lock the door during the day. We didn't do that back when I was growing up. A teenager was shot in a driveby shooting the other night - on his own front porch. There are more pawn shops, check cashing businesses, thrift stores, buy here/pay here car lots and such than we had in the day. A lot of the things we grew up with are long, long gone. My friend Mary and I commiserate at times that we can't really go back home because the town we grew up in no longer exists. I imagine that's the case for a lot of people.

Our high school class hasn't done a good job of having formal reunions but we do have a strong, close presence on Facebook. Yesterday I caught this video posted by two friends of mine on Facebook. As I mentioned, I don't watch videos that other people post but I enjoy the two girls who had posted it and I suspected that what was moving to them might be moving to me as well. I watched this one. It's about a lady who goes and stands on the main drag of my old home town preaching the Word of God day after day after day. She speaks in a loud voice. She doesn't worry about offending others. She reaches out to people, prays with people, waves to passing cars, she praises God. RIGHT THERE ON THE STREET!

I will tell you that I am not afraid of the Gospel of Christ but truly, I am not bold enough to so much as lean in to a hurting person and whsiper, "Do you know Jesus?". I will offer the typical, "you're in our thoughts and prayers"... I will sprinkle little non-offensive pleasantries without truly engaging others or opening the door for an honest, open, real discussion about THEIR spiritual needs. I pray faithfully for others but oh, so, very rarely evangelize. What good is an Evangelical Christian who doesn't evangelize? I root myself in polite Christianity but never really use it for much more than my own good.

My church sends forth a lot of missionaries... both full time and part time, hard core, one hundred percent unafraid soldiers of God who go into deepest darkest Africa, Thailand, Ukraine... spin the map, pick a place, we're probably represented there. We even have a girl who is in one of those scary mideastern countries where women have to wear burkas and you get shot for being a Christian. It's such a scary place that we don't even name the country where she is... we just list her name and ask for prayer.

We go all over the world but we... me... I... a lot of times... most of the time... hardly ever... would have the courage of conviction to stand on the street corner talking about GOD. We will hang those goofy flags supporting our football teams... we will be openly passionate about things that don't really matter in the long run but we don't want to OFFEND anyone by talking about God. Not just the street corner... the virtual street corner. How many of us are bold enough to ask that person we share gifts from our zynga games WHERE they are spiritually? How often have you ... me... I... stopped short of really challenging people to think about their relationship with God?

We accept the platitude that I am guilty of spouting myself where we say, "I am spiritual but not religious". It's not about religion. It's about relationship. Believing that there are "spirits" out there is not going to help you in the after life and I DO believe there is an afterlife. I believe that there is so much more than this world. How different would our lives be - and the lives around us be - if we put aside our polite Christianity and stood firm and bold about our faith? Why not be willing to allow people to wonder if you're crazy?

I am feeling tons better. Yesterday Austin and I went to Walmart to get his hair cut, went to Jamie's birthday party and I spent more time away from the nest than I have in a long, long time. I am still not able to eat much and I still have some soreness but the weakness is giving way to strength and I am encouraged that I will be back on track this next week. That extra week made all the difference in the world.

I didn't get a lot of pictures of Jamie's party because I did try to stay in one spot in a comfy chair. There were a lot of kids going in a lot of different directions and I wanted to avoid a collision so I sat still. Here are a few of the pictures I took... 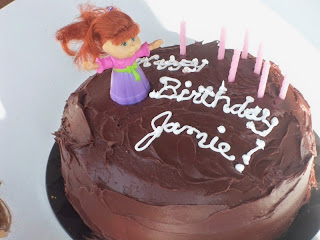 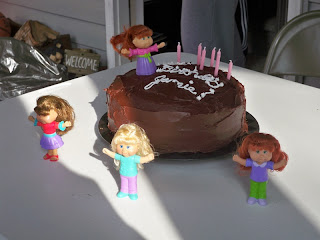 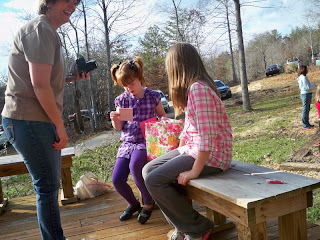 So that's the haps this Sunday morning. I'm gonna run out and enjoy the mountains for a little bit. Hope you have an awesome day!