Got Anything To Be Thankful For? It's Thankful Thursday, Y'all.

I'm back on the late schedule for work today and tomorrow - I work from 11:30-4:30.
They always ask which schedule I prefer and I (honestly) answer that both have their benefits and drawbacks.
Late means a slow morning so I can sort of ease into the day. That's helpful on cold mornings when my joints don't want to cooperate.
Late means there's no scraping of frost off the windshield.
Late means seeing most of Fox and Friends (I was still asleep when it began today!) and watching Live with Kelly and Michael if they have someone on who is interesting.
Early, though, means less traffic on the way home.
Early means being able to take my pain meds earlier, if needed, which results in less suffering.
Late means running errands before work.
Early means running errands after.
Late means longer to glam in the morning, if I so desire.
Early means a ponytail usually.
Either way... there's usually a stop off at Dunkin' Donuts, Starbucks or Atlanta Bread Company for a beverage and a snack/meal.
Yesterday it was Dunkin' Donuts since they have a drive-thru, it was too cold to get out of the car.
Our local Dunkin' Donuts is such a well-organized and friendly place. They always optimistically say, "see you tomorrow". I love that.
We also have the option of Krispy Kreme, if you desire a breakfast of hot sugar and grease that dissolves in your mouth without chewing. Occasionally, I do.
The doctor's office called yesterday and said that my cholesterol was up, they're increasing my cholesterol meds.
Guess I should keep Krispy Kreme off the rotation for awhile.
I need to research anti-inflammatory foods, cholesterol busting foods, etc and I need to put them on the shopping list or go shopping myself.
Pop loves (or doesn't mind) shopping and it's usually painful for me.
I do it when I have to but don't mind missing it.
They're expecting ice in the mountains tomorrow and I would love to see it and take fabulous photos.
I would hate to slip and hurt myself, it could be devastating.
I worry about my goofy, unsupervised adult child up there.
I haven't mentioned...  I was five hours out of town when he had his first "financial emergency" and needed to get the cash I left at the house for him. For emergencies.
He said it was to pay for gas for his friend to take him job hunting.
I believe it went to more nefarious things.
I demanded receipts of how the money was spent or there would be no more donations to his carefree lifestyle.
Hand up. No hand outs.
I got reprimanded at work yesterday by my boss (who I love, I really do, best boss I've ever had. He's such a great guy that none of the employees grumble about him behind his back and that's never, ever, ever happened for me. I've always been in work environments that involved lots of complaints and mocking and so on, except in Florida. Everyone loved Kathy.) *end suckup*
Anyways... corporate audits our social media presence and I had posted something that violated their rules so I had to delete it. Boss thought what I put was a great idea from a marketing standpoint.
It creeps me out in a very small way that there is such supervision.
However... my blogging style is bold and honest and sometimes I share more than I would share in person and sometimes that's not the best way to be and sometimes that is a great thing as it opens the door for conversations that I wouldn't organically initiate in real life. It provides a pathway into relationships that would not otherwise exist or be nurtured.
It takes courage and humility to be transparent and it's hard at times but the rewards far exceed the drawbacks.
Yesterday at work was difficult from a pain standpoint. More than usual. Still a little weak from the illness of the past week. I kept thinking that I would have to leave early but I just kept working and the time passed quickly.
I love my job and I love my co-workers. There are a lot of different personalities but this is a much more mature work place and you can really tell a difference. It also makes it easier to do my job because everyone  works toward the same goal, the same end - it's not competitive, it's an encouraging, supportive work environment.
It was hard to leave the mountains this time because I left my heart up there.
When I was running errands on Tuesday morning, it felt very comfortable, just like when I lived there. Going up on the weekends you get the tourist experience and that's fine, except for traffic.
Being there during the week reminds you that you're living in a community that cares.
People use blinkers, hold doors, say good morning and wave, even if they don't know you.
They assume that you're a friend because there's only about a degree and a half of separation. If they don't know you, they know your mama'n'em.
They post on the community facebook page that somebody saw a stray dog north of town and someone posts that it's their cousin's dog and goes to get it.
I love that place.
I think it's a great, awesome work of God that He put me in a workplace that I would enjoy enough to push past the pain. In a place that was such a good fit that I wouldn't run away when I need to chase my heart and make sure he's safe and settled.
It was a great work of God to put me in a place where I had great relationships here, much support and human interaction- and animal interaction.
Because this is what He ordained for this season of my life and I am grateful.
Tuesday I saw this fella at the mountain house: 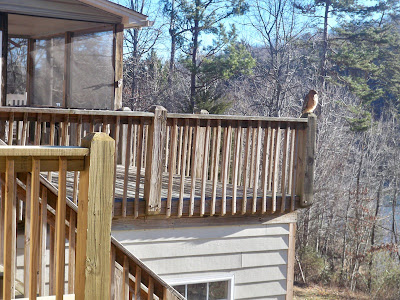 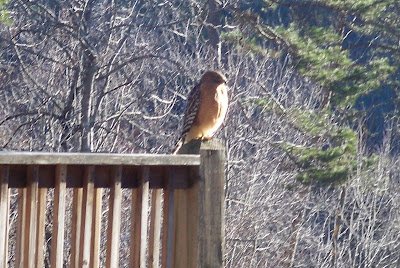 Any idea what kind of bird this is? He was big and completely not intimidated by me.
Yesterday I had to stop at the pharmacy. I have to go there again today. They're nice there but slow.
Seven prescriptions filled in two days. Pharmaceutical companies love me.
It's Thursday.
You got anything to be thankful for?
I do.
Love and hugs, y'all.