Remember those two epic fails from yesterday? I wrote the blog entry too early. There was more fun yet to come.

We had torrential rain yesterday - I'm talking about rain so heavy that we couldn't see across the lake. And while I appreciated the fact that the rain was lowering the steamy, miserably hot temperature (not that I went outside at any time, mind you...) ... I did not appreciate the rain coming in my bedroom windows. POURING in my bedroom windows from the water overflowing from the gutters that we THOUGHT we had cleaned out sufficiently to prevent this from happening. Epic fail number three. Fortunately, I didn't have anything near the windows, just my big stuffed animals so we just took down the curtains and lined the window with towels to catch the water as much as possible. 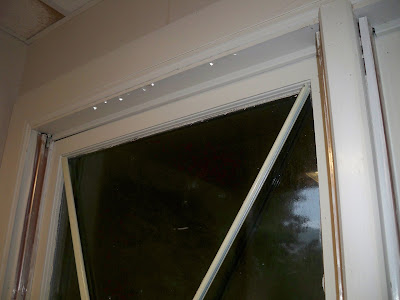 We have towels blocking the leak in Austin's room (that we thought was fixed but the heavy rainfall proved otherwise)... we have the towel at the base of the stairs where the water seeps up through the carpet, apparently from some sort of foundation leak... and now we have the towels catching the water in my room. Honestly, this didn't frazzle me too much. We just made sure the bed wasn't getting wet and nothing electrical was getting wet. The only things in my room besides the bed and the night stand are in rubbermaid tubs that are closed and hopefully water-resistant if not water proof.

My parents bought a warranty on the house for these kind of maintenance issues that wouldn't fall under their homeowners insurance. A sudden discharge of water (like a pipe bursting) would be covered under insurance but leaks are generally not. We've just got to find us a good leak-stopper guy. I know there's a better term for it but it's beyond me at this point.

So the window waterfall was epic. Then there was this...

I started having this sharp pain in my left hip/left side about a week or two ago. Last night it grew so painful that I couldn't sleep. I was "labor breathing" my way through it. I read - and finished - my Alfie Boe biography (it was fabulous!) and when I finished that it was 3am and I was nowhere near being able to sleep. To make it worse... I would get into a semi-comfy position, the only comfy position, curled up on my right side in sort of a fetal position... and I would just about breathe through the pain enough to get my mind off of it and my precious Little Trouble Kitty would come and LAY ON MY LEFT HIP! Arrrgh! When I would reach up to try to push him off he would slap my hand away with his claws out. And then he would purr his rotten little self back to sleep. He didn't want anything coming between him and his mommy, not even his mommy.  It was crazy. I dozed off and on a little bit but then the kitties woke me up at first light wanting to eat. 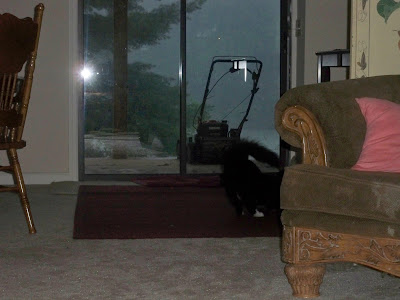 I dragged my aching body up the stairs and the kitchen was a disaster! Austin and Logan had fallen asleep doing their Xbox thing and had apparently had about four dinners between the last time I was upstairs and the morning (this time it wasn't stuff I had bought, fortunately!)  Austin heard my ... um... exclamation of frustration... and jumped right up and started cleaning and I said, "no... no... it's ok. Just leave it. I'm not ready to be up yet anyways. Just please go upstairs and get my pain meds for me so I don't have to climb the stairs". And he came down with the wrong meds so I still ended up going upstairs and I just went ahead and got dressed for the day so I didn't have to go back up again later. I knew it was going to be one of THOSE days.

I went back to the Whine Cellar and settled in my cozy spot on the loveseat and waited for the drugs to kick in so I could sleep. The pain eased up but I never did get to sleep. I just started browsing historical costume sites and passed the morning quietly with the sleeping cats... who were apparently tired from harassing me all night. 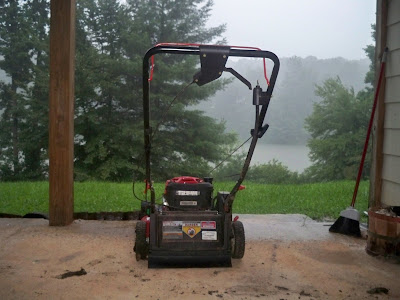 A little bit after 11am I heard the vacuum going upstairs. Austin and Logan completely cleaned the living room and kitchen, took out the trash, started the dishwasher... without any encouragement from me. It's so nice to have people just realize what our environment SHOULD look like and doing their part to make it happen. I don't want to be a nag but if it's not done I'm not going to ignore it and on days like today, I couldn't do it FOR them. I couldn't convince them to scoop the litter box, though. Man, I hate that litter box.

I should mention that the strike has somewhat ended and Austin has at least attempted to do some of the tasks on his to-do list. He hasn't fixed the boat yet. That was a biggie. And he had an Epic Fail of his own trying to repair the lawnmower. He got so frustrated with the lawnmower that he threw a tool (I don't know what it was because I don't do tools) so I told him to give it a rest and go get whatever the thing-a-ma-jig was that he threw. He hasn't done the weed-eating yet but we're back in that rainy cycle where things don't dry out before it rains again. I don't know. I would prefer "gainfully employed and cheerfully cooperative" but I'll settle for relatively helpful at this point. The bar is low. 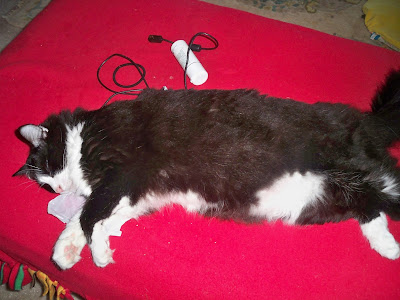 So my Sunday has consisted of a lot of PBS watching and a lot of internet surfing and still no sleep. The boys went into town to hang out.  We had another hard rain but only for a brief time. I traded my "rights" to the upstairs tv for the boys cooking dinner and emptying the dishwasher. They really do enjoy the Xbox on the big tv and heck... I can't give my kid a car... or a dad... or say the right things to get him motivated to do the right thing... but I can make sure him and his bestie are safe and sound and having a good - legal - time.

I'm half asleep and I pray this will be an early bedtime. I think I've talked about this before... your body does a lot of repair work while you sleep.... and if you suffer from chronic pain your body already has a lot more to do in those sleeping hours. If you miss a night's sleep it begins a domino effect of increasing pain and decreasing ability to sleep. It's not a lazy thing, it's a survival tactic. I know if I don't sleep things get bad fast. And trust me, they were bad enough last night that I was at my highest level of pain tolerance.

You know how when you go to the doctor or the hospital and they ask you to give them your "pain number" on a scale of 1 to 10? I started out waaaay too high at the pain doctor. I started out at the top of the scale and there has been much, much worse pain since then but I don't have anywhere else to go.

My dinner is ready: fish sticks with homemade tartar sauce and velveeta cheesy shells. Mmmmm! Good! Have a great evening! Love and hugs!