This week I'm going to look at what happened on this day, July 5, and the day before July 4th in my blog history. These have been two very memorable days in my life. Last year on July 4th, my dad went to the hospital to see my mom who had been in the hospital for the past few days. She had been very sick but mentally fine. That morning, July 4th, changed everything. From that point on we only had brief glimpses of who my mom used to be. I can remember one day when she seemed particularly clear and I tried to hurry and talk to her about everything, knowing it could be my last real conversation with her. It was.

In July of 2015, I was enjoying tiny baby Cosy and looking forward to Oliver's arrival. This year the highlight of the month will almost surely be Oliver's birthday party on the 21st. It will be Cosy's first ever visit to Oliver's house and her longest road trip. I'm so excited to be there for his party this year. Last year my mom was so unwell that it was impossible for me to travel that far away. Instead I gave him a little party at my house for the family up here. It will be nice to go to his party (and also to not have to give  a party!) this year. 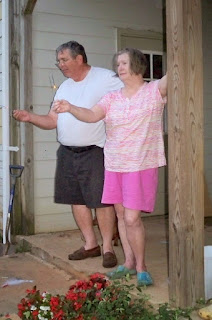 The post summarizing my 4th of July in 2014, didn't go up until a few days later. Cody and Marquee and their friends had come up for a visit. They had a nice swim in the lake and we did fireworks and sparklers and it was just a nice time with friends and family and friends that feel like family.

On the 4th of July and 5th of July in 2013, we were growing mushrooms in our front yard. It was a very wet Summer, our first full Summer up here. The basement flooded frequently. My level of frustration was pretty high but at the same time... life was much easier since I had recently stopped working.

On these days in 2012, I was at Grandma's house in Hayesville, North Carolina, staying with her until it was time to move her to Assisted Living. She went through a lot of emotions that week and it was... rough. The whole process went much more quickly that I had thought it would but I feel proud that I was able to spend those days with her at the end of her time of independence and help her say goodbye to the people and places that were so important to her. It was hard.

Probably the hardest 5th of July I ever faced was the one in 2011. I was at work and I received a call from Austin letting me know that the house was on fire. Our little duplex had been struck by lightning and caught fire. The next two weeks were hard... some of the hardest days I had ever lived through at that point but in the end, we were ok. A lot of special treasures survived the fire. We survived the fire. The cats survived. I had renters insurance (it's so important! If you're renting you really NEED it!) that paid to pack up all our stuff, clean it, salvage what was salvageable and move it to our new apartment. I felt very, very blessed throughout that whole process. It was not easy but having renters insurance made it bearable. The fire is covered in blog posts that you can access by clicking here and here. 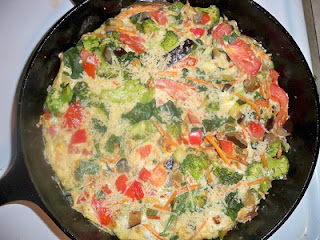 Looking back at 2010, I was talking about losing weight and what was different for me in that weight loss effort than previously. You can read my posts here and here and here is a fabulous recipe for this really yummy frittata. Now I need to make a frittata this week!

AND... the oldest blog post I have for this day is from 2009 when I had just had my wisdom teeth removed. It's short and sweet but if you'd like to read it (and your fabulous comments!) you can click here.

Hope your 4th of July was amazing and I'd love to hear how you spent it this year... and what was your most memorable 4th of July?