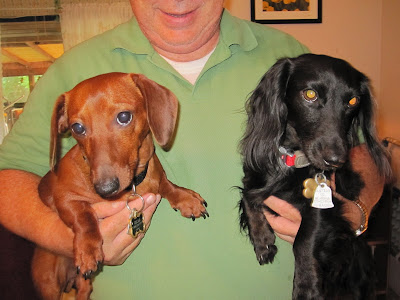 I snagged this picture from my mom's facebook... this is Pop with his buddy Oscar on the left and his great-grand-puppy Sammy on the right. Sammy belongs to Cody and Marquee. Oscar was supposed to be Sammy's "brother" but he ended up as Pop's dog instead. Who could help but love those sweet faces?

Bubba came yesterday and hung curtains, my doll shelf and was going to hang the coat rack but wants to brace it on another piece of wood so that it will be able to hold a few heavy coats. That little bit of progress made me less compelled to unpack boxes... the doll shelf never got hung at the last place we lived so just having that done makes me feel light years ahead of our previous state of "settled". As long as I'm making progress... and come to think of it... some of the boxes I haven't unpacked never got unpacked in my last few moves... so they may just need to go on a closet shelf somewhere anyways.

Austin was in a bizarre frame of mind yesterday. I'm blaming the "back to school" adjustment period. He was alternately really sweet and cooperative... and defiant and moody. I actually lost track at one point when he came out of his room. I couldn't remember which side of the coin we were on... I just waited for him to start talking. He's an odd one, that kid.

His senior portrait appointment is set for Thursday afternoon. Nothing beats short notice, right? Of course... if they had our correct address I would have had it a few days earlier. They encouraged the kids to bring "props"... I explained to Austin this meant something that might signify his high school years... like an athlete might have a football... he said, "how about a bong?" Half of you laughed and half of you cringed. I landed at some sick crossroads of the two. I said, "did you say your BIBLE? Yes, that's a very good idea".

He's planning to go to the Homecoming Dance with his girlfriend and she has planned his outfit... which he described as "black khakis and a black button up shirt"... I said, "khaki is a color... " He meant black dress pants but I guess the only dress pants he's ever really owned were khakis so he thought that was what they were called. Sort of like "jello" and "kleenex"... or is that a colloquialism? Do people outside of the south refer to tissues as kleenex? Do people outside of Georgia refer to sodas as "coke" regardless of the color or flavor of soda? Is it "gelatin" regardless of the brand?

Lish the cat continues to be absolutely terrified of Austin. at the very hint of his doorknob turning, Lish turns tail and hides under the bed. He tried to bribe him with fresh catnip yesterday but Lish was having none of it. on the flip side... Lish seems to think he's my siamese twin. He stays glued to my side... he even sat beside me last night to watch Marley and Me. He was scared during the barking parts and cuddled closer to me. He's also scared by the sound of car horns. That's another odd one.

I had waited all this time to see Marley and Me and it was worth the wait. What a sweet movie! I won't recap because I don't want to spoil it... if you haven't seen it, check it out!

Austin seems to be really settled into the neighborhood... I had no idea how "neighborly" he could be. I am friendly but ... I'm not exactly the kind of person hanging out over the gossip fence. Not that we have any fences... Austin is always sitting on James and Maribel's patio next door.... chatting back and forth with Ellen above us... he came in with a plant cutting with instructions of how to start roots in water and then transfer. She's the one who gave him the catnip, which we refer to as "Kitty Crack" because Stubby goes into what can only be described as a moment of pure ecstasy when he smells it.

Child support is late... which is a bummer because I really need to make a grocery trip for a week while Austin is around to go with me. It's so hard for me to come home, pick him up and head back out... I'm too tired to shop after work and can't pick up much by myself. We've done well throughout the move... I managed to handle all the deposits and downpayments and replacements and have all my bills paid, I think (there's a question about whether or not the satellite is bundled with the internet provider, one billed separately and one billed for both and I paid the bill that had both)... with my income + insurance + some financial blessings. I'm really proud of that... and feel very blessed to have been able to. I feel the tide turning for us financially.

I may stretch the budget a little bit for the second half of the month by buying a dryer but it's an absolute necessity. I wasn't counting on stretching minus child support... so hopefully he'll come through. You just never know. We picked up enough stuff to get us through the next couple of days but I didn't have the budge in my budget to handle a full week. Argh.

At any rate... slighly under 22 hours left of my weekend... gonna get back to doing nothing...
Love and hugs, y'all!

Sounds like Austin is at a difficult time in the growing up process. I wonder why the cat is scared of him. Up here we drink soda unless it is a specific brand. I call gelatin Jello regardless of brand. Tissues are tissues. I have been trying to budget money but it is tough. I might have to apply for food stamps again.