Contentment is Born of Struggle 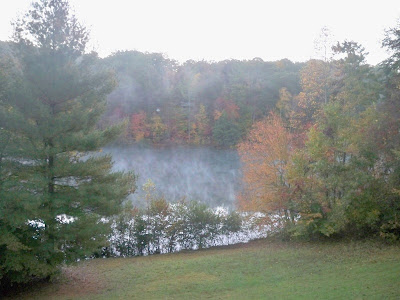 I know that our little corner of this planet is by no means the most beautiful view anywhere... but yet... when I look out at first light and see this.... I can't imagine anywhere I'd rather be.

I would love... so very much... to wake up to this every morning. And I trust myself enough to believe that I would never come to take it for granted. Even though my struggles were many and mighty while this was my full-time home and I had a full-time job... the beauty that surrounds me here in these mountains was never wasted on me.

I have spent a good part of my 44 1/2 years on this earth trying to stretch myself to be who I thought I was supposed to be. I got married, had babies, bought a house, joined a church, got the kids involved in everything from Boy Scouts to Little League to dance class and ran around like a chicken with my head cut off, trying to make it all fit in my life and make me fit in all of those roles while trying to keep the bills paid and the lights on and a car in the driveway. Once I became a single mom the work load doubled and I had to add "find a man" to my list of things to do. I sit here now... in the stillness... listening to the birds singing outside and I feel, more than any other time or season or stage in my life, the most complete I have ever felt. I have so much less than I once had and yet it feels like so much more.

I'm not sure you can get here... to a point of contentment... without having been there... in a place of struggle... I know a lot of people for whom things have come much easier but I don't know anybody who is content just because of the amount of money in their bank accounts or the stability of their relationships or their job title... I believe contentment is born from struggle.

I spent my whole life thinking that unless I had a significant other, my life would be insignificant. Other than giving me three amazing sons, having a mate never served any valuable purpose in my life, in actuality, they all added a dimension of struggle, another layer of conflict and disappointment that I shouldn't have ever allowed to enter my life. I know for some people it's different. I believe that healthy marriages and stable families are the backbone of our society and I'm glad there are many such situations that surround me. But I don't believe that single means lonely.

During our drive up yesterday Austin and I were discussing Purple Michael and how excited and delighted we are that he is going to be in Atlanta for a few months. Austin talked about texting Michael... and I told Austin that there was a day recently that Michael was having a particularly hard day and had received Austin's text and been particularly touched by the reminder that although he's never been a biological father, he has truly fathered many children, including mine. Austin has been in Atlanta with me for the past week. His biological father has been *right next door* twice a day, picking up Cody for work and dropping him off after work and he has never made any attempt to see Austin. It bothers Austin... but he admitted yesterday that he would be more offended if Purple Michael was nearby and didn't attempt to see him. He's the one who invested the most into Austin's life. He said... "He's like a mother to me".

That conversation evolved into a discussion about the other people who have influenced Austin, from teachers and youth leaders to uncles and his Pop. I would have loved to have stayed married and raised my children with the man who gave them life... but that man wasn't willing - or maybe he just wasn't able - to fulfill that role. Yet the role was filled in many wonderful and diverse ways.

Likewise, my happily ever after never happened. The ones I married didn't love me and the ones I loved didn't marry me. And although I could easily list the material things that are missing in my life (a retirement account, a newer car, a home of my own, etc) I am so incredibly content... drinking my cup of very strong coffee... looking out at the mist rising from the lake... basking in the perfection of a four day weekend... my life is good, y'all.

Hope yours is too. Love and hugs.