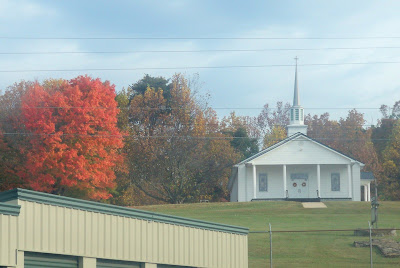 We had a quick trip to the mountains this weekend for Sarabeth's birthday party. She's ten! How is my girl ten?

I had a migraine on Friday and I was worried about my ability to drive... it's a hundred miles... so, not terrible... but it COULD be quite miserable if the headache struck again. It hasn't. My left eye is weak and keeps watering so I drove home today like a pirate... but there was no traffic so it wasn't bad. Austin gave me a little back up on changing lanes and so forth and I was eager to get back home and in the nest so I could start my obsessive pending doom watch with the Hurricane taking aim at the U.S. 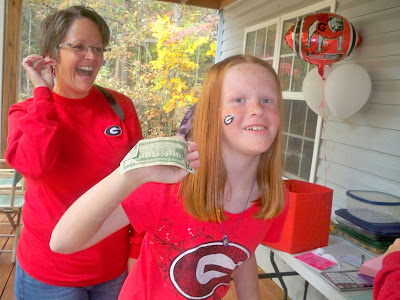 S.B. had a great party... a Georgia Bulldogs *eyeroll* party... which, I suppose, was inevitable. Her mama went to Georgia... and Sarabeth's nursery was decorated in a UGA theme so she's been surrounded by that...um... influence... all her life. In this picture she's wearing the shirt I gave her for her birthday... I drug Cody, Ryan and Marquee to five different stores searching for the exact style I wanted for her... I wanted something that LOOKED like a girl's shirt and this  one was from the Alyssa Milano collection at J C Penneys. (the cash came from Mawmaw and Pop, not from me). (And, by the way, doesn't my sister-in-law look gorgeous in this picture? Love her so much!) 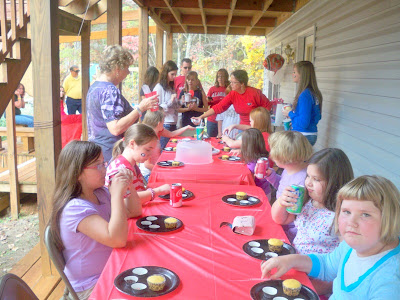 As usual, we had her party on their front porch... the weather was gorgeous... we had a good turn out, lots of sweet little girls and a bunch of family and friends. I'm always excited to see the little girls that have been a part of Sarabeth's life for most of her life like Jessalyn (whose dad went to church with us when we were kids) and Jorjanne (who I always factor in when buying surprises for the girls, I buy in threes, usually!) and it's fun to find out who Sarabeth is hanging out with at school. Her sweet friend Camden gave her a necklace... they match and say something like "best friends forever" or one of those sweet sayings that little girls should always have when they're about that age. 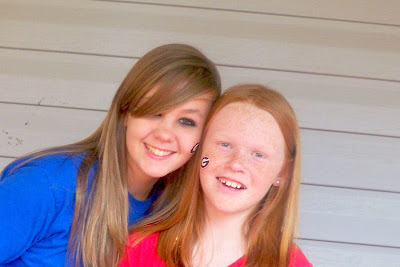 And we love seeing my sister-in-law's family... here is Sarabeth's cousin Hannah, who just gets prettier and prettier every time we see her. Notice those "circle -G" tattoos on everyone's face? That was my job. And proof that I love my girls more than football rivalries, which, in the south is a pretty big deal. Yesterday was the annual showdown between the University of Georgia and the University of Florida. Although I don't take things as personally as I did back when Tim Tebow was quarterback... I'm still a Gators fan. I tried telling the kids that the tattoos would come out better if they would say, "Go Gators" while I pressed them on. No takers. And the Gators lost. 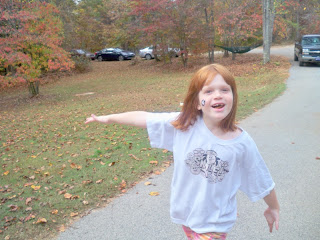 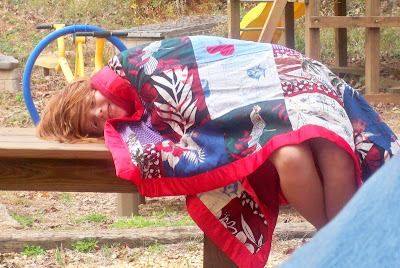 to this... by the end of the day. This quilt was one of several they had made out of Gramps' old shirts. This was our first birthday party without Gramps, who passed away this past Spring. We missed him but I know he's watching over these girls still. 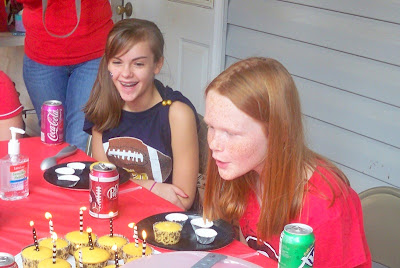 I love this picture of Sarabeth and Jorjanne (who is wearing a Georgia Tech shirt, not because she's a Tech fan but because she's an instigator and I love that she's growing up with that sense of humor!) 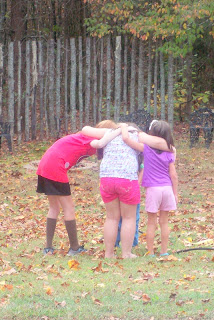 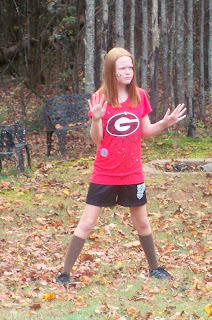 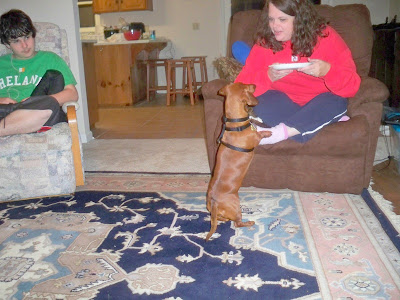 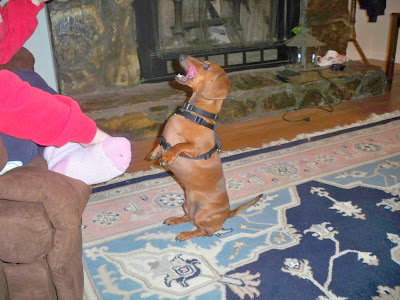 We played (they played) some games... and it was just a really good day. A good day to be ten. And then we went back to the mountain house and had dinner... and then early bed time for me... the Pirate drive home and I've been tucked in the nest resting up for the week ahead. 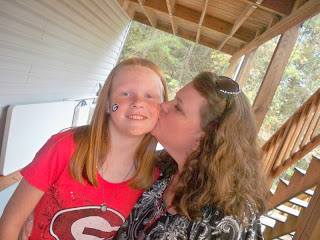 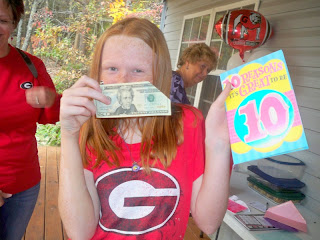