It's the third day of a three day weekend and I haven't recovered from my measly little four day work week in the way that I had hoped. I spent most of last night tossing and turning and trying to get comfortable. I finally got up at 4am and sat in the recliner which, for some reason, is more comfortable than the bed.

Since I've been hibernating all weekend... other than two trips to Rite-Aid for some essentials (chocolate and my daughter-in-law's birthday card & present)... the only pictures I've taken are animal pictures.

I've mentioned before... we have three cats- two are mine and one is my parents'- and three dogs, the two "old girls" who are both around 12 years and Oscar the spoiled rotten dog who will die without body heat. My granddoggie Sammy stays with us while his mommy goes to school. We're not at the level of animal hoarding that would rate being in the news or on a show on Animal Planet.... and my mom is diligent at keeping the litter boxes clean and the fur vacuumed up... but to spend much time here you must. love. pets.

Anyways... here are some pictures that show how Trouble got his name: 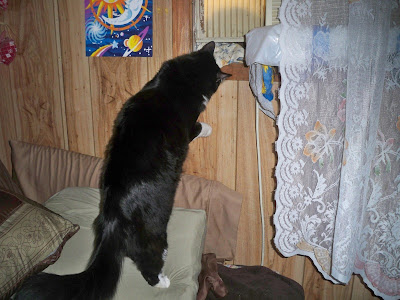 Trying to tunnel through under the a/c unit. I'm in a converted garage (hence the fabulous paneling and lack of central heat/air) and there are some "characteristics" of this space that are fun for a curious little kitty. There is a bird's nest on the other side of the a/c unit. I am not sure if the mother bird was just that stupid or if she really couldn't hear cats on the other side. Little Kitty (Trouble) has the softest, sweetest, most innocent little meow so the birdies wouldn't have heard him over the hum of the a/c. I doubt there are birds in the nest, it being Winter and all but Trouble is determined to find out. Several times a day he tries to find a new way to get to the nest. 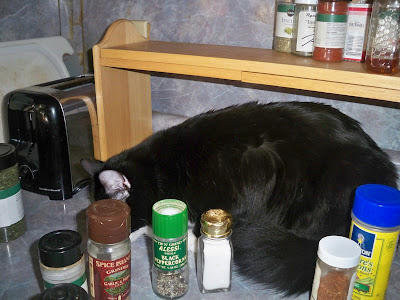 My mom has been hibernating all week, too, recovering from having a tooth pulled and the complications of excess bleeding and infection and all that happy stuff. She must be stir crazy because she decided to rearrange the spices on the counter. Trouble was kind enough to help. 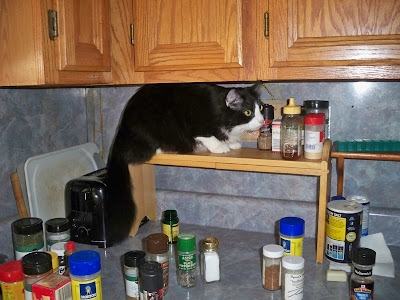 Isn't he a sweet helper? The problem is...when he gets embedded like this is that nobody other than myself can lure him away. He's quite the ... um, ... persistent little fella. He kept trying to claw Mawmaw when she would reach for him... when I reached for him he popped my hand but without claws. He hardly ever claws me, you know, since I'm his "mommy" and carry him around like a baby and cuddle with him at night. He's not mean... he's just a little stubborn. 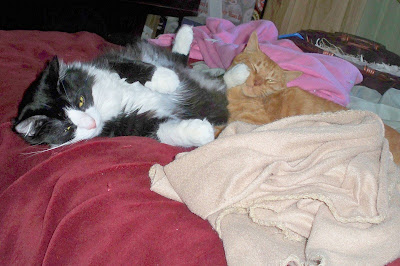 All that hard work rearranging the spices wore poor Trouble out... he had to come relax on his  - I mean MY - electric blanket with my parents' cat,  Eddie. Too bad Eddie's face was in the way. What I really love is the nonchalant way he props his foot on Eddie's face. He
knew he was there... Eddie was hissing and meowing and caterwauling but Little Trouble Kitty was unimpressed. 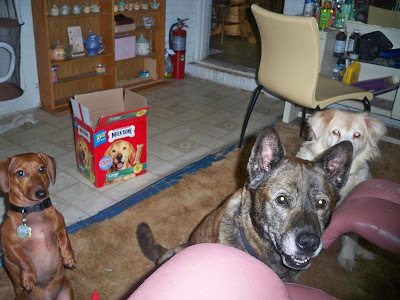 Trouble isn't the only rotten fur baby in our house by far. This is what it looks like when I eat... three dogs to the left... (note that Oscar is "sitting pretty").... 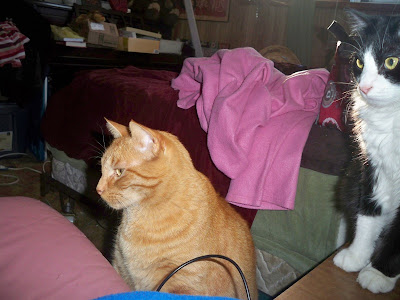 Two or three cats to the right. The dogs stare at my plate... the cats stare at the dogs. Every now and then Trouble has to be an instigator and he sits on the foot rest of my chair.. right beside where Lily (the biggest dog) sits. Lily is a sweetheart of a dog - unless food is involved. Food turns her into a greedy little monster. Trouble thinks it's fun to play Whack a Mole with Lily while she's focused on my plate. Usually Lily doesn't even respond... she has such a laser focus on her prospective scraps. But every now and then... Lily has to claim dibs on my plate and... 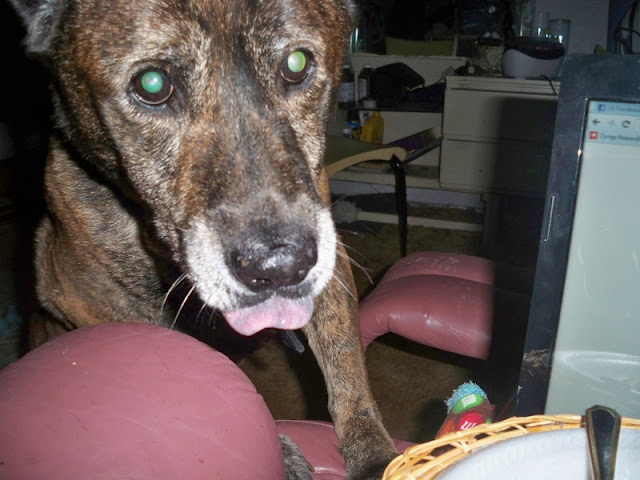 Anyways... I've got a headache... I didn't sleep well last night... I haven't been able to get ahead of the pain for days, despite resting and doing virtually nothing and I missed a decent snowfall at the mountain house this weekend. I had NO idea there was a possibility of snow or I would have gone up there... curled up in the nest and maybe even had a fire in the fireplace. This weekend rates about a 2 on a scale of 1-10.

hope you "recover" and are able to make it through the week!