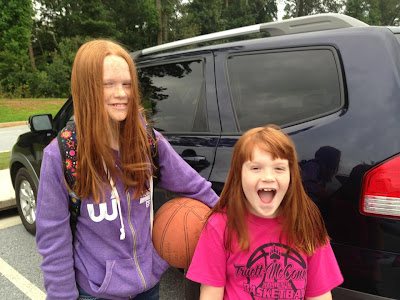 Do you realize that we're approaching the five year anniversary of my journey from hell to Helen? Five years to embrace all that I might have lost. When I moved here my nieces were 5 and 3. They're now 10 and 8. This is a picture of them on their first day of 5th and 3rd grade last week. Yes. Sarabeth took her basketball to school. Recess, you know. They were and continue to be two of my biggest reasons for living and due to my back and Jamie's allergies I just haven't seen enough of them lately. SO OF COURSE when my sister-in-law asked if I could help with some after school pickups this school year I jumped at the chance. Heaven knows I need a reason to get out of the house every now and then! So you can look forward to pictures of something other than cats and the lake. I know you're as thrilled as I am.

I'm watching Mamma Mia which is always a trip down memory lane as Darby and I saw the show in Las Vegas on our wedding day... and then for our first (and only) anniversary we saw the movie in the theatre in Jacksonville. Wicked and Mamma Mia were the soundtrack of our relationship. Sweeney Todd also came out during that time period and it was a favorite of Austin's but that was always in our non-Michael time that we would listen to it. Sweeney Todd was much more appropriate for that dark time.

Austin just woke up from a five hour nap and complained that all the lights were out downstairs. I usually pack up my laptop, chapstick and my styrofoam cup and head to the Whine Cellar between 6 and... 8-ish every evening. I have my little routine. Upstairs to take my night time meds and change into bed clothes... downstairs to enjoy the Whine Cellar and blog and read blogs and watch youtube videos and such. Today has been cool and overcast and time just kept passing without me really moving. I napped for a bit myself this afternoon and woke up to the awesome smell of the stuffed peppers I had going in the crockpot. It's so cool that I had to dig out a pair of fuzzy socks and a sweatshirt which I just put on with my skirt and top. I dress like a homeless person sometimes. And of course, as per usual, it's raining.

I did leave the house for a bit today to pick up another prescription and buy more food. I figured I better get some substantial food in the house before Austin blew his money on cokes and potato chips. It's odd. I alternate between being so glad to have someone here to help me with the things I can't do... and wishing I didn't have to deal with someone so volatile. I can't get through a day without him getting mad about something. Just now it was a very innocent, "do you have any glasses downstairs?" and I got this crazy, over the top outburst about how I blame him for everything. Whatever. Go away. At least his buddies went home for now. Hopefully we'll have a peaceful Sunday.

Possibly I'll have a visit from an old friend tomorrow. It's on the agenda... so we'll see. It will at least give me motivation to shave my legs and put on makeup. My mom decided to stay down on the southside for another week so it's me, the cats and the kids drifting in and out. I could use some company. I am so starved for adult interaction that I kept the poor bag girl out by my car for way longer than it took her to put the groceries in the car. At least it wasn't hot outside.

Anyways... so that's all I've got for today. Hope you're have a great weekend! Love and hugs!

Just poppin' in to say hi. I am trying to read more blogs these days. I have just started using igHome and have a whole tab of nothing but blog RSS feeds and loving it. Makes it easier. I will try to do a blog entry on that soon!

Have a great week!