It's cool today but there's no doubt that Spring is here because I have sneezed a gazillion times this morning. There is so much fluid in my ears that I hear it sloshing around every time I move. I've got watery eyes and feel so miserable. *end of whine* 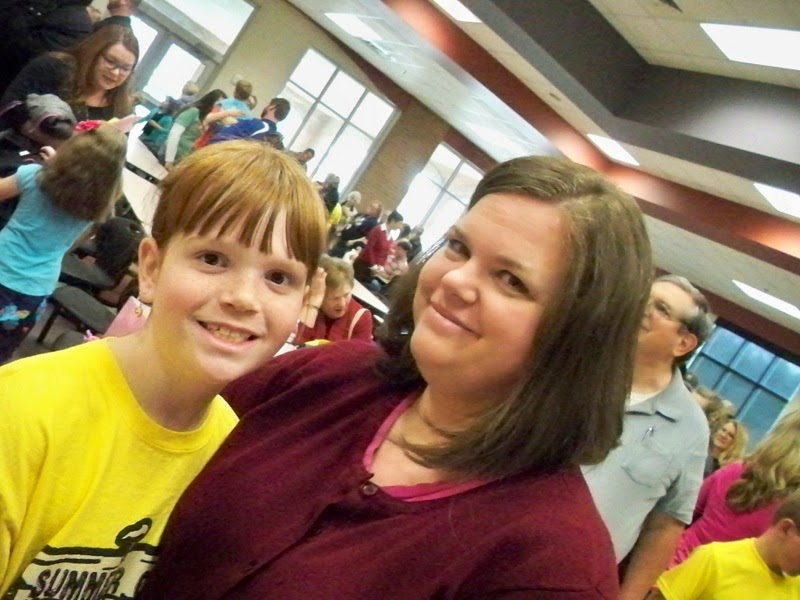 Yesterday was my niece Jamie's Third Grade Musical. There are very few events that I attend- mainly because it just hurts too dang bad to sit for any length of time, especially if travel time is involved. But when your favorite niece has the lead in a musical and her character is named Bonnie Blogger... you endure whatever it takes to be there to support her. Fortunately her school is a short drive from us. The seating was the typical elementary school lunchroom - little seats attached to the table - uncomfortable for everybody over age 10 but really, really miserable for me. By the end of the show my feet were totally numb and I was having currrrazy muscle spasms. It was absolutely worth it and I'm glad I went but my pain level today is off the charts. Combine that with the cold/allergy stuff and I am one big ole barrel of whine today. 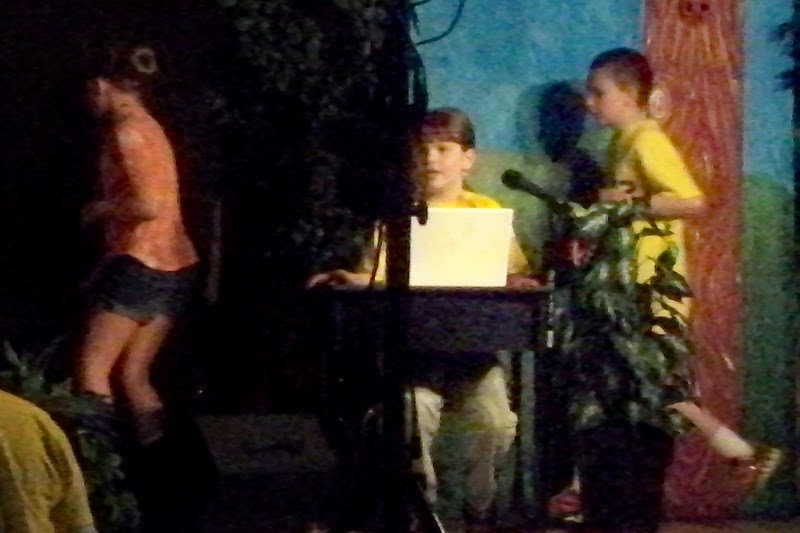 Jamie did a great job, though. She didn't miss any lines (that I could tell) and her solo was (as far as I could tell) on pitch. Her personality really came through in her character. She's just adorable and I was so proud of her that I had to wipe a few tears. I waited a long, long time to have little girls in my life - four brothers, three sons - so I don't take these moments for granted. Not being able to get out and about much also makes me appreciate these milestones even more. My sister-in-law took about a dozen pictures of me with the girls and I joked that she was trying to commemorate the fact that I left the house for a few minutes. My pictures of the performance are blurry because I didn't use a flash and just have my little point and shoot digital camera. 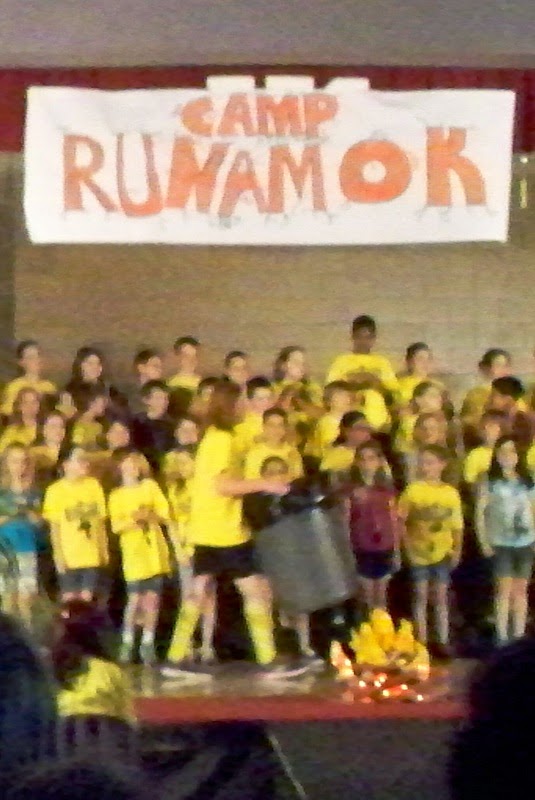 Sarabeth was chosen to be a stage manager/stage hand. She has the personality that would make her an amazing stage manager in theatre. She is very detailed oriented, motivated, organized. She has a great memory. She's comfortable on stage and around the stage. My friend Gina (who is the best stage manager I've ever known) would LOVE to have Sarabeth as an assistant, even at 11 years old. She's just that good.

Here she is removing a prop from the stage in between numbers. Notice how she's dressed like the cast? With her trademark knee socks... when you're as tall as she is you can wear knee socks. Knee socks always hit me around mid-thigh.

The show was about a little girl, Bonnie Blogger, who didn't want to go to Summer camp. It was a cute story and was very entertaining. 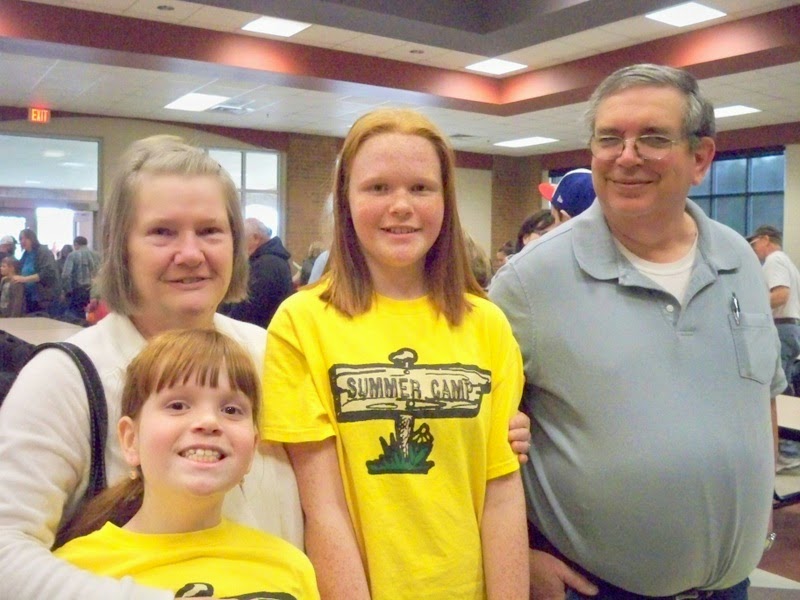 The girls are performing together in the Kiwanis Talent Show on Friday night and I'm gearing my whole week toward being able to attend that performance. My mom is going to the oncologist that day (just a follow up, nothing new) and will be gone for several hours which means I'll have several hours of dog duty. I'm hoping the dogs are cooperative so that I don't expend my minuscule energy supply before time to go to the show. The girls are singing "Anything You Can Do, I Can Do Better" from Annie Get Your Gun. My sister-in-law is involved in the program and she said there are three girls doing "Let It Go" from Frozen. That should be fun (not) but she said they were all good. There is one person doing "Stars" from Les Mis which I'm looking forward to. People always do "On My Own" because it's a pretty ballad that's not very demanding (and I think she said someone is performing that on Friday) but Stars is a bit more ambitious. If I'm really not feeling well I may just go and slip out after the girls' performance. I know that's rude but it's better than not going at all.

Today... I've got the cutest little kitty cat cuddled beside me... I'm wearing my warmest, coziest fleece lined leggings... Grey's Anatomy is on three times today and I had one recorded from yesterday... I had a peanut butter and banana sandwich for brunch... and life is good despite not feeling great. Little Kitty is frustrated because he likes to rest his head on my hand and wrap his front legs around my arm when he naps beside me but I'm using that hand to type.

I mention this often but it's more true lately so I'll mention it again - I'm working my tail off on my genealogy research. Yesterday I was bogged down with Charlemagne for a couple of hours. There's a lot to discover in my family tree that is fun and interesting and neat. There's a lot more that is just boring work. Yesterday was boring and redundant. I've spent a few hours over the past week combining profiles. You'll have William the First in there half a dozen different ways - he may be Guillame I in places, he may be William the Brave (or whatever it is) in others. If you've already researched one branch of your family tree from that person under one name, you don't want to put hours in doing the exact same research for him under a different name. It's time consuming to combine the profiles but worth it in the long run.

That's what's happening so far this week. I have been convinced all morning that it was Wednesday already so I'm having to adjust back into Tuesday mode which is really no different than Wednesday now that I think about it. Have a good one!