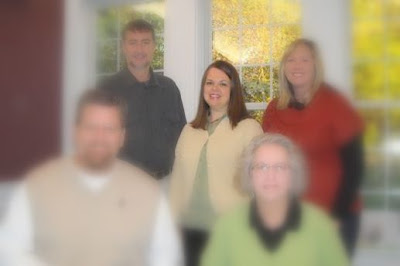 These are my co-workers... I don't have permission to share their photos on my blog so I'm blurring them out. *teehee*
I just thought this was funny because you can see how ridiculously short I am.


I'm determined not to have any more humbugs. I made the russian spice tea last night. Someone asked for the recipe and to be honest... I just toss a bunch of stuff in there and do it by taste but if I had to guess... it's three parts ice tea mix (the powder kind) with lemon... one part tang... and a tablespoon (which seems like a lot but... that's how I do it) each of cinnamon, nutmeg, allspice, ground cloves. I mix the whole deal in a large ziploc bag, it's a lot easier to shake it all up.
You add a generous tablespoon (or two) to a mug of hot water... it's a nice Christmas-y drink.

Today Austin and Logan are making sausage balls. It's a risk... but heck... if they mess up, we just make more. Here's my sausage ball recipe because inevitably, someone always asks for it: 3 cups bisquick (or any baking mix, jiffy works well) mixed with 3/4 cup of water. Add one tube of sausage and one package of shredded cheddar. Again... I play with the amounts of the sausage and cheese depending on my mood. Many people make sausage balls without using water to mix with the baking mix. I've had those. They're ok. This is better, in my opinion.
*Forgot to add cooking instructions* I cook them at 425 until they're slightly browned. Usually we make a huge batch and freeze them raw... then put them out frozen on a cookie sheet to bake. It takes slighly longer but they're still just as good.

I have a dilemma in that Cody really wants me to come down to see him and Marquee on Christmas Day. The dilemma is... that's a lot of holiday driving... I have to work around his time with his dad and her family... although they did invite me to come with them to her family gathering. The weather is supposed to be wet and snowy (depending on where the temps end up... so I could get down there and possibly not be able to get home). Last year was just a clusterf*ck (excuse the word, that's the only way I could accurately describe it) of anti-Heather sentiment on Christmas which was INCREDIBLY hard for me to reconcile in my heart... being uninvited to my family Christmas gathering hurt so deeply... and the fact that Cody and Ryan both made plans that didn't include me. Well. It's not that I can't forgive and forget. My kids were young... they wanted to be together... they couldn't figure out a way to include me and Austin in that... I understand. It HURT but I understand. It's just... well, I don't intend to be the disposable guest. I'm not going to live with the worry, Christmas after Christmas of whether or not I'll be welcome and whether or not I'll fit into someone's plans. I don't want to be a burden or an afterthought. I want to just do it my way, on my terms and not put myself in a position of ever being hurt that way again. It just changed those traditions for me forever. Once I became an optional guest, I realized that I have options myself.

I haven't told Cody absolutely no... but I think the weather, in the end, will be the deciding factor for me.
Ryan made the decision not to come home for Christmas and I supported him in that... mainly because it was an expense he couldn't really bear and I am against any expenditures at Christmas that impact your ability to pay your bills. Plus... he has a girlfriend who he wants to spend Christmas with. They're not at the point of traveling together on the holidays... but he does want to be with her.

I say all of that not because I'm still humbugging. I'm not. I'm actually feeling pretty upbeat today as my strength is coming back and the work week grinds on by and details fall into place... as they always do... I think I'm past the worst of the stress and am just appreciating the season. I guess if anything, I'm just weighing my options out loud and opening the floor for comments (as long as they're not anonymous and rude like those i had yesterday. Jerk.) and input on the whole deal.

Thinking the date with the Bear Hunter is a no-go for tonight. I'll be surprised if it happens. And at this point... I don't really care.

For my Cityville friends... a few tips... expand toward the water so that you can put up a pier and have boats. The boats bring goods and you can free up some of the land you've been using for farming to have more homes/businesses. Also... put up those free franchise spots. Yes, it uses your energy to collect from them and it uses your goods to stock them, but the further along you get, the more stars you get for those businesses and you can even get more energy from them. Some buildings don't have to be connected with the road - your franchise headquarters and storage buildings, for example. If you can put those buildings together, you can save the road space.

For my Frontierville friends... I can't stay signed on. It freezes up. That's why I haven't been on much. Sorry.

I have to make ONE more Walmart run before Christmas. It may happen in the middle of the night to avoid crowds.

I enjoy Christmas music SSOOOOO much during the last week before Christmas. Other than that, it seems premature.

I got the cutest little matching outfits for Sarabeth and Jamie for Christmas. I got them more than just clothes, don't worry.

Hope you have a Wonderful Wednesday!
Oh... and PS... (for Mary's comment) Cody and Marquee DO want me to spend the night Christmas Eve... but they won't be home... they'll be at her family's dinner... they want me to spend the night with my parents (where I have a hard time sleeping) so that I'm there first thing Christmas morning and can be there with C&M then... so that by the time Cody's dad is up and stirring - oh, say, midday probably - they'll have spent their time with me already and can send me back over to my parents' house so that Cody can visit with his dad. I completely support him spending time with his dad... and I understand how tightly knit her family is. They're figuring out how to include everyone and I respect that. I just don't want to be out of my comfort zone to be handy for their obligatory visit with me. In my mind... I'll just make it not obligatory. We'll see each other Christmas Eve morning... and then they're welcome to come back up at any time to hang out with mommy and Austin. Am I missing something?

Nathan woke me up last night not feeling well and I had a fleeting thought of whether he was starting to get sick that would prevent us from doing anything for Christmas and I thought - nice, it would be very nice to just stay home and not go anywhere and not have expectations placed upon us. As much as I would miss our visits with both sides of the family, I could really be okay with just staying home. But, alas, it seemed to just be growing pains and he needed some Advil and mommy-time. I completely understand your dilemma - particularly since you weren't asked to stay with them Christmas Eve - that makes it very hard on you to go back and forth on Christmas Day to be someone else's option. Enjoy spending the night with Jim and Angie and the girls and wake up to those little redheads enjoying Santa's bounty. Even offer to babysit them later in the day so mom and dad can get a nap - for some reason I never get any sleep when Santa visits my house and I'm always a zombie on Christmas Day. Just don't put. yourself in the position of being hurt by others. I remember your frustrations last year. Love you!
Mary

So I am assuming you cook the sausage balls? What temp and for how long? They sound yummy!

Happy holidays Heather! Would you email me your home address, please? I have something to send you.. my email is newsworthy822@aol.com
As always, I love reading your blog.. sorry about the disparaging comments you got. I had to deal with some about my pregnancy fitness routine. Love ya! Melissa